Add an Event
Newswire
Calendar
Features
Home
Donate
From the Open-Publishing Calendar
From the Open-Publishing Newswire
Indybay Feature
Publish to Newswire
Add an Event
Related Categories: Central Valley | Environment & Forest Defense
Delta tunnel plan violates civil rights of non-English speakers
by Dan Bacher
Thursday May 29th, 2014 5:49 PM
Luis Magaña, of the American Friends Service Committee's (AFSC), Proyecto Voz, said in Spanish, "The lack of information available in Spanish about this plan is an injustice against the Latino community that works, enjoys, and lives in the Delta. It is the responsibility of the State of California to inform these communities that will be affected, especially considering the magnitude of this project." 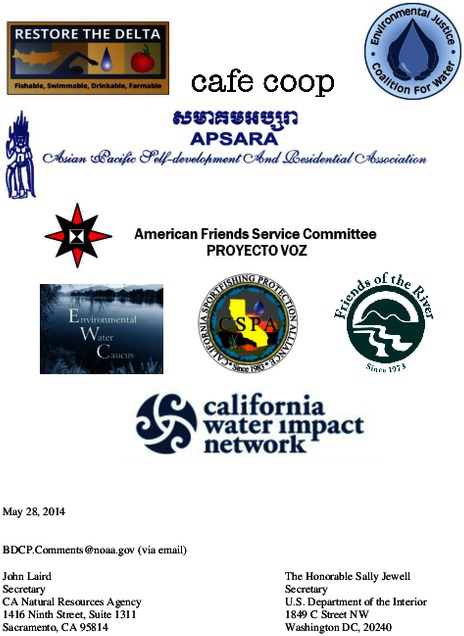 Bay Delta Conservation Plan documents are in English only

Natural Resources Agency Secretary John Laird and other state officials have repeatedly claimed that the Bay Delta Conservation Plan to build the peripheral tunnels would be “fair, open, and transparent,” but a panel of environmental justice experts today exposed this claim as false when they revealed the blatant institutional racism that permeates the controversial process.

Restore the Delta (RTD) and environmental justice advocates charged the Brown Administration with violation of the civil rights of more than 600,000 non-English speakers in the Delta by its agencies' failure to provide for “meaningful access to and participation” in the Bay Delta Conservation Plan (BDCP) public comment period.

The groups said the state and federal agencies failed to make the EIR/EIS available in any languages other than English. Restore the Delta, the Environmental Justice Coalition for Water, Asian Pacific Self-Development and Residential Association, Café Coop, Lao Family Community Empowerment, Environmental Water Caucus, California Sportfishing Protection Alliance, California Water Impact Network (C-WIN), and Friends of the River released a letter calling on State and Federal officials to restart and extend the public comment period for the BDCP and its EIR/S, and to do adequate public outreach to limited English speakers.

“In particular, we request that the agencies hold public hearings and provide interpreters; translate vital documents such as, at the very least, the Executive Summary of the draft EIS/EIR; and provide affordable access to documents to allow the thousands of low-income and limited English speakers to have meaningful participation in the process,” the letter stated.

The groups said the failure to translate materials into languages non-English speaking Delta residents can understand is “especially problematic” as the EIR/EIS reveals increased mercury fish tissue concentrations will result from implementation of the BDCP, according to a statement from the groups. You can hear the audio of today's press press conference featuring representatives from Restore the Delta and environmental justice groups by going to: http://www.centralvalleybusinesstimes.com/links/rtd%20presser.mp3

"More than 600,000 Delta residents alone don't speak English, and are being shut out of the public comment process on this massive project that would affect them deeply," said Esperanza Vielma, executive director of Café Coop & Environmental Justice Representative, San Joaquin County/San Joaquin Valley Air Quality Board. "The Brown Administration is violating the civil rights of Limited English speaking Californians in its rush to build tunnels to serve the top 1% of industrial agriculture."

She emphasized that there are 47 adverse and unavoidable impacts of the BDCP listed in the EIR, including reductions in water quality and limiting of public fishing access, but these documents aren’t provided in any other language than English.

Luis Magaña, of the American Friends Service Committee's (AFSC), Proyecto Voz, said in Spanish, "The lack of information available in Spanish about this plan is an injustice against the Latino community that works, enjoys, and lives in the Delta. It is the responsibility of the State of California to inform these communities that will be affected, especially considering the magnitude of this project."

Additionally, statistics from the American Community Survey of 2012 for the five Delta counties reveal that 571,188 individuals speak languages other than English and do not "speak English very well." These individuals represent roughly 14 % of the 4 million residents who live in the five Delta counties (San Joaquin, Sacramento, Solano, Yolo, Contra Costa), according to the group.

Elizabeth Peang, of the Asian Pacific Self Development and Residential Association (APSARA), said that 15,000 Delta Cambodian residents have not been able to access the BDCP documents, since they are are in English only.

“Cambodian Americans are part of the socio-economic group with the highest poverty rates in Stockton and California,” said Peang. “The Delta is important to our Cambodian constituents, who go fishing and boating all the time there, and also become employed as farmworkers there. The several Delta fish species provide an important and affordable staple to our diet. The Bay Delta Conservation Plan's twin tunnels will affect the health, dietary and recreational lifestyle for many families in the Delta region.”

“A majority of adults in our Cambodian community are not fluent and literate in English. We have not received any informational materials about the BDCP in Cambodian to educate or to provide to our community in Stockton,” she added.

Javier Padilla Reyes, Latino Outreach Director of Restore the Delta, said, "Since Gov. Brown intends to have no vote regarding the tunnels, it is outrageous that state and federal officials prevent and separate Latino, Hmong, Filipino, and Indigenous Tribes and communities from the debate by ignoring them. More time is needed for these communities to receive and review materials they can understand, and to comment on the project."

Colin Bailey, Environmental Justice Coalition for Water, said, "While a very limited amount of outreach material can be found on the BDCP website in Spanish, the plan itself and its corresponding Draft EIS/EIR have not been translated into Spanish. In particular, the EIS/EIR identifies forty-seven adverse and unavoidable impacts (Chapter 31 EIR/EIS) that will have a direct impact on residents of the five Delta counties.The majority of Spanish, Cambodian, and Hmong speakers have not been made aware of these impacts, let alone that there is presently an ongoing comment period regarding the BDCP, or that the project exists."

While BDCP officials are engaged in numerous civil rights violations, Bailey noted that the groups aren't planning any legal action at this time.

“As a legal matter, that question is not yet ripe,” said Bailey, an attorney. “There would be no cause of action that you could take to court until the certifications are given to the EIR process.”

Steve Hopcraft of Restore the Delta, added, “We understood the Governor has been quite blunt in that he has already chosen the tunnels. The administration has spent $250 million on the BDCP process, but not one cent on the translation of documents. They have not translated one page of the EIR nor placed one notice of public meetings in the media in other languages than English. Again there has not been one word, one page or one attempt to translate the documents for the 20 percent of Californians who are non-English speakers and pay billions of dollars in taxes!”

According to the letter from the groups, the violations of the state and federal laws by BDCP officials include but are not limited to the following.

• CEQA participation requirements— CEQA requires a process that provides an opportunity for meaningful participation of the public. According to Public Resources Code Section 21061: “The purpose of an environmental impact report is to provide public agencies and the public in general with detailed information about the effect which a proposed project is likely to have on the environment; to list ways in which the significant effects of such a project can be minimized; and to indicate alternatives to such a project.”

• Title VI of the Civil Rights Act of 1964 provides: “No Person in the United States shall, on the ground of race, color, or national origin, be excluded from participation in, be denied the benefits of, or be subjected to discrimination under any program or activity receiving Federal financial assistance.”

• California Government Code section 11135 (a) and implementing regulations in the California Code of Regulations Title 22 Sections 98211 (c) and 98100. Government Code 11135(a) provides: “No person in the State of California shall, on the basis of race, national origin, ethnic group identification, religion, age, sex, sexual orientation, color, genetic information, or disability, be unlawfully denied full and equal access to the benefits of, or be unlawfully subjected to discrimination under, any program or activity that is conducted, operated, or administered by the state or by any state agency, is funded directly by the state, or receives any financial assistance from the state.”

• The Dymally-Alatorre Bilingual Services Act—Government Code Sections 7290-7299.8 which requires that, when state and local agencies serve a “substantial number of non-English- speaking people,” they must among other things translate documents explaining available services into their clients’ languages.

Not only does the Brown administration violate the civil rights of non-English speakers, but the BDCP process violates the UN Declaration on the Rights of Indigeous Peoples and numerous state and federal laws protecting California's indigenous nations.

"The Delta Tunnel plan violates the Declaration of Indigenous Peoples Rights!" said Caleen Sisk, Chief and Spiritual Leader of the Winnemem Wintu Tribe. "These twin tunnels will kill the largest Estuary that keeps California….CALIFORNIA! When that happens it will bring changes no one can imagine right now….it will as Mother Nature wants."

Restore the Delta is a 15,000-member grassroots organization committed to making the Sacramento-San Joaquin Delta fishable, swimmable, drinkable, and farmable to benefit all of California. Restore the Delta works to improve water quality so that fisheries and farming can thrive together again in the Sacramento-San Joaquin Delta. http://www.restorethedelta.org