Newswire
Calendar
Features
Home
Donate
From the Open-Publishing Calendar
From the Open-Publishing Newswire
Indybay Feature
Publish to Newswire
Add an Event
Related Categories: International | Anti-War
No to US Militarism in the Philippines and Asia-Pacific!
by Scrap VFA Movement
Wednesday Apr 30th, 2014 6:01 AM
“To achieve enduring peace in the region, Asia must be de-militarized; its maritime waters assigned mainly for commerce; and its disputed territories declared as regional commons and war-free zones.” 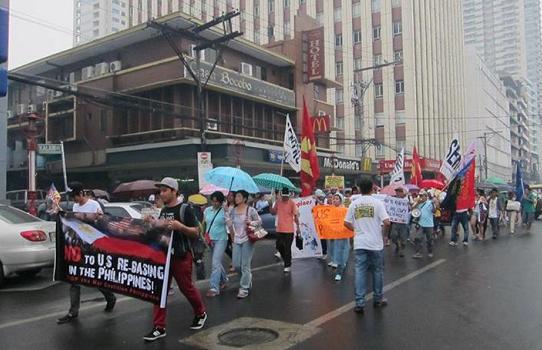 The Scrap VFA! Movement made this assertion during a rally held near the Malacañang Palace where US President Barack Obama and President Benigno S. Aquino III are scheduled to meet Monday afternoon.

The call for demilitarization is primarily addressed to both the US and China. China is locked in bitter territorial disputes with its neighbours, particularly the Philippines, Japan, Taiwan, Vietnam and South Korea. On the other hand the US, under Obama’s “pivot to Asia” plan, is realigning its forces in Asia by securing permanent and temporary military basing agreements with regional allies.

One such new basing agreement is the Enhanced Defense Cooperation Agreement (EDCA) between the US and the Philippines.

The Scrap VFA! Movement said the EDCA must be opposed, “not because it is illegal but mainly because it will be utilized by the US as a binding instrument for waging senseless wars in the region.”

According to the movement, Obama’s Asia tour was aimed at consolidating military and legitimizing his controversial “Asia Pivot” program. His “Asia Pivot,” the group said, is not about peace or regional security but on the contrary, a major re-arrangement of US forces in preparation for a major war.

“When US made known its “Asia Pivot” plan, we saw no other logic to it but war, with the US preparing in advance for a major confrontation with its rising strategic challenger, China,” said the Scrap VFA Movement.

The Philippines, it said, should rather call on both the US and China to back-off or at the least, do not play host to these warring superpowers.

Many observers likewise believe that it was Obama’s “Pivot to Asia” plan that forced the hawks in China to rapidly build its defense capabilities and to flauntingly assert its position as regional power to deter perceived encirclement by the US.

The movement said war may not be imminent but a single spark, for example a mishandling of territorial disputes between China and the Philippines, can start a prairie fire.

On the visit of Obama, the Scrap VFA! Movement expressed disapproval of the hegemonic agenda the US is imposing over Asia by military means, and economically through the Asia-Pacific Economic Cooperation (APEC) and the Trans-Pacific Partnership (TPP) agreements.

It also criticised Obama for acting like the world’s redeemer while in truth he is miserably failing at home.

“Filipinos may have a better view of the United States compared with other people, according to a recent survey, but for patriotic Filipinos who know the chequered history of US-RP relationship and who are aware of the current state of affairs in the US, its imposing presence in the region is a threatening concern,” the group concluded.

A Statement of Concern:The Continuing Surrender of Philippine Sovereignity

The 8th round of talks between the Philippine Department of National Defense (DND) and the US Defense Department finalized the draft on Enhanced Defense Cooperation Agreement (EDCA) between the two countries. This new agreement will be one of the highlights of U.S. Pres. Obama’s visit in the country at the end of the month.

Until now, the US remains to be the dominant superpower in the country and continues to extend its influence on the affairs of the country. After the termination of US bases in 1991, both the US and the Philippine governments were already “considering ways to bring US troops back in the country on ‘mutually agreeable’ terms.” Political expediency dictates that US bases would not be built in the country for these were “perpetual symbols of colonization, foreign domination and infringement on Philippine sovereignty.”

On the same year, both agreed to pursue the bilateral exercise, “Balikatan” (Shoulder-to-Shoulder) along with customary military activities such as ship visits, aircraft transit, and US aid during Philippine natural disasters. In 1996, the annual Balikatan exercise was substantially larger than in previous years, and for the first time, involved all branches of services from both countries including one Philippine and one US army brigade.

For the next two years, US and Philippine negotiators deliberated over what would become the Visiting Forces Agreement (VFA). With President Estrada’s imprimatur, the VFA was signed by the two countries in 1998 and ratified by the Philippine Senate in 1999. The government described the VFA as the implementing agreement of the Mutual Defense Treaty (MDT). Circumventing the constitution, VFA did not clearly define how often and how long US forces were allowed to “visit”, or limit their scope of travel throughout the country.

By 2001, The US Joint Special Operations Task Force- Philippines (US JOSTF-P) was formed as part of the US’ Operation Enduring Freedom. It was directly under the US Pacific Command and made the whole of Mindanao as its operational area. The task force consists of rotating units of special forces of the U.S. Army and Air Force, Navy SEALS, Psychological Operations, and other U.S. military personnel. Since the middle of the last decade, an average of 500-600 JSOTF-P personnel (down from nearly 2,000 in 2003) are deployed in the country.

Now comes EDCA, a document described as anchored on the “mutuality of benefits”. Simply put, it is a new basing access arrangement for US troops. The new agreement will allow an increase of number of US troops in the country, allow US troops access to all Armed Forces of the Philippines (AFP) facilities and increase the pre-stationing or storage of US materials (weapons, ammunitions), aircraft, sea craft, land transport and all sorts of logistical supplies.

The new agreement is also linked up in the building of the country’s minimum credible defense. Still, the new agreement does not commit the US to spend in modernizing the country’s defense especially with our expansive archipelagic territory. It is the Philippine government that will spend on upgrading of former US military infrastructures and building of new ones in new sites for the use of US troops. The money will come solely from the national coffers, specifically from the budget for defense as well as from the presidential discretionary fund. In other words, it is the people who will spend for the use and stay of US troops in our facilities.

With this new challenge and situation, let us pool all our efforts to frustrate the latest maneuvers of the US infringing on our national sovereignity. 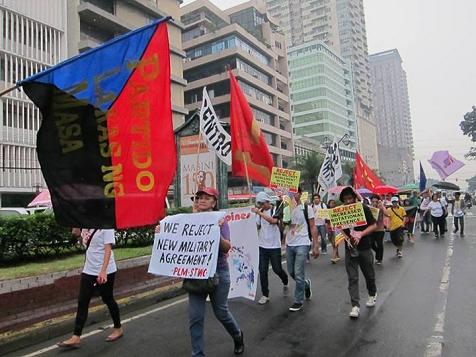