Add an Event
Newswire
Calendar
Features
Home
Donate
From the Open-Publishing Calendar
From the Open-Publishing Newswire
Indybay Feature
Publish to Newswire
Add an Event
Related Categories: California | Central Valley | Environment & Forest Defense | Government & Elections
Restore the Delta calls for investigation into water mismanagement
by Dan Bacher
Thursday Mar 20th, 2014 8:46 AM
“Unfortunately, at the Hearing on Immediate and Long-Term Relief for Drought-Impacted San Joaquin Valley, no discussion is focused on the needs of Delta farming and fishing communities, coastal fishing communities, or the health of the SF Bay-Delta estuary. No discussion is intended to focus on gross mismanagement by the Department of Water Resources and the Bureau of Reclamation that has helped bring us to the precipice during this water crisis,” said Barrigan-Parrilla. 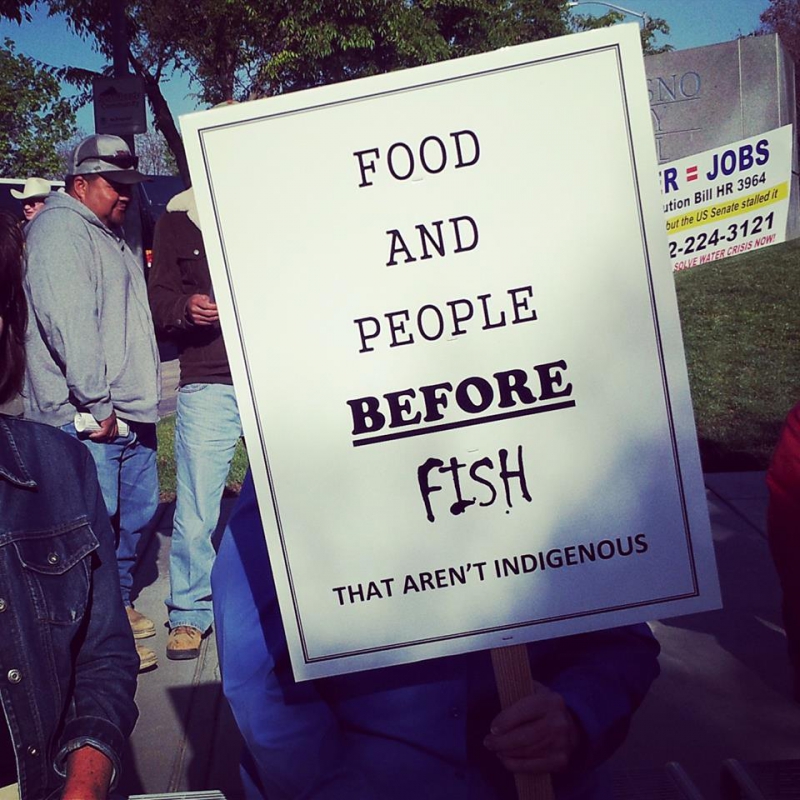 As supporters of corporate agribusiness interests carried signs proclaiming "Food and People Before Fish" at a Congressional field hearing in Fresno, Restore the Delta (RTD) today called on the federal government to provide drought relief to Delta farmers and business owners and to investigate the mismanagement of water resources in California.

Apparently, the public relations folks who crafted the signs didn't understand the irony of the fact that salmon and other fish that depend on the Sacramento River and the Bay Delta Estuary provide food for millions of people in the state of California - and support thousands of jobs in a multi-billion dollar industry.

Nor did they understand the irony of the fact that the same corporate agribusiness interests that are supporting legislation to eviscerate protections for Central Valley Chinook salmon and Delta smelt are supporting a peripheral tunnel plan that will take large tracts of Delta farmland, some of the most fertile on the planet, out of agricultural production in order to keep irrigating toxic, drainage impaired lands on the west side of the San Joaquin Valley. Aren't Delta and Sacramento Valley farmers who will suffer from the construction of the twin tunnels food producers also?

RTD Executive Director Barbara Barrigan-Parrilla told the House Natural Resources Committee field hearing “we are on the verge of losing Delta farms and our salmon and other fisheries. Where is the drought aid for Delta businesses being harmed: marinas that won't have business; cattle farmers who won't have water for their cattle; recreation businesses that won’t have visitors?”

Barrigan-Parrilla criticized the Committee for its exclusive focus on south-of-Delta water exporters. “There's not enough water to keep salt out of the Delta and deliver water to Firebaugh at the present time. The south-of-Delta growers who rely on water exports don't have water this year because they over-used Delta water last year, exceeding the amount that the State said was safe. Now, they want the rest of us to pay for their miscalculation.”

Barrigan-Parrilla told the House Natural Resources Committee that their framing the issue as a “3-inch fish over people” is “inaccurate, and harmful to solving California’s challenges.”

“This committee is blinded by its desire to serve a few huge industrial agribusinesses. The decline of our fisheries is a red-alert warning that water mismanagement threatens all of us: farmers, fishermen and urban residents,” said Barrigan-Parrilla. “Taking more water out of the Delta is not going to solve our problems. It’s the drought, not the Delta, that’s affecting the water supply this year.”

“Unfortunately, at the Hearing on Immediate and Long-Term Relief for Drought-Impacted San Joaquin Valley, no discussion is focused on the needs of Delta farming and fishing communities, coastal fishing communities, or the health of the SF Bay-Delta estuary. No discussion is intended to focus on gross mismanagement by the Department of Water Resources and the Bureau of Reclamation that has helped bring us to the precipice during this water crisis,” said Barrigan-Parrilla.

“There is no focus on how upstream reservoirs at the beginning of 2013 were over 100% of historical average storage, and how by the beginning of 2014 they were at dangerously low levels," she asked. "This Committee should investigate how the State has promised 5 times more in water rights than there is water available in the system during years of average rainfall. This Committee should investigate how water officials have failed to plan for drought management, even though droughts occur 40% of the time in California.”

You can read my investigative piece on the egregious mismanagement of Central Valley reservoirs and rivers in 2013 here: http://www.dailykos.com/story/2014/02/07/1275862/-The-Emptying-of-Northern-California-Reservoirs

Barrigan-Parrilla also asked the Committee should examine how, even in 2013, the Westlands Water District continued to plant almond trees, bringing their total almond acreage to 79,000 acres, despite knowing they are only guaranteed surplus water in the system.

"This Committee should investigate how drainage-impaired, toxic lands are being fallowed this year because those lands would require three times the amount of water used to leach salt, in order to begin leaching boron in the soil which worsens with drought,” said Barrigan-Parrilla. “This Committee should confront whether these drainage impaired lands should be removed from production to free up water, a finite resource, for better uses. (West side SJ Valley ag contributes only .3% to the state’s GDP.)”

“There are calls to turn on the pumps today, even though we are looking at zero outflow this summer, and without outflow, the water exporters will begin pumping salt water from the Delta. There is plenty of talk about how the Delta tunnels, part of the mis-named Bay Delta Conservation Plan, will bring growers water reliability. But, if the tunnels were already constructed they would be dry today, they would not protect fisheries, and the Delta region would be transformed into an industrial eyesore. We cannot build our way out of droughts.”

RTD called on the Natural Resources Committee to hold field hearings in the Delta to learn about the Delta’s $5.2 billion agricultural economy on California’s largest strip of prime farmland --- which could be harmed by salt water intrusion this summer. The drought is creating havoc for Delta and coastal fisheries.

“The Federal Government has already spent $2.89 billion on BDCP planning and the Federal budget contains another $327,000,000 in BDCP funding for 2015 – which will not bring any drought relief to California. Such funds would be better spent on projects that promote regional self-sufficiency. Recycling, groundwater cleanup, conservation and storm water capture would make millions of acre-feet of new water for the state, and break dependence on the Delta," Barrigan-Parrilla concluded.

The Bay Delta Conservation Plan to build the peripheral tunnels will haste hasten the extinction of Sacramento River chinook salmon, Delta smelt, longfin smelt, green sturgeon and other fish species, as well as imperil the salmon and steelhead populations on the Trinity and Klamath rivers. The so-called "habitat restoration" proposed under the widely-opposed plan will take vast tracts of Delta farmland, some of the most fertile soil on the planet, out of agricultural production in order to continue irrigating mega-farms located on toxic, drainage-impaired land on the west side of the Joaquin Valley. The water destined for the proposed tunnels will also be used by the oil industry for steam injection and fracking operations to extract oil from Monterey Shale deposits in Kern County.

Restore the Delta is a 15,000-member grassroots organization committed to making the Sacramento-San Joaquin Delta fishable, swimmable, drinkable, and farmable to benefit all of California. Restore the Delta works to improve water quality so that fisheries and farming can thrive together again in the Sacramento-San Joaquin Delta. For more information, go to: http://www.restorethedelta.org
Add Your Comments
Support Independent Media
We are 100% volunteer and depend on your participation to sustain our efforts!