Hundreds of Palestinians assembled and erected a protest village in the occupied West Bank on Friday, 31 January. By Monday morning, Israeli military forces had the area surrounded and had arrested several activists en route to the area. 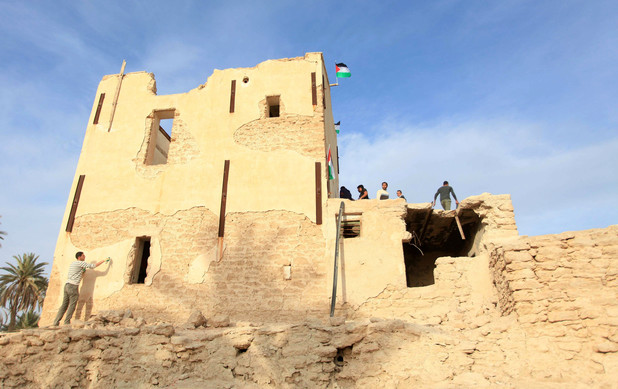 Palestinians are reclaiming the ancient village of Ein Hijleh in the Jordan Valley area of the occupied West Bank. (Issam Rimawi / APA images)

Organizers announced a new campaign — Milh al-Ard (Arabic for “Salt of the Earth”) — in response to Israel’s ongoing efforts to colonize and annex the Jordan Valley. The protest village is situated among the ruins of Ein Hijleh, an historic Palestinian village forcibly depopulated by Israel’s army in the 1967 war.

Groups of Palestinians came from across present-day Israel, occupied East Jerusalem and the broader West Bank. As of Friday night, Diana Alzeer, spokesperson for the Popular Struggle Coordination Committee (PSCC), estimated that around 500 persons were camped out in Ein Hijleh.

“We brought over 40 people in buses and cars,” Bassem Tamimi, a prominent Palestinian activist from the village of Nabi Saleh, told The Electronic Intifada. Other large groups came from places like Bilin, Ramallah, Abu Dis and Dheisheh refugee camp. There was also a small presence of activists from the International Solidarity Movement.

Tamimi added, “Our whole families came, including our wives and children because we cannot be truly liberated from the occupation if they do not struggle alongside us.”

On the side of an Israeli highway that dissects the West Bank, the land of Ein Hijleh belongs to the Orthodox Church and is surrounded from all sides by Israeli army bases, settlements and closed military zones.

On Friday morning, one bus of activists with the PSCC was stopped by Israeli military forces at a “flying” (temporary) checkpoint between Ramallah and Jericho. After being told they were forbidden from passing, activists got off the bus and marched past the soldiers and began directing traffic themselves. With the soldiers confused and distracted, the passengers subsequently got back on the bus and continued to Ein Hijleh.

Army “could not stop us”

Over the weekend, Israeli soldiers began to limit access to the area, closing parts of Highway 90 and reportedly turning away journalists and activists. Though soldiers have tried to prevent activists from delivering food and supplies to the village, the campers were able to receive food from families from the surrounding communities.

Mustafa Barghouti, a Palestinian politician and activist, told The Electronic Intifada that the event brought out a “fantastic level of participation,” particularly among Palestinian youth.

The action is “also a great organizational success because the Israeli army could not stop us,” Barghouti added. “They spread a huge number of soldiers everywhere, but they didn’t know where we’re going and how we’re going to get there.”

Within hours of arriving, the Israeli military had the area surrounded on all sides. Though highways and dirt paths leading to the area were spotted with military jeeps and border police, people continued to pour into the area well into Friday evening.

By Saturday morning, however, Israeli occupation forces had begun to prevent journalists and activists from reaching Ein Hijleh. Campers reported that they had begun rebuilding old uninhabited homes in the village.

Campers in Ein Hijleh are sleeping in the remains of homes and tents. They have brought with them supplies, such as electricity generators, gas, food and drink.

“Linking to our history”

“We are building on several [previous] direct actions,” explained Alzeer. “But this is different because we are actually reclaiming a Canaanite village that used to exist, actually linking it to our Palestinian history on the land and our existence [here].”

But the most important aspect of this latest direct action, Alzeer added, is “that it is taking place in the Jordan Valley.”

The vast majority of the Jordan Valley falls within Area C, the 60 percent of the West Bank designated to full Israeli military and civil control by the Oslo accords.

According to a report by the Israeli human rights group B’Tselem, more than 64,000 Palestinians lived in the Jordan Valley in 2009. They were vulnerable to Israeli military attacks and forced evictions, the report stated. Additionally, nearly 10,000 Israeli settlers lived in Jewish-only settlements across the Jordan Valley (“Dispossession and exploitation: Israel’s policy in the Jordan Valley and northern Dead Sea,” May 2011 [PDF]).

In recent months, several Palestinian communities across the Jordan Valley have been demolished. Last Thursday, homes and structures belonging to over a dozen families were razed by Israeli bulldozers in the Palestinian community of Khirbet Jamal (“Soldiers Invade Homes, Conduct Training, In West Bank Village,” IMEMC, 30 January 2014).

On 8 January, Israeli forces attacked the shepherding community of Khirbet Ein Karzaliyah, leaving 25 persons — 15 of them minors — without shelter in harsh winter conditions. Israeli authorities confiscated the tents given to the displaced families by the International Committee of the Red Cross (“Israeli authorities demolish Palestinian shepherding community in Jordan Valley,” B’Tselem, 8 January 2014).

On 16 September last year, more than 120 persons were displaced from Khirbet al-Makhul after Israeli military and police forces bulldozed the homes of 12 families.

Home to a vast array of natural resources, the area has been repeated plundered by Israel. B’Tselem stated that 77.5 percent of the Jordan Valley is off limits to the indigenous Palestinian population.

“The Jordan Valley is one of the most fertile areas in Palestine, in terms of agriculture, in terms of water resources [and] minerals,” said Alzeer.

“Palestinians have been evacuated from the Jordan Valley. Their houses have been demolished constantly. Land is being confiscated and we have no access to using water.”

In other areas of the Jordan Valley, communities have been uprooted so that Israel’s military can build training areas known as “firing zones.”

In the unlikely event of a US-brokered two-state solution between Israel and the Palestinian Authority, Israeli officials have repeatedly insisted that the Jordan Valley will remain under Israeli control.

In late December, an Israeli ministerial committee voted in favor of a bill to annex the Jordan Valley.

Under the US Secretary of State John Kerry’s proposed plans for the future of the valley, the area would be gradually transferred from Israeli control to that of the Palestinian Authority over an unspecified period of time. The area would be patrolled by Israeli drones, according to right-wing Israeli media reports (“Netanyahu: I will not evict Israelis from the Jordan Valley,” Arutz Sheva, 24 January 2014).

The current negotiations between Israel and the Palestinian Authority, Diana Alzeer added, “are aiming to establish a Palestinian state that is completely disfigured and that will exclude the Jordan Valley … and this is something that we completely refuse.”

“We will never give up”

Mustafa Barghouti echoed these sentiments. Protesters, he said, had gathered to resurrect “this village to send a message to the Israelis and the world that we will never give up the Jordan Valley.”

Barghouti added that “change can happen only by changing the balance of power through popular resistance — acts like this one — and through boycott, divestment and sanctions campaigns worldwide,” referring to the growing international campaign that calls for an economic, cultural and academic boycott of Israel until it complies with international law.

These most recent protest villages are only the latest in a lengthy series of Palestinian direct actions against Israel’s policies of expropriating Palestinian land for settlements and military installations.

In January 2013, hundreds of Palestinians declared the protest village of Bab al-Shams in the so-called E-1 area between Jerusalem and Maale Adumim, an Israeli settlement deep inside the West Bank. Israeli military forces swarmed the encampment in the dead of night, evicting everyone. Many of the protesters were beaten and arrested.

More than half a dozen similar protest villages sprung up across the West Bank during the following months. They were all destroyed by Israeli forces.

“This is about rebuilding the spirit of popular resistance in Palestine,” Barghouti said.

Patrick O. Strickland is an independent journalist and frequent contributor to The Electronic Intifada. His writing can be found at www.patrickostrickland.com. Follow him on Twitter: @P_Strickland_.

END_OF_DOCUMENT_TOKEN_TO_BE_REPLACED
Add Your Comments
Support Independent Media
We are 100% volunteer and depend on your participation to sustain our efforts!