Add an Event
Newswire
Calendar
Features
Home
Donate
From the Open-Publishing Calendar
From the Open-Publishing Newswire
Indybay Feature
Publish to Newswire
Add an Event
Related Categories: California | Santa Cruz Indymedia | Education & Student Activism | Labor & Workers
Student Academic Workers Strive to Bring Many Voices When Bargaining with UC Managers
by Alex Darocy (alex [at] alexdarocy.com)
Friday Nov 1st, 2013 9:51 PM
University of California student academic workers from around the state who serve as union negotiators gathered at UC Santa Cruz to meet with UC managers during the second day of the northern California bargaining session on October 22. To bring more voices to the process, a rally at Quarry Plaza was held where speakers were heard, which was followed by a march to the Humanities 1 building. When the large group of mostly graduate students reached the bargaining location, which was on the first floor of the building, managers were hiding on the fourth floor. They kept the crowd waiting for a short period, but did eventually come out after the group sang a round of Melissa Etheridge's "Come to My Window." Management would eventually listen to testimonials from student workers and supporters who lined up to voice their concerns. [Top video: student workers sing "Come to My Window" to UC managers]
Copy the code below to embed this movie into a web page:
Download Video (11.5MB) | Embed Video
Student worker demands revolve around wages, student families, the quality of education, and social justice issues. They are members of UAW Local 2865, the union that represents more than 12,000 Academic Student Employees, readers, tutors, TAs, and others at the nine teaching campuses of the University of California. The Union gives them the power to bargain with UC management over salary, benefits, workload, grievance procedures, fair hiring processes, and other issues.

University of California teaching assistants are paid about $16,970 per academic year, which they say is $3000 to $5000 less than comparable institutions. UC student workers want to be paid a living wage, and they say the UC system's offer of 1.5% per year for three years will more than likely not keep up with inflation. They say that in reality it will be a pay cut for them.

Health care is also at issue, which student workers say is unaffordable for teaching assistants with children. The union is demanding that the University of California provide affordable health care and improve the child care subsidy.

Additionally, student workers say that due to increasing class sizes, the UC is overworking TAs, which has negatively impacted the quality of education for undergraduates.

The student academic workers union strives to create a process of open bargaining where members are invited to all meetings with UC management. This was especially evident when the large group marched to the humanities building on October 22.

Care was taken to approach the area quietly so as not to intimidate management. Organizers were hoping managers would listen to what individuals had to say, and asked the group not to get loud unless management refused to come down or took too long.

In the past, the union says they have won full fee remission (it had been ~66%, they say), higher wages, health care, and child care reimbursement through the bargaining process.

After the October 21-22 bargaining session, the union reported on their website that three issues central to their membership were negotiated at UC Santa Cruz: Quality of Education: Class Size and Compensation; Student-Family Support; and Non-Discrimination in Access to the Workplace.

The student workers' contract has been extended until November 5, but it may expire after that date, which means that their “no-strike clause” may no longer be in effect. As a result, the union membership will be voting this coming week on whether or not to grant union representatives the authority to initiate a strike if need be. 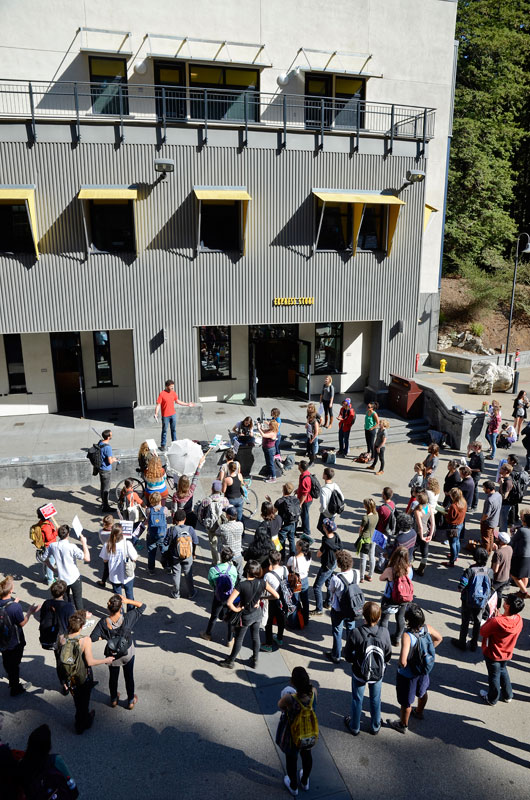 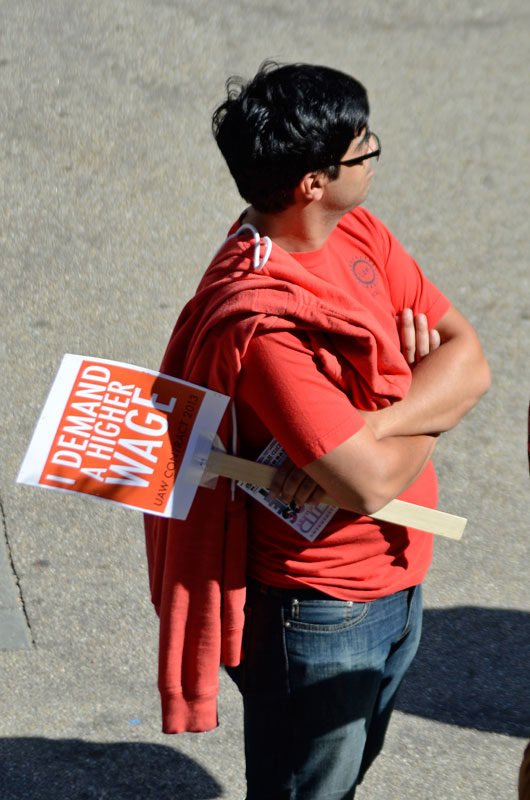 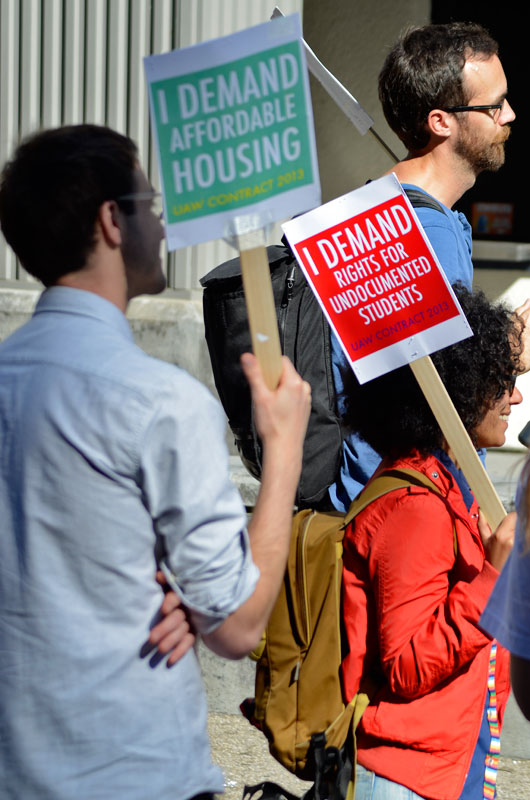 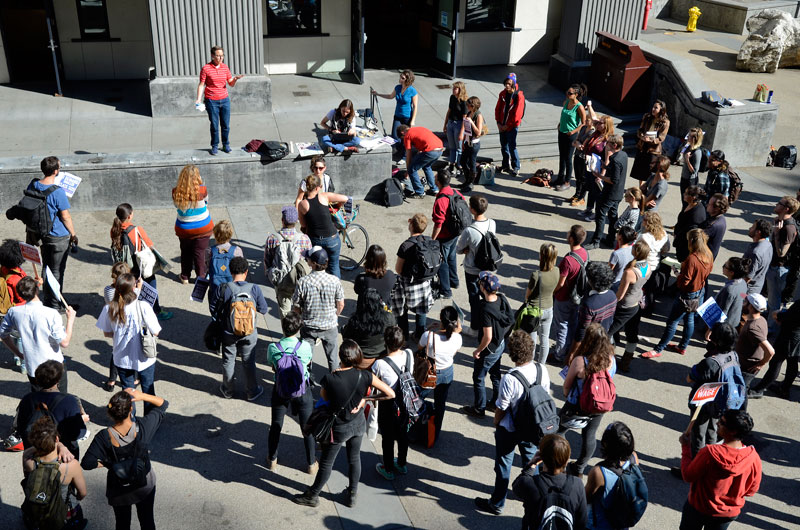 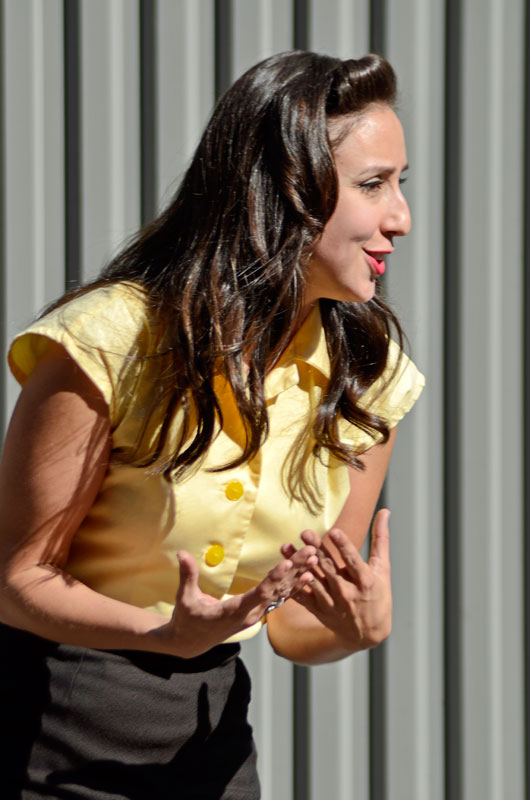 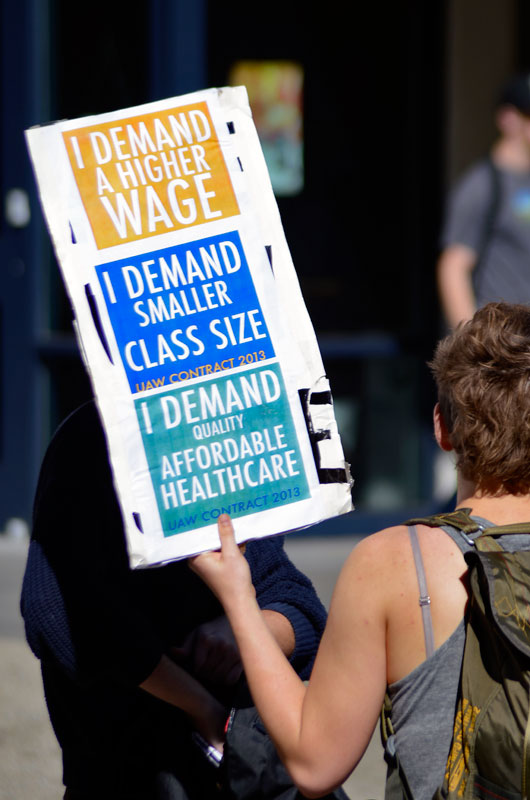 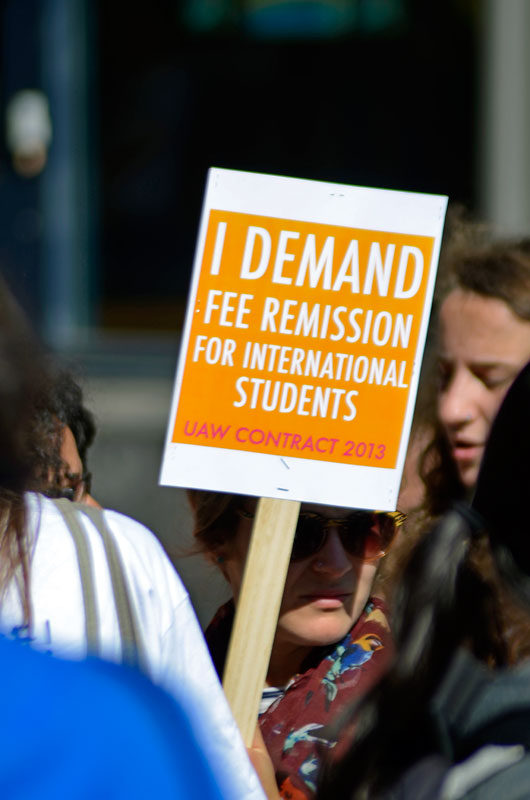 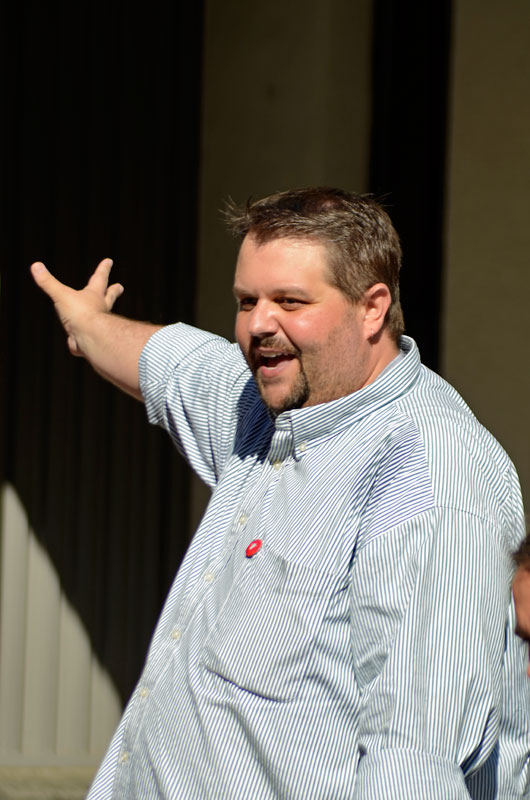 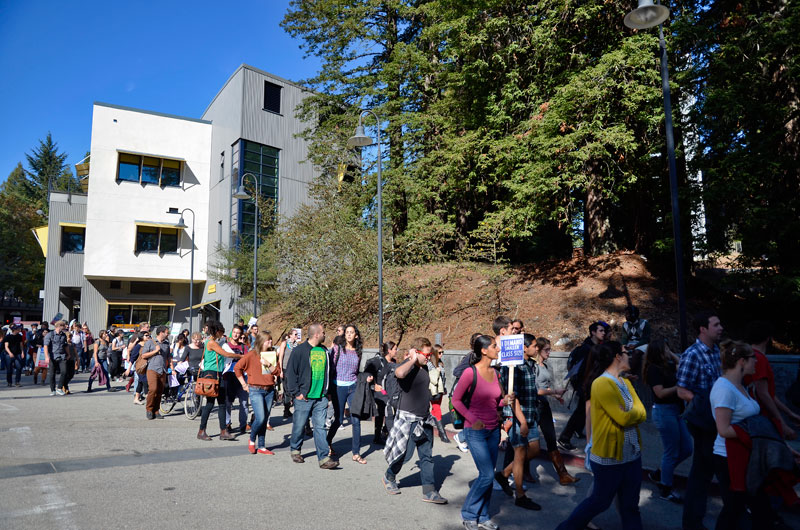 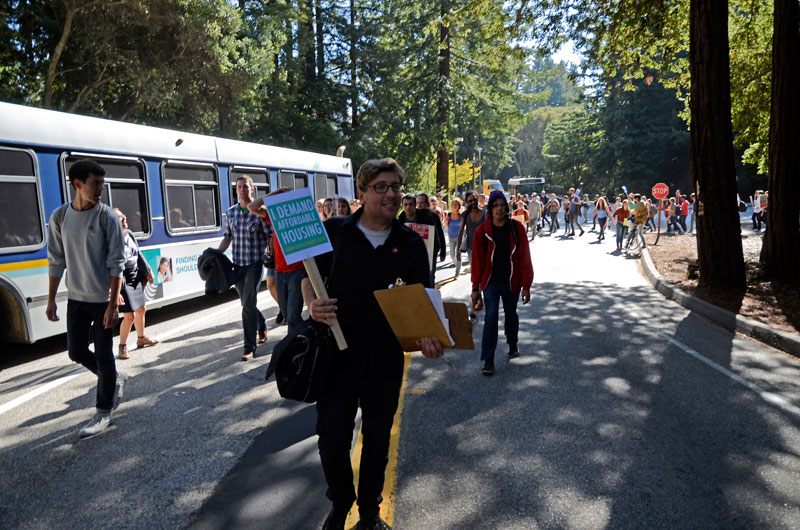 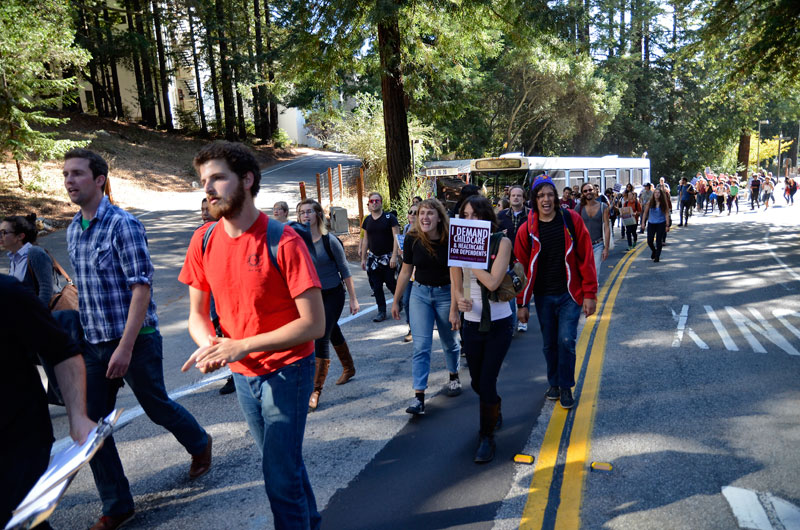 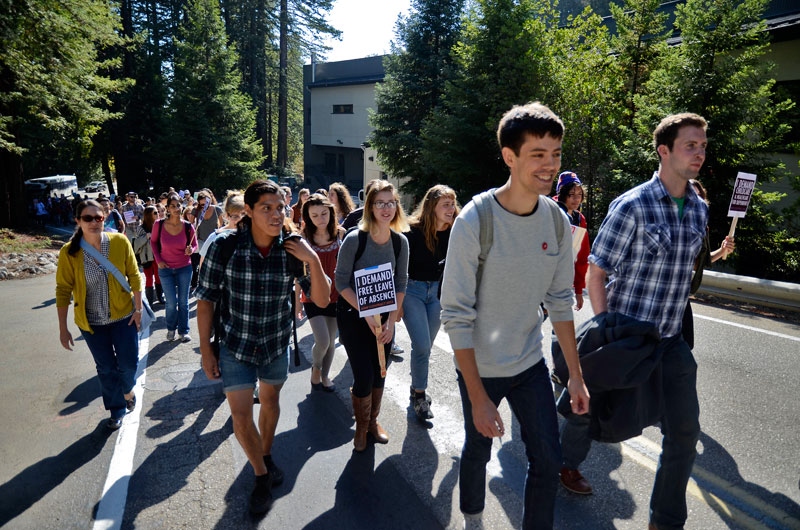 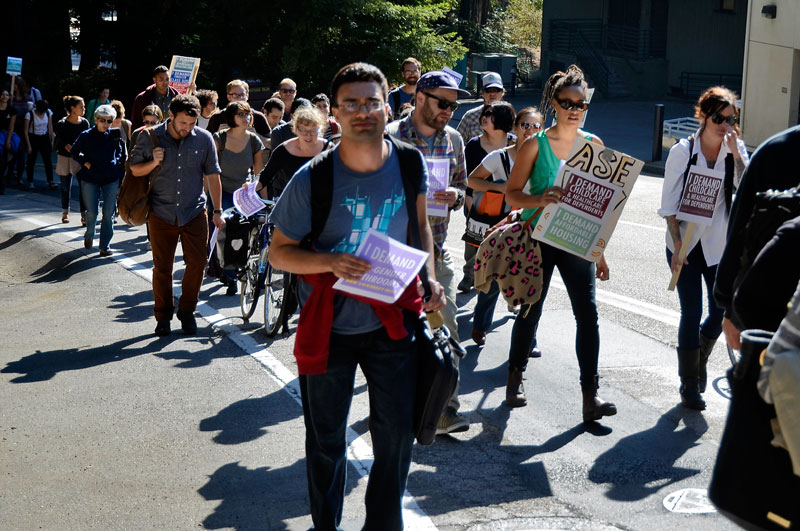 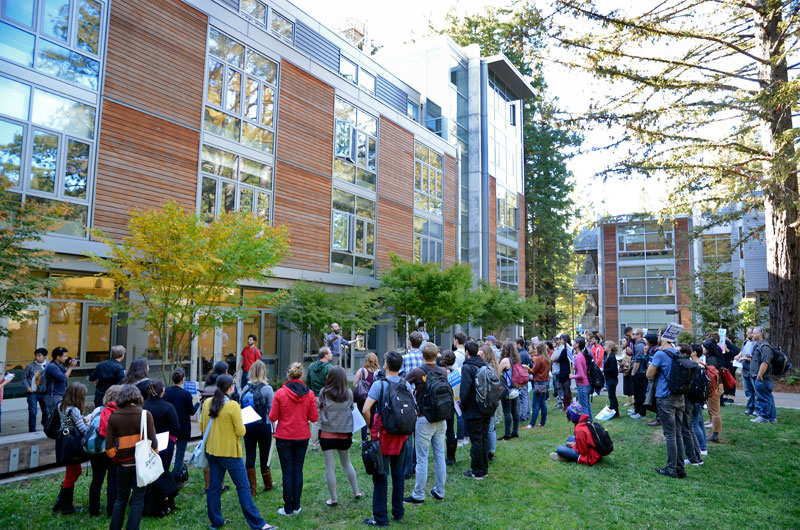 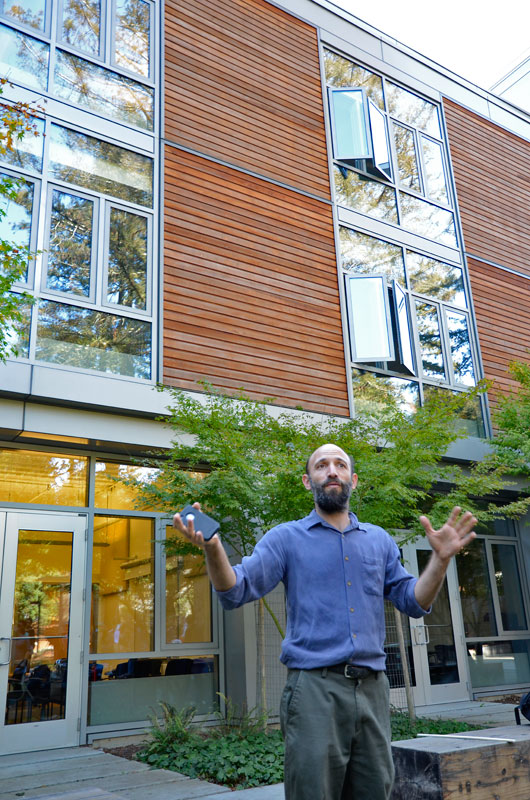 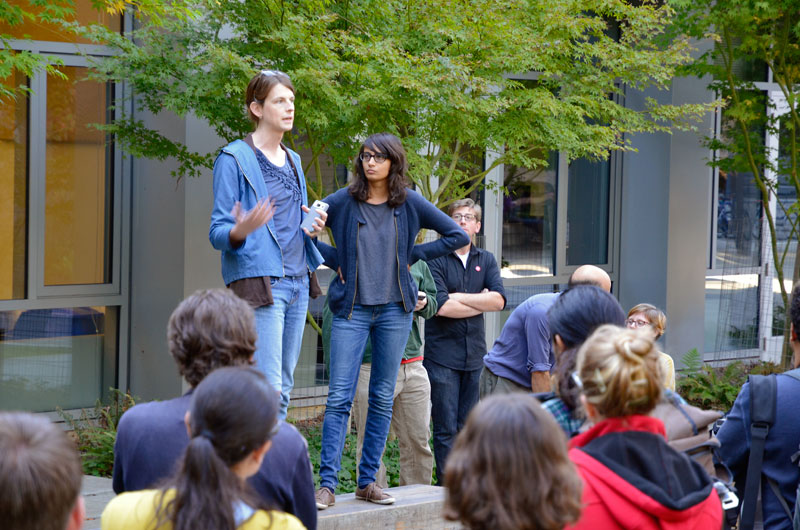 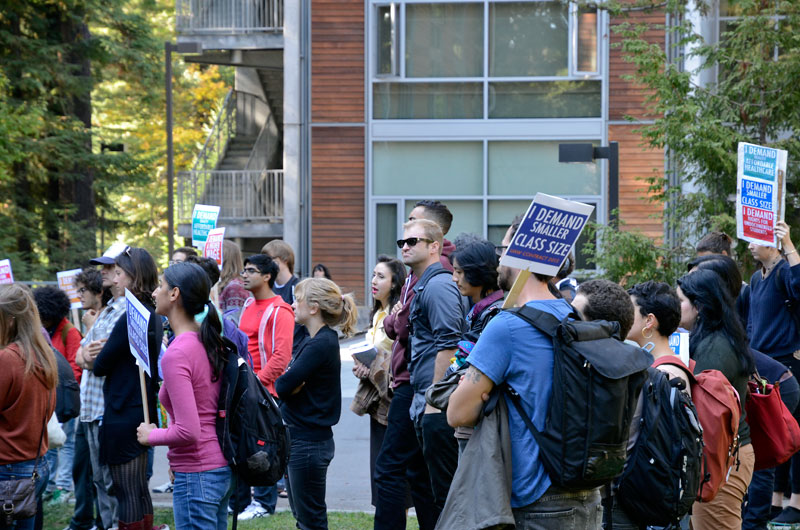 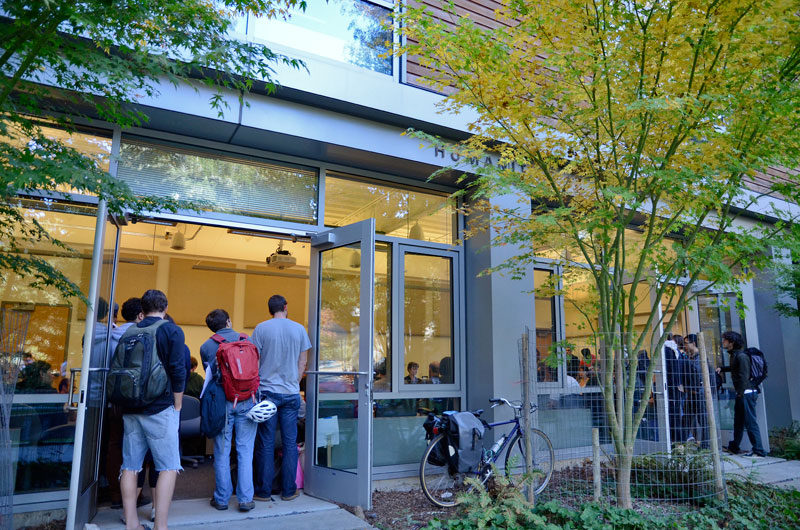 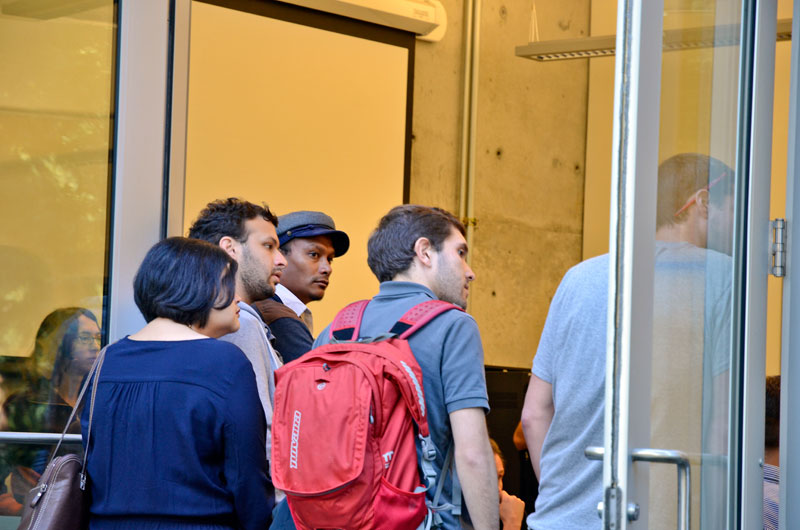 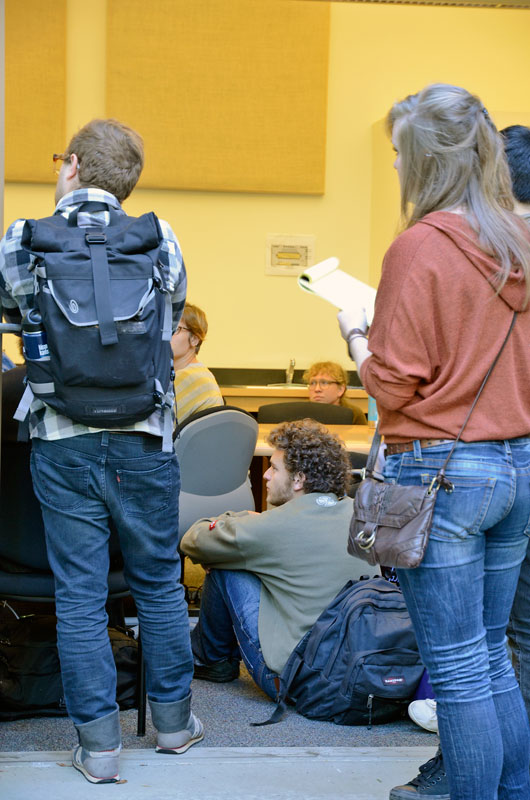 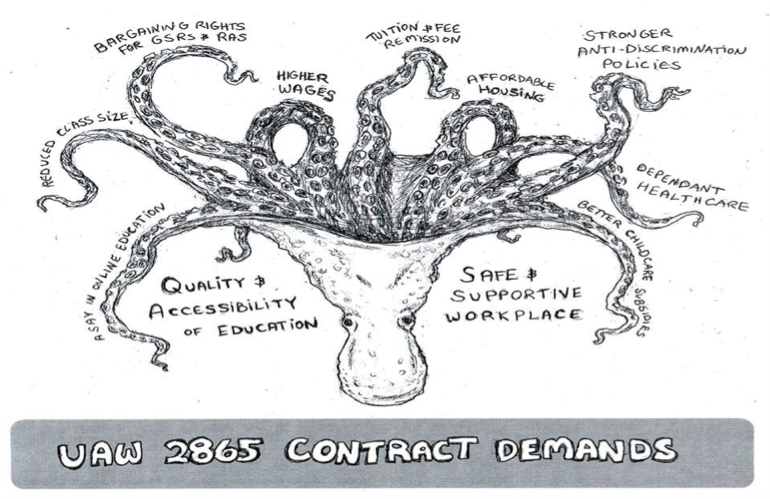