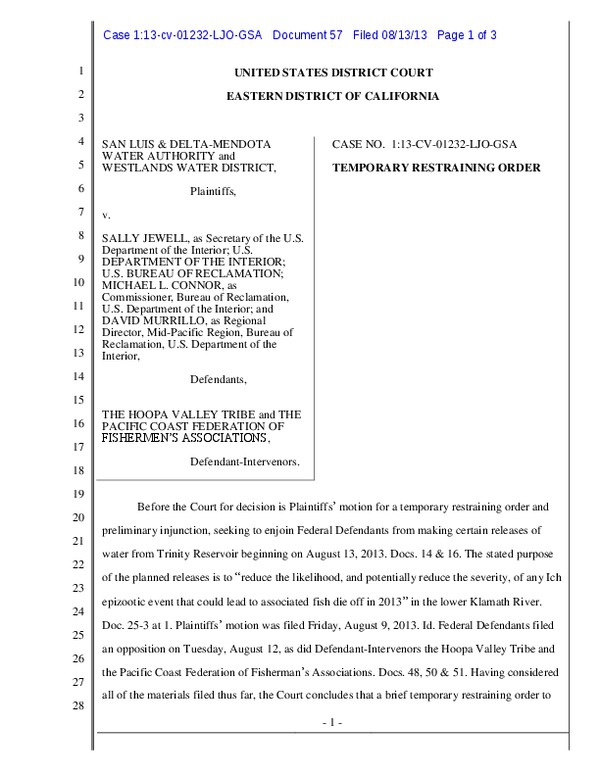 The Bureau of Reclamation began releasing the water from Trinity Reservoir on August 13 to avert a massive fish kill on the lower Klamath like the one that took place in September 2002, when over 78,000 fish perished due to an outbreak of disease in low, warm water conditions. After the judge issued the order, the Bureau reduced the flows from Lewiston Dam back to 450 cfs.

Reclamation planned to release a total of 62,000 acre feet of Trinity water, plus an additional 39,000 acre feet of emergency water if fish demonstrate signs of disease, to the Klamath through the end of September.

"Having considered all of the materials filed thus far, the Court concludes that a brief temporary restraining order to maintain the status quo is warranted," wrote U.S. District Judge Lawrence J. O'Neill. "This would afford an opportunity for the Court to consider a reply and perform a more measured analysis of the issues."

O'Neill stated, "On the one hand, Plaintiffs have established that these releases have the potential to reduce further already low water allocations to their members. Although there is dispute over whether such reductions can be reasonably anticipated to follow from the planned releases, if dry conditions persist into the next water year, they are likely to impact next year’s water allocations, with associated economic and environmental impacts."

"On the other hand, the releases are designed to prevent a potentially serious fish die off impacting salmon populations entering the Klamath River estuary, an event that could have severe impacts on both commercial and tribal fishing interests. However, nothing in the record indicates that delaying the additional flows by several days to permit a more measured analysis of the issues would render ineffective the overall flow augmentation efforts," the Judge concluded.

The Hoopa Valley Tribe and Pacific Coast Federation of Fishermen's Associations intervened in the case in support of the Bureau of Reclamation plan to increase flows starting August 13.

"We have what is just a very temporary TRO in effect just until this Friday to allow the Judge to consider the pleadings in more detail, and to allow responses to the existing pleadings," said Glen Spain, Northwest Regional Director of the Pacific Coast Federation of Fishermen's Associations (PCFFA). "This is to be expected given the very tight time constraints in a complex case."

"We are facing a very serious emergency situation in the Klamath Basin, but it is also true that the salmon runs are nowhere near their peak yet, which is expected to be early September," said Spain.

He emphasized, "However, those valuable salmon runs will not wait for anyone, and remain in serious jeopardy of a major fish kill disaster as long as that emergency pulse flow is delayed. Doing nothing is not an option that makes sense."

You can read the document: Opposition to Motion for Temporary Restraining Order at: http://earthjustice.org/sites/default/files/files/TrinityTROoppositionPCFFA8-13-13.pdf

A news release from PCFFA and Earthjustice, issued before the granting of the TRO, stated, "The U.S. Bureau of Reclamation water release plan would help prevent another disaster like the Klamath River Fish Kill of 2002. That year very low flows and high temperatures contributed to a massive die-off of adult Chinook salmon that is considered one of the single worst adult fish kills in U.S. history."

More than 78,000 adult spawners died in that disaster before they could lay their eggs, according to official estimates by the California Department of Fish & Wildlife.

The groups said this in turn led to "nearly coast-wide closures of ocean salmon fisheries in 2006, thousands of lost fishing jobs and a declared fisheries disaster by the U.S. Department of Commerce that resulted in estimated economic losses of up to $200 million."

Due to the current drought, another 2002-like fish kill is likely without emergency increased water releases from Trinity River dams. If another similar fish kill is allowed to happen, a major fisheries economic disaster four years later in 2017 could be the result, according to the groups.

“These emergency cold water releases will help salmon survive this drought,” said Spain. “Why should Central Valley corporate farmers get all the water they demand while coastal fishing-dependent communities get dead fish and dry rivers?”

Spain noted that nearly half of the total flows from the Trinity River are already diverted from northern California to the Central Valley for irrigation and hydropower needs. Westlands’ demand for even more water would take it from Trinity-Klamath River fish.

The salmon and steelhead in the Klamath Basin help provide a living for commercial fishermen, charter boat captains, sportfishing guides, Tribal members and coastal communities from Fort Bragg, California to southern Oregon, according to the groups. Another major Klamath-driven fishing closure like what occurred in 2006 could close ocean salmon fishing down from Monterey to well into central Washington, causing devastating economic damages.

“The fishing community – commercial, recreational and Tribal – has sacrificed a great deal to ensure there are ample returning spawning salmon, including total closures of our seasons and loss of our livelihoods in recent years," said Eureka commercial fisherman Dave Bitts, President of the PCFFA. "It has been painful, but we have done this as an investment in our future. All of this sacrifice will be for nothing if San Joaquin Valley agribusiness gets its way and steals the salmon’s water.”

Attorney Jan Hasselman of Earthjustice said, “Healthy salmon runs are the sustainable lifeblood of Northern California coastal communities. Salmon runs can provide jobs forever if managed correctly. But without enough water in the river for salmon and steelhead to survive, these resources will disappear.”

The Hoopa Valley Tribe, an intervener on behalf of the U.S. government in the lawsuit, said it will be issuing a full press release on the temporary restraining order pertaining to the Trinity River flows on Wednesday morning. Here is the initial statement from the Hoopa Valley Tribal Chairwoman:

"Today I have received a Temporary Restraining Order (TRO) issued by Judge Lawrence J. O' Neill that has an adverse effect on the scheduled release of Trinity River water to advert a Klamath fish kill," stated Hoopa Valley Tribal Chairman Danielle Vigil-Masten. "This TRO contradicts almost 60 years of laws pertaining to the diversion of the Trinity River, which put the Hoopa Valley Tribal water rights and the Trinity fishery over the needs of Central Valley irrigators. It is unfathomable that the Central Valley water users would file this suit after they have made millions of dollars off the backs of the Trinity River salmon and communities."

In a press release on Wednesday, August 7, the Hoopa Valley Tribe warned that the Bureau of Reclamation (BOR) plan to supplement Klamath River flows to avoid a fish kill may not be sufficient. “We need more water and we need it sooner,” said Hoopa Fisheries Director Michael Orcutt.

"The salmon need waters that were always theirs, water for them that Creator put there from the very beginning for them.....that water was never intended for corporate farms growing watermelons and cotton in contaminated arid lands in the deserts of Southern California," said Sisk. "Salmon FEED the World and clean the WATERS!"

"This is Deja Vu all over," said Tom Stokely of the California Water Impact Network (C-WIN). "In 2002, Westlands, SLDMWA, Sacramento Municipal Utilities District, Northern California Power Authority and San Benito County Water Agency obtained a preliminary Injunction prohibiting additional Trinity River releases. Additional Trinity flows into the Lower Klamath River could have prevented or at least abated the fish kill. It looks like Westlands and SLDMA are trying for a repeat performance!"

C-WIN supports the higher flows and opposes the lawsuit. You can view C-WIN's comments on the Draft Environmental Assessment at: http://www.c-win.org/webfm_send/337.

The TRO was issued as the Brown administration is fast-tracking the construction of the peripheral tunnels to export northern California water to Westlands Water District, other corporate agribusiness interests and oil companies. The construction of the 35-mile-long tunnels would hasten the extinction of Sacramento River chinook salmon, Central Valley steelhead, Delta and longfin smelt and other fish species, as well as imperil salmon and steelhead populations on the Trinity River, the only out-of-basin water supply for the Central Valley Project.

Other documents filed with the court:

For recent news and more background on this story visit:
http://www.c-win.org/content/westlands-sues-halt-higher-trinity-flows-prevent-repeat-2002-lower-klamath-fish-kill.html
Add Your Comments
Support Independent Media
We are 100% volunteer and depend on your participation to sustain our efforts!