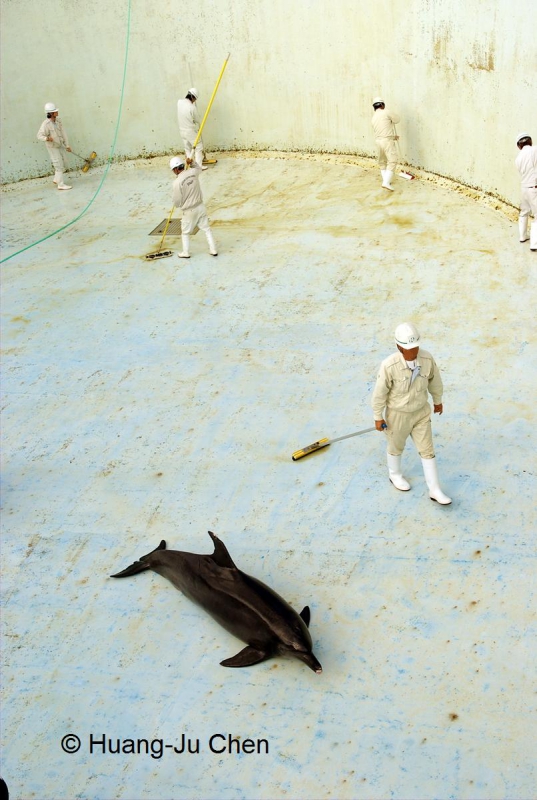 original image (806x1200)
This is one of the precious proof proving the ability of man not to keep a dolphins and whales.
On the reverse side of the gay dolphin show, the dolphin which cannot appeal against the present condition has suffered abuse.
There are no animal welfare lows in japan for dolphins and whales in captivity.
A family is killed cruelly and they are caught.
They are caught for a dolphin show and the dolphins which were not selected were killed.
This unjust repetition is continued for many years for many years. so sad!
I presented this photograph and asked other cleaning methods to WAZA
My question was disregarded. All the organizations also ignored my question.
This goes on in USA, in Europe, and everywhere else dolphins are held in tanks."
Other cleaning methods do not exist.
dolphins are lying on the bare floor of an aquarium tank in Japan while workers clean grime and goop off the walls.
* A certain prominent specialist says that the same cleaning method goes on at all of the 51 dolphin abusement parks in Japan.
Many whales and dolphin specialists have appealed against this cruelty.

The petitions were launched by three communities and I hope you can sign.

http://www.thepetitionsite.com/787/319/711/to-stop-dolphins-and-whalescaptivity-in-japan-no-more-captives/
*Now, "An nuknown error has occurred" from care2 displays. I cannot do upload of a photograph, and edit of a text in all my petitions.

We have to terminate this history of blood.

Please sign the petititon to stop dolphins and whales captivity in japan,and set them free.
Please share this with your family and friends.
Please make this spread. 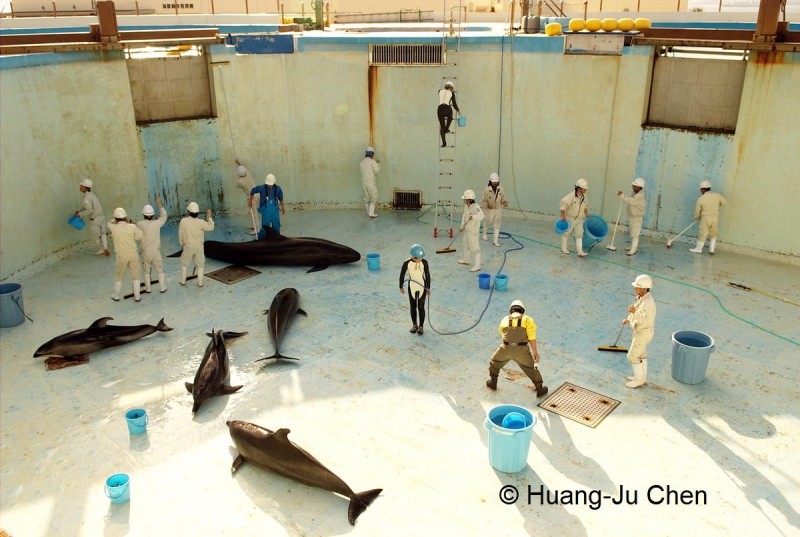 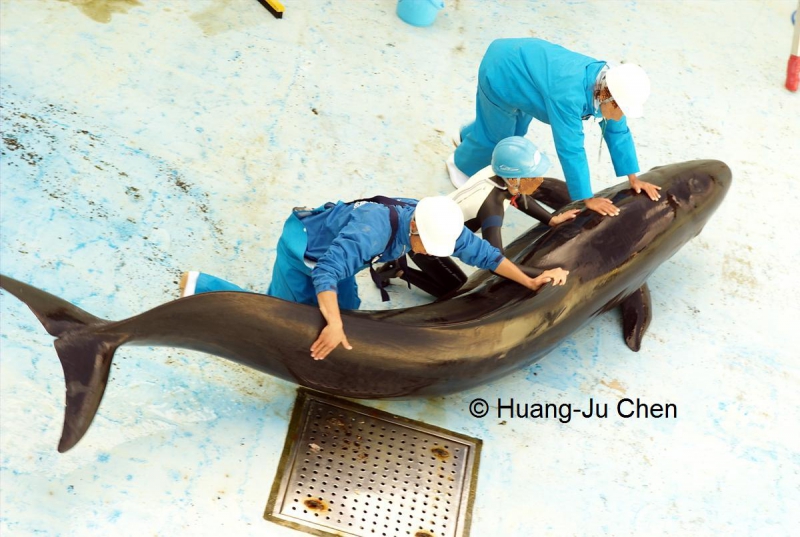 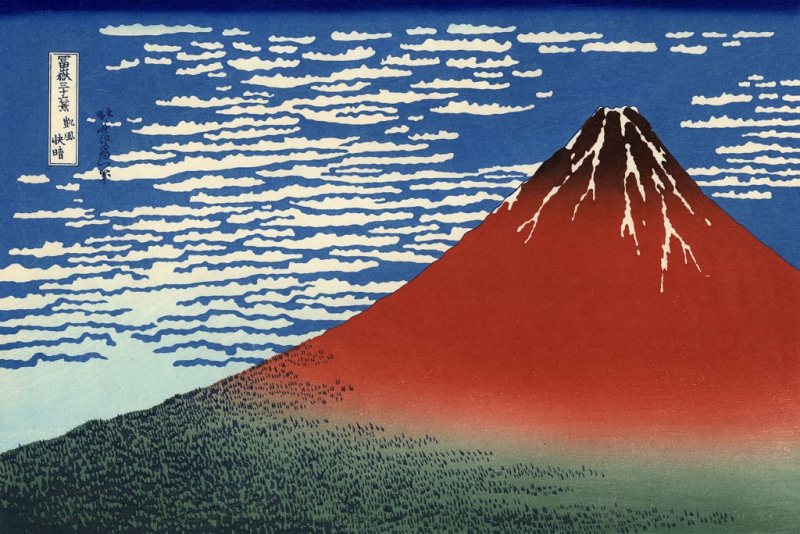 original image (1024x684)
This is negotiation between the world and japanese Governors.
I will not visit "World Heritage in japan" as long as each Prefecture continues slaughter and captures of dolphins , small whales. as a tourist.

The place in many worlds expects registration to world heritage aimed at obtaining the tourist. Of course World Heritage is an international sightseeing spot. so every places want to be.

One after another, world heritage authorization is given to the prefecture with the homeport of coastal whaling and a big whaler.

The power of a whaling lobby group is mighty? They have a perfect fund based on tax? this is so weird, is't it ? The beginning of 2013, It is too famous that "tsunami revival money" was used for whaling industry.

The animal protection law of our country is not adapted for the coastal sea mammals. It is a very sly skillful law.

Each Prefectures never stops slaughter and captures of dolphins and small whales for the reason of important "resources"
They express a dolphin as "marine resources" frequently.

"India bans captive dolphin shows, says they should be considered ‘non-human’ people"
What difference it is!


The tourists from the world must be important "resources" for each prefectures.
Which do they want to choose for the future?
Continuation of [dolphins and small whales ]capture and slaughter ? or The tourist from the world?
This is negotiation between the world and Prefectures.
The petitions of "the world heritage boycott" were launched by three communities and I hope you can sign.

care2 *Although I started the care2 petition , edit is impossible because of some technical troubles. I cannot do upload of a photograph, and edit of a text in all my petitions. Even "signature goal" cannot be edited.

*The Minister of Agriculture, Forestry and Fisheries holds up a broken theory, and is continuing fake" research whaling" by the Antarctic Ocean.
http://en.mercopress.com/2013/02/27/fisheries-minister-says-japan-will-never-stop-hunting-whales-it-s-part-of-our-culture
This his important testimony should be deliberated by the International Court of Justice. Because, he has denied the title of "research whaling "himself. The Japanese government wants to make it thought "Japanese people need ingestion of whale meat" for overseas, and is desperate.
*In Japan, the balance of "the demand and supply" of whale meat has collapsed long ago.
They have 5000 t. ~ 6000 t. of frozen stockpile meat.
This slaughter is continued why? And whaling by the Antarctic Ocean of a Self-Defense-Forces guard.
* Japan's Institute for Cetacean Research (ICR) controls major media, and many of Japanese of "whether the world is angry about what" are still ignorant about a whale issue.
*The Japanese government bought the vote of IWC with ODA money, and filled this slaughter even with Government Recovery Funds Stokes.
*Icelandic the endangered fin whale whale hunt were resumed. For the reason exported to Japan .
(Many Japanese do not know that fin is endangered species. It does not know that Iceland resumed whaling for Japan, either. Furthermore, a dog snack is not known, either.)


Don't let the Japanese government run into loophole. If the international law about a whale slaughter and a whale meat trade does not exist, in order to judge Japan, we should enact new international law.

Whaling is top priority.
The logic of the global standard is refused and all the fake logic was attached later.

A wise man says .
"whales are migratory across the entire ocean . "

*This unnecessary whale, dolphin In order to make slaughter stopped, the anti-whaling country in the world, npo, ngo, overseas media and Journalist, specialist, and and individual in the world are doing their best.
I thank to them from the bottom of my heart. love you.
The Japanese government ignores the big contrary from the world and they are moving in order to nationalize the whaling industry.
The world must not accept Industry only "the slaughter act and factory process" to other species.
Just now, Australia and New Zealand are fighting with Japan in the International Court of Justice for the whale.
Justice should be absolute and there should be so.

The 21st century.
The continuation of whaling of Japan is one of issue of the worldwide scale which should be most apprehended against other species.

An economically advanced country is not necessarily a moral advanced nation.

Many specialists are inquiring about the dolphin.
I am not in a speciality.
Please investigate details.

Please take action. Please share this with your friends.
Please make this spread.