Add an Event
Newswire
Calendar
Features
Home
Donate
From the Open-Publishing Calendar
From the Open-Publishing Newswire
Indybay Feature
Publish to Newswire
Add an Event
Related Categories: California | Education & Student Activism
On the Recent Nomination of Janet Napolitano for UC President
by UAW 2865 – UC Student-Workers Union
Tuesday Jul 16th, 2013 2:55 AM
A statement from UAW 2865 – UC Student-Workers Union regarding the recent appointment of ex-Homeland Security Secretary Janet Napolitano as the President of the UC. 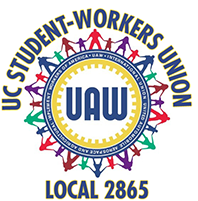 On the Recent Nomination of Janet Napolitano for UC President - July 15, 2013

A statement from UAW 2865 – UC Student-Workers Union regarding the recent appointment of ex-Homeland Security Secretary Janet Napolitano as the President of the UC:

As student-workers of the University of California (UC), we are shocked and troubled by the nomination of Janet Napolitano for appointment as the President of the UC. Napolitano is clearly unqualified for this position. Moreover, the UC Regents’ selection process shut out public involvement and democratic oversight over this consequential hiring decision. We fear that this decision will further expand the privatization, mismanagement, and militarized repression of free speech that characterized Mark Yudof’s presidency and will threaten the quality and accessibility of education, which must be the first priority for the future of the UC system.

Although Napolitano has political and managerial experience, she does not have the academic qualifications, scholarly expertise, or other experience in education that would be appropriate for heading an institution of higher learning. Napolitano’s experience at the Department of Homeland Security (DHS) qualifies her to manage a security, law enforcement, or disaster management agency, but not the world’s premier public university system. The Regents’ equation of this experience with experience appropriate for university governance reflects disturbing priorities for the future of the UC. Furthermore, what record Napolitano does have of safeguarding public education is appalling: during her time as governor, Arizona ranked among the bottom five states in per-pupil spending.

While Napolitano has publicly claimed to support the DREAM Act, under her leadership, the DHS deported a record 1.5 million undocumented immigrants. This number is expected to grow to 2 million by the end of the year, as The New York Times reports. The UC administration has historically supported undocumented student rights. Let’s make sure that following Napolitano’s nomination, the UC administration demonstrates ongoing support for the fate of the undocumented community.

We question the implications for academic freedom that arise from installing a law enforcement official with a background in surveillance, cyber-security, and border control in a central leadership role at an institution of free expression and learning. After the events of police violence and repression of free speech across UC campuses in recent years, the hiring of such an official as UC President promises to strain the already-tense relationship between students, workers, and the administration.

This hiring decision, made in an extremely clandestine fashion, signals the UC Regents’ narrow and dystopic vision of what the UC community needs—a vision that would have been widely contested if the selection process had been conducted transparently and democratically. We envision a UC system that operates in full view of the public and with the active bottom-up participation of all those who run the education system, rather than through secretive top-down political and business deals forced onto the UC community after the fact. Napolitano’s announcement of her resignation from DHS even before the Regents’ vote on her hire points to the Regents’ lack of respect for even the most basic democratic mechanisms in this hiring process.

As the front-line educators, researchers, and students of the UC system, we have experienced the degradation of educational quality and accessibility at the UC directly in our daily lives. Based on this experience, we call for an end to current trends in UC governance in which the UC Regents and executive management prioritize their own financial and political interests over the needs of the university community through top-down decisions. We call for a president devoted to rebuilding our capacity for teaching, research, and learning—not a specialist in cyber surveillance, law enforcement, and border security. We demand that the UC Regents retract Napolitano’s nomination for appointment and reopen the process for selecting the UC president. We believe that the UC Regents must actively work to involve the entire UC community in an open, public, and democratic process for choosing a candidate with the appropriate background and experience to lead the UC system.


http://www.uaw2865.org/?p=3365
Add Your Comments
LATEST COMMENTS ABOUT THIS ARTICLE
Listed below are the latest comments about this post.
These comments are submitted anonymously by website visitors.