Add an Event
Newswire
Calendar
Features
Home
Donate
From the Open-Publishing Calendar
From the Open-Publishing Newswire
Indybay Feature
Publish to Newswire
Add an Event
Related Categories: International | Global Justice & Anti-Capitalism | Government & Elections
SA People/Labor To Protest War Criminal Barak Obama Take your “Africom”, we don’t want it!
by repost
Wednesday Jun 19th, 2013 8:31 AM
Protests will greet the US war criminal Barak Obama when he visits South Africa. COSATU and many other organizations are joining the demonstration against the criminal policies of Obama and the US government. 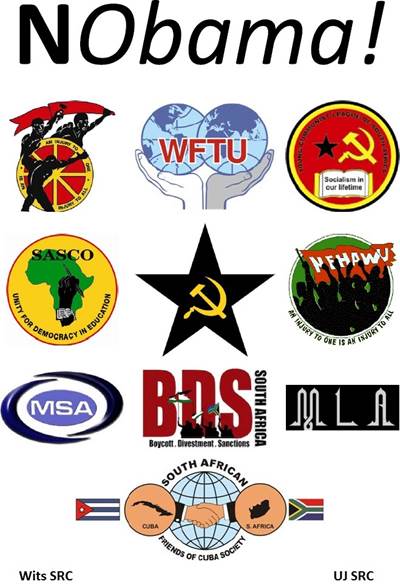 Our rejection is based the USA's arrogant, selfish and oppressive foreign policies, treatment of workers and international trade relations that are rooted in war mongering, neo-liberal super-exploitation, colonial racism and the disregard and destruction of the environment, thus making the realisation of a just and peaceful world impossible.

The coming of President Barak Obama to South Africa is the first ever since he was elected head of state. The USA under his leadership has escalated its assault on human rights, militarisation of international relations and continuing galloping of world resources at the absolute expense of the environment and oppressed peoples of the world.

The criminal occupation of Palestine by the Apartheid State of Israel, as a well-known fact in our country, has only been made possible by the USA’s financial and political support for the Racist Israeli regime. This is expressed in the main, through both its open support and military donations that come to billions of dollars every year – with USA aid to Israel being more than that of Africa, Latin America and Asia combined.

In addition, the USA has for years been single-handedly blocking any progress and is totally divorced and isolated from the consensus of the international community. In fact, the USA is the most frequent user of the UN veto: it has used its veto power over 40 times to defend Apartheid Israel. As South Africans, we painfully recall how the US used its veto power to defend Apartheid South Africa, particularly from UN resolutions imposing economic and military sanctions. The USA, under Regan and others, supported Apartheid South Africa and was on the wrong side of history. Why does the USA not learn from its history, and be on the right side of history this time?

Finally, the United States' policies on the environment, specifically the fact that it is one of the largest contributors to global warming, yet to this day continues to refuse the observing and singing of the Kyoto protocol, is simply unacceptable.

Progressive forces in South Africa have consistently been raising these issues and many others regarding the role of the USA in the global community. We categorically make it known, that the visit of the USA President to South Africa is an unwelcome visit that will be protested, picketed and resisted by all justice and peace-loving peoples of this country. Friendship with South Africa must be based on values of justice, freedom and equality and these the USA has offended, undermined and ridiculed through its actions in the global front.

The following issues will be highlighted in upcoming protests of President Barack Obama:

1.
The championing and maintenance, by the USA, in the militarisation of international relations and co-operation. It is a well-known fact that the USA approaches conflicts in the world through inciting, encouraging as well and championing war, primarily driven by its business interests often masqueraded in the language of defence of human rights. The militarisation of international relations is in the main exemplified by institutions like Africom, NATO, and the continuing double standards around nuclear disarmament that the USA preaches when it comes to countries in the South, whilst continuing to collaborate with on nuclear weapons with Israel.

2.
The continued greed in the guzzling of world resources by the USA epitomised by its encouragement and support of its multinational companies that have no regard for the environment, human rights, progressive labour laws etc.

3.
The USA’s active support and defence of colonial and oppressive regimes. This is the one aspect of USA foreign policy that most exposes its hypocritical character where regimes that support its interest are never opposed; instead they are not only supported but maintained through amongst other things, the USA war machinery. Chief amongst these is Israel, which continues to serve as the USA’s frontline state in the Middle-East whilst suppressing and maintaining its racist apartheid policies on Palestinian people. Another example is the USA’s support to Morocco, that is oppressing and colonially occupying Western Sahara, and increasingly the support of oppressive regimes like the one in Colombia.

4.
The USA’s role maintaining the underdevelopment of the African continent and its imperialistic trade relations with African countries.

5.
The unjustifiable blockade on Cuba, and the unfair imprisonment of the Cuban 5.

6.
The United States of America is the single largest contributor to global warming which is condemning the world into catastrophic environmental disasters.

Members of the public are invited to participate in a National Day of Action on the 28th of June, with a primary event taking place in the form of a protest march from Union Building to the United States of America Embassy in Pretoria:

A demonstration against the decision of the University of Johannesburg to award President Barack Obama an honorary doctorate:

Immediate release of the Cuban 5!
Cease US/NATO warmongering in Syria and everywhere else!
Take your “Africom”, we don’t want it!
Immediate closure of “GITMO”!
Stop snooping on our e-mails, phone calls and social networking!
Halt the unleashing of your Al Qaeda forces on the World’s people!
Free Bradley Manning!