Add an Event
Newswire
Calendar
Features
Home
Donate
From the Open-Publishing Calendar
From the Open-Publishing Newswire
Indybay Feature
Publish to Newswire
Add an Event
Related Categories: International | Global Justice & Anti-Capitalism | Labor & Workers
Slaughter of Proletarians in Bangladesh: Capitalism is the Assassin!
by PCInt
Sunday May 26th, 2013 2:42 AM
On April 24 "Rana Plaza" a 9-storey building in an industrial suburb of Dhaka, capital of Bangladesh (14 million), collapsed on about 3,500 workers (their number is not known precisely) working there. The building contained five textile factories, as well as a bank and many shops. The official present death toll is 1128, the number of injured is unknown. Most of the victims are women, who constitute 80 to 90% of the workforce in the Bangladeshi textile industry. 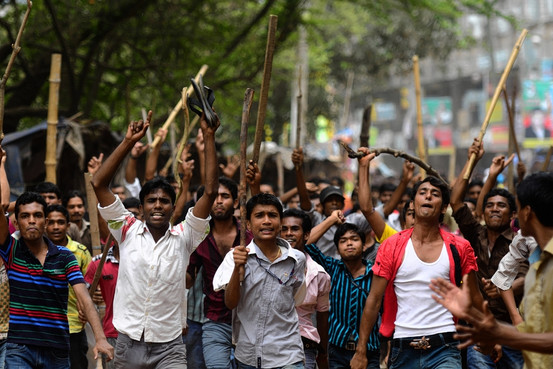 The outrage of the workers, who immediately demonstrated for the arrest and execution of those responsible for the carnage is particularly great given that on the eve of its collapse, the building was evacuated due to fissures developing in the structure; but on the following day, the bosses forced their employees to return to work, assuring them that there was no risk: the risk to their profits was more important to them than the risk of workers' lives!

The owner of the building, Mohamed Sohel Rana, is a wealthy businessman linked to the ruling party, the Awami League. Given the magnitude of the disaster, and especially the workers' fury, he was arrested and charged with having constructed his building "illegally" without permits; he defended himself by saying that hundreds of industrial buildings are in the same situation, obtaining a building permit taking "too long" – when the textile industry is booming; and secondly that it was not he, but the owners of companies that lease the building who had forced a return to work. The architectural firm that planned the building said it was not designed to house industrial facilities and that three floors were later added by the owner. Adding floors is, evidently, a common way to save on construction costs, in addition to other economies made in the construction...

The media are now reporting that Rana was known to have had links with the underworld, but in reality this massacre demonstrates once again that the mob in power, the bourgeoisie, is far more dangerous than those who hold sway in the shadows, and that the entire capitalist system is criminal.


A paradise for the capitalists, hell on earth for the workers


Bangladesh is a country of over 150 million people, still largely agricultural (over 70% of the population lives in the countryside), but which has for thirty years experienced a massive rural exodus and accelerated industrialization; w hile officially declared unemployment is low, it is generally believed that underemployment affects 40% of the workforce, which generates a significant migration towards mainly the Middle East and Southeast Asia, but also to Europe: on 18 April in Greece armed foremen(!) fired on a hundred Bangladeshi immigrants who had gathered to demand payment of their wages, causing thirty casualties! Child labor is widespread, including in textiles.

In recent years Bangladesh has become the second largest exporter of clothing after China; textile exports represent 80% of total exports, and the industry employs 3 to 4 million people in about 5,000 factories. The textile industry works directly for major international brands or serves as subcontractor to other manufacturers, including the Chinese! The success of the Bangladeshi textile industry in international competition is based on the super-exploitation of its workforce. The minimum wage there is only 38 dollars , while it amounts to $138 in China, $65 in India, $67 in Vietnam, $75 in Cambodia (1), other Asian countries with an important textile industry.

We have seen that the textile workers are overwhelmingly female; they are also young, and
driven from the countryside by poverty and hunger. As a general rule they are paid 30% less than men. The legal working time is 8 hours per day, but when there are large orders, it can go up to more than 10 hours, 7 days out of 7! Of couse there are regulations on the health and safety of workers, but as with social legislation, they are hardly ever respected: there are only a few dozen labor inspectors for the entire country, and each time an inspection is ordered, the factory owner is notified in advance! Also, "Export Processing Zones" are exempt from the application of social legislation, as is also the case for economic activity that takes place in the so-called "informal" sector which constitute 80% of the Bangladeshi economy.

A strict anti-worker policy rules in the country; a union can be formed only after the agreement of the employer and a strike is legal only after a long process of "conciliation" with the capitalists, then a secret ballot of at least 75% of the workers in favor. The authorities have the right to prohibit strikes and arrest strikers without trial in cases of threats "the national interest". Strikes are banned outright in transport, banks, businesses owned by foreigners etc..

Repression against workers, including against those who seek only the limited
rights granted by law, is widespread: layoffs, arrests, assassinations. The law provides for sentences of forced labor for strikes or "indiscipline at work", etc. Even when "legal" strikes occur, the bosses do not hesitate to resort to lockouts and layoffs: this is what happened in 2011 in Dhaka in three textile mills where a strike was called demanding the payment of wages: 6600 workers were laid off there (2).

The result of these poor conditions is the high number of fatal "accidents" – accidents which are actually murders, as they are the inevitable result of savings made by employers at the expense of anything that might make the job a little less dangerous; the protection of workers represents an intolerable burden on the "production costs" of the capitalists: to produce at low cost, it kills!

In the same industrial district of Dhaka, fire claimed the lives of more than one hundred and ten people last November: the owners had locked the exits to force the workers to continue work. The collapse of hastily constructed buildings crammed with machinery had previously killed 35 people in June 2010, 18 in February 2006, 75 in April 2005, etc., all in the city of Dhaka. Statistically, a textile worker is killed every 10 days...

In the face of the scandal of repeated accidents, various humanitarian organizations and international collaborationist unions have been working for years trying to gently convince major western distributors to encourage their suppliers and the Bangladesh government to follow a few basic social and safety rules for workers. They have just loudly proclaimed victory because many of these large companies (El Corte Inglés, Benetton, Lidl, Marks & Spencer, H & M, Carrefour, Loblaws etc..) on 15 May under the auspices of the ILO, signed an agreement on a program of social reforms and safety inspections among their suppliers (3).

To know what to really expect, we should be aware that such agreements have passed regularly since the 90s of last century, but have not translated into any improvement of the situation of the proletariat. For instance 2 companies that were in the building Rana Plaza had even recently passed an audit of safety in the workplace (4)! "Experts" quoted by a major newspaper explained that we should not expect dramatic changes in the textile industry in Bangladesh or elsewhere because of “corruption, desperation, vested interests and Western consumers who favor better working conditions but balk at paying more for their T-shirts " (5).
So "Western consumers" – that is to say the Western proletariat – bear a share of responsibility for the savage conditions of life in Bangladesh and elsewhere which the capitalists inflict on their proletarians! But is it is the Western proletarians who decided that they needed relocate to countries with lower wages, or the Western capitalists?

In fact the bourgeois not only want to hide their full responsibility for the crimes of their regime;
they also seek to place the proletarians of the different countries in opposition. And as long as they remain passive, the workers are condemned to play the bourgeois game.

The solution is to fight.

Despite their difficult circumstances, despite the pervasive repression, despite the "industrial police" put in place to control them, the workers in Bangladesh show their class brothers and sisters in the West it is possible to fight and succeed, although these successes are inevitably partial and always remain in question under capitalism.

Since the announcement of the slaughter, tens of thousands of workers in Dhaka have stopped work, blocked roads, demonstrated for the punishment of offenders and also to improve their own conditions. The textile bosses retaliated with a lockout while the authorities called in the police.

But to quell workers' anger, the government was forced to announce an increase in the minimum wage and recognition of the right of workers to organize unions. Of course, these are only promises and we will see what the reality is, but the Bangladeshi proletarians who have already demonstrated their combativity in the recent past, will not be easily fooled.

In the spring of 2006 tens of thousands of workers from nearly 4000 textile mills went into battle. Three workers were killed by the police, hundreds injured and imprisoned. In 2007 the Emergency Law was declared to secure the capitalist order. In spring 2012 thousands of textile workers went into struggle anew in Dhaka for higher wages and to protest against repression – fifty workers were arrested and there were a thousand injured. On July 16, the the bosses armed thugs opened fire against a demonstration by workers demanding wage increases, causing 3 deaths and 35 injuries. In the same period, at a social conflict in a textile company, Aminul Islam, the head of an even more moderate union, was kidnapped and tortured to death by the security services.
Despite the repression, the Bangladeshi proletarians have had some success: in 2006 they obtained a 18% increase in the minimum wage, but high inflation quickly quashed the increase, causing a renewal of the struggle.

No doubt they will not settle for vague promises today. But no doubt also against the savagery of their exploitation, their struggle will be difficult. It is a struggle that will inevitably lead against the capitalist system as a whole and not just against some bosses more rapacious than others, a struggle that will set as its ultimate goal the destruction of capitalism, not its improvement or humanization as the NGOs, the pope and charitable organizations would wish.

What the workers from Bangladesh need, is not compassionate "consumers" in the West, but the entry into struggle at their side of the proletarians of the major capitalist countries against this criminal system of which, they, too, are the victims.
Exploitation is probably less brutal here, but is nevertheless very real, working conditions are not as terrifying as there, but here too the lives of workers is less important than the pursuit of profit; 6300 people un the world die every day from work accidents and occupational diseases, including in the most "developed" (6) capitalist countries. At about the same time as the slaughter of Rana Plaza, an explosion at a fertilizer plant caused 14 deaths in the United States. In the largest capitalist country in the world, 4500 workers die each year in "accidents" and 50,000 as a result of occupational diseases. These terrible figures reflect the true social war waged in all the capitalist countries against the proletariat.

If they want to end this endless war against them, the proletarians of the world have no choice but to engage in the class war against capitalism, putting into practice the old and still current slogan:

Workers of all countries, unite!

(4) The Wall Street Journal, 25/04/2013. The Brussels association responsible for the inspection was founded a decade ago by European companies such as Adidas, Hugo Boss, etc.. 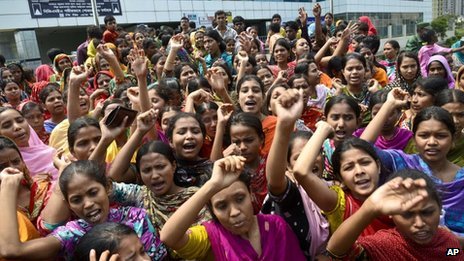 http://www.pcint.org
Add Your Comments
Support Independent Media
We are 100% volunteer and depend on your participation to sustain our efforts!