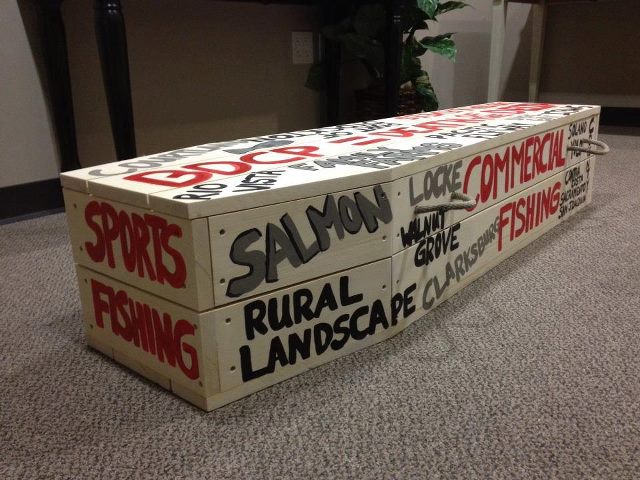 Coffin will be delivered to Jerry Meral, tunnel point man

I have a long and personal relationship with the Sacramento-San Joaquin River Delta, the largest estuary on the West Coast of the Americas.

I was first introduced to the Delta by my late father, Alfred, who first took me fishing in Miner Slough for catfish and striped bass when I was 10 years old in 1964. As a civil engineer for Cal Trans, he wanted to check up on some bridges in the Delta that he had designed. I caught three catfish, while he landed one striped bass in our first 30 minutes of fishing.

The Delta was a magical world that I hadn't known before existed. I was amazed by the winding sloughs, the wide variety of crops ranging from pears, to grapes to broccoli and the impeccable fishery. The striped bass fishery at that time was at its historical height, with the DFG estimating a population of around 3 million fish.

Since then I have fished many hundreds of hours on the Delta for stripers, catfish, black bass, crappie and sturgeon, having many memorable days while fishing from boat and bank on the estuary. The epic striper population of the mid-sixties is long gone, due to water exports to corporate agribusiness and southern California, although there was a rebound of stripers from 1995 to 2002, when the fishery reached over an estimated 1.5 million. At the same time, the same water exports that hammered the striped bass also resulted in precipitous declines of Chinook salmon, steelhead, Delta smelt, Sacramento splittail, green sturgeon and other fish speices.

Meanwhile, I became involved in the battle to save the fishery with United Anglers of California for over 20 years. I worked closely with Hal Bonslett, the late publisher of the Fish Sniffer magazine, on the board of that organization. When a brave group of state and federal fishery scientists revealed in 2005 that pelagic fish species - Delta smelt, longfin smelt, threadfin shad and striped bass - had declined to record low population levels - fishermen and environmentalists began organizing a campaign to stop the campaign.

Gary Adams of the California Striped Bass Association, West Delta Chapter, and I began a series of conversations about the need to form a coalition that would unite all of the people, including recreational anglers, commercial fishermen, family farmers, grassroots environmentalists, Indian Tribes and Delta residents, seeking to restore the Delta under one banner. Other folks began to agree with us. As a result, a group of people from diverse backgrounds ended up meeting in an office in Stockton in 2006 to form the group "Restore the Delta."

Since then Restore the Delta has done a lot of great work, including producing a documentary movie, Over Troubled Waters, filling up legislative hearings with opponents of the peripheral tunnels, staging protests and rallies at the State Capitol and coordinating an intensive media campaign against the tunnels.

However, as one who has had a long history as a creative cultural activist and writer, one thing I have seen missing in the campaign against the tunnels by Restore the Delta and other organizations is the use of creative, fun events that other activists have employed successfully in the environmental, anti-globalization and indigenous rights movements.

Today I'm very happy to say that Restore the Delta and other opponents of Gov. Jerry Brown's rush to build peripheral tunnels that would drain the Delta and doom salmon and other Pacific fisheries will do something different and present California Natural Resources Agency Deputy Director Jerry Meral, the Administration's point man for the project, with a coffin on Thursday at a public meeting on the tunnels plan.

Opponents will hold a news conference outside the meeting, and then deliver the coffin to the Brown Administration, which is now fast-tracking the construction of the tunnels through the Bay Delta Conservation Plan (BDCP). I strongly urge everybody to attend this great event!

"The proposed Peripheral Tunnels will kill the Delta, the fisheries and the Delta farms," said Delta water expert Barbara Barrigan-Parrilla, Executive Director of Restore the Delta. "The coffin will be painted with Delta place names and values that would be lost."

"Restore the Delta opposes a project that would exterminate salmon runs, destroy sustainable family farms and saddle taxpayers with tens of billions in debt, mainly to benefit a small number of huge corporate agribusinesses on the west side of the San Joaquin Valley," said Barrigan-Parrilla said.

Restore the Delta is a 10,000-member grassroots organization committed to making the Sacramento-San Joaquin Delta fishable, swimmable, drinkable, and farmable to benefit all of California. Restore the Delta works to improve water quality so that fisheries and farming can thrive together again in the Sacramento-San Joaquin Delta. http://www.restorethedelta.org

For more information, contact: Contact: Steve Hopcraft 916/457-5546; steve [at] hopcraft.comTwitter: @shopcraft; or Barbara Barrigan-Parrilla 209/479-2053 barbara [at] restorethedelta.org; Twitter: @RestoretheDelta
Add Your Comments
Support Independent Media
We are 100% volunteer and depend on your participation to sustain our efforts!