Add an Event
Newswire
Calendar
Features
Home
Donate
From the Open-Publishing Calendar
From the Open-Publishing Newswire
Indybay Feature
Publish to Newswire
Add an Event
Related Categories: International | Environment & Forest Defense
Lizards facing extinction due to climate change
by Takver - Climate IMC
Saturday Mar 9th, 2013 11:32 PM
Lizards are again in the news as being under threat from climate change. No, not those two footed political lizards we call politicians, who we elect again and again and who continue to support the corporate greed and short-sightedness of ripping the heart out of mother earth, destroying the environment and climate through subsidizing increasingly expensive fossil fuel extraction. We should be definitely trying to make them extinct. I am talking about four footed reptilian lizards, and in particular those lizards who have evolved live birth as an evolutionary adaptation to living in cold climates. These are South American lizards who have successful adapted to a wide range of ecosystems. 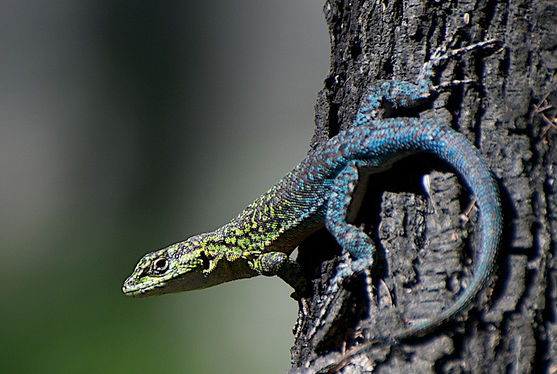 I reported in May 2010 on the challenges facing lizards with climate change in "Why don't the people get rid of the lizards?". We are doing a very good job of driving the four footed reptilian lizards to extinction. Scientists estimate that "by 2080 local extinctions are projected to reach 39% worldwide, and species extinctions may reach 20%.". The 2010 scientific paper - Erosion of Lizard Diversity by Climate Change and Altered Thermal Niches - came to the conclusion that "lizards have already crossed a threshold for extinctions caused by climate change."

The new scientific research - The evolution of viviparity opens opportunities for a lizard radiation but drives it into a climatic cul-de-sac was published in the peer reviewed journal Global Ecology and Biogeography on 6th March 2013. It is by four evolutionary biology researchers: Daniel Pincheira-Donoso, Tom Tregenza, Matthew J. Witt, and Dave J. Hodgson.

The research being conducted on the Liolaemus lizards of South America reveals them to be one of the most diverse groups of vertebrates on earth. Their diversity has only been possible due to their evolution to viviparity (live birth) from oviparity (laying eggs). They are restricted to a range of cold climates and various ecosystems in South America from the Atacama desert in the high Andes mountains to Tierra Del Fuego in Patagonia.

However, they may be trapped by their successful evolutionary adaptation. The research shows that lizards who give birth to live young are unlikely to be able to reverse this evolutionary trend and especially not at the pace we are changing the climate.

Global warming is increasing temperatures in the species' historically cold habitats, which is reducing the areas where they can live. They either have to migrate in altitude or migrate southwards, and there is a limit to both. Migrations are also complex in changing the competitive relationships between species. The scientists conclude that if global warming continues at the same rate, viviparous lizards are facing extinction in the next few decades.

Previous research has indicated that Species biodiversity is under threat from the velocity of climate change with growing concerns that Habitat loss and climate change are causing 6th mass extinction.

Dr Daniel Pincheira-Donoso from Lincoln University is one of the few scientists focussing on the ecology and evolution of these South American lizard species. He commented:

"Lizards' reproduction is largely linked to climatic temperatures and viviparous species are usually found in cold environments. When reptiles initially moved to colder areas they needed to evolve emergency measures to succeed in these harsh places, and we believe viviparity is one of these key measures. However, this transition is mostly one-directional and unlikely to be reversed. Rapid changes in the environment's temperature would demand rapid re-adaptations to secure the species' survival. Through the research we found that over the next 50 years nearly half of the area where these species occur may disappear, causing multiple extinction due to climate change."

So viviparity allowed lizards in the past to invade and adapt to live in cold environments. It was therefore a key trait for evolutionary success. But it seems it will now ultimately lead to multiple events of extinction. Dr Pincheira-Donoso said:

"These lizards are one of the most diverse groups of animals, and are able to adapt to remarkably diverse conditions. Unfortunately, a reduction in cold environments will reduce their areas of existence, which means that their successful evolutionary history may turn into a double-edged sword of adaptation. Their extinction would be an atrocious loss to biodiversity."

Dr Dave Hodgson, a co-author from the University of Exeter, said: "Climate change must not be underestimated as a threat to modern patterns of biodiversity. Our work shows that lizard species which birth live young instead of laying eggs are restricted to cold climates in South America: high in the Andes or towards the South Pole. As the climate warms, we predict that these special lizard species will be forced to move upwards and towards the pole, with an increased risk of extinction."

The scientific paper - The evolution of viviparity opens opportunities for a lizard radiation but drives it into a climatic cul-de-sac was published in the peer reviewed journal Global Ecology and Biogeography on 6th March 2013. The abstract reads:

Evolutionary radiations into novel areas or niches require innovative adaptations. However, rapid subsequent changes in these novel conditions might demand rapid re-adaptations to secure population persistence and prevent extinction. We propose that reptilian viviparity (live birth) is consistent with such a scenario. Using the Liolaemus lizard radiation, we investigate the hypotheses that historical invasions of cold climates have been permitted by transitions to viviparity, and that this parity mode is irreversible. Then, we investigate whether these combined factors restrict viviparous lizards to cold climates, and hence, whether viviparous species are particularly threatened by climate change.

This is one more scientific example how humans are driving the 6th great mass extinction through overpopulation, land use change and climate change. So, say goodbye to another branch of evolution and species biodiversity.