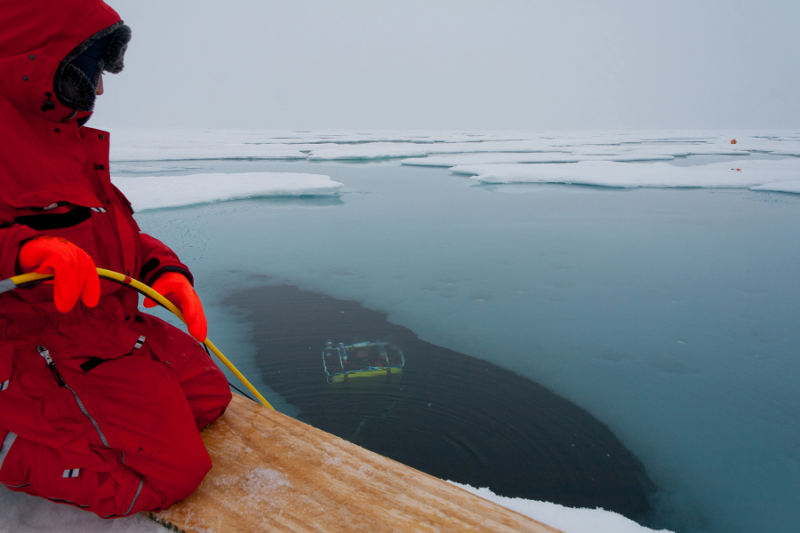 As multi-year sea ice is replaced with thinner first year sea ice, the properties of the sea ice change to allow more light through to the water beneath increasing ocean warming and more melting of sea ice.

The study was conducted by scientists with the Alfred Wegener Institute for Polar and Marine Research in the Helmholtz Association from the research vessel Polarstern. The scientists used a remotely operated vehicle (ROV) to go under the summer sea ice with spectral radiometers. Light transmittance through first year sea ice was nearly 3 times larger than through multi-year ice, with energy absorption 50 per cent larger under first year ice.

So it seems we have another climate feedback loop increasing the reduction in Arctic sea ice. This adds to the albedo feedback mechanism where the reduction in sea-ice reduces the albedo (reflectivity) which allows greater energy to be absorbed by the ocean and greater melting of sea ice.

The study abstract for Changes in Arctic sea ice result in increasing light transmittance and absorption says that:

"Thus, a continuation of the observed sea-ice changes will increase the amount of light penetrating into the Arctic Ocean, enhancing sea-ice melt and affecting sea-ice and upper-ocean ecosystems."

The Alfred Wegener Institute for Polar Research reported preliminary findings on the research voyage on their website in a media release in October 2012:

"According to the findings of the returning Polar researchers, the rapid changes in the Arctic were not therefore restricted to the sea surface. Atlantic water flowing into the Arctic at a depth of several hundreds had an elevated temperature and salinity which could be measured down to a depth of several thousands of metres in the Arctic Basins. Images and measurements of the bottom of the sea showed for the first time that the deep sea of the Central Arctic is not a desert, but that frequently accumulations of sea cucumbers, sponges, feather stars and sea anemones gather to feed on the sea algae."

"The warm temperatures, the retreat of the ice and the greater light availability beneath the ice causes the seasonality of the Central Arctic to shift. The production and the export of algae is taking place earlier compared with previous years, as the results of annually anchored sediment traps show. As a result of the extremely thin ice cover, Polarstern was able to navigate far into the North later in the year than usual. The sea ice physicists were therefore able to collect important data at the start of the freezing period. The measurements on the new thin ice are important, because this sea ice will occur more frequently in the future."

Summer sea ice reduction is on a downward spiral with the Summer Sea Ice extent minimum record smashed in September 2012. Climate models still show that summer sea ice will not vanish for 2 to 3 decades. The 2012 study by Wang and Overland (Wang et al 2012) says "the interval range for a nearly sea ice free Arctic is 14 to 36 years, with a median value of 28 years. Relative to a 2007 baseline, this suggests a nearly sea ice free Arctic in the 2030s."

But observations are far ahead of the modelling. According to Pennsylvania State University climate scientist Michael Mann "Sea-ice decline is a good example of one of those areas where the projections are too conservative, i.e. where the observed decline is decades ahead of schedule relative to the model projections," in an email to LiveScience.

Professor Peter Wadhams from Cambridge University, a noted Arctic sea-ice expert, predicts summer sea ice could be all gone by 2015 or 2016.

Here is a youtube video of Prof Peter Wadhams interviewed on RT, published on 22 September 2012.

As the sea ice retreats, the ocean warms up. The risk is that a methane climate feedback mechanism could be triggered. With the Arctic sea warming, undersea permafrost and methane hydrates could melt releasing vast quantities of methane, a very potent greenhouse gas.