by Takver - Climate IMC
Records were smashed in the Arctic during 2012 with rapid changes occurring in sea ice extent and surface melt of Greenland Ice sheet according to the latest Arctic Report Card launched at the fall meeting of AGU in San Fransisco this week. These changes happened despite air temperatures being fairly unremarkable. It was the warmest summer in the last 170 years on Greenland. 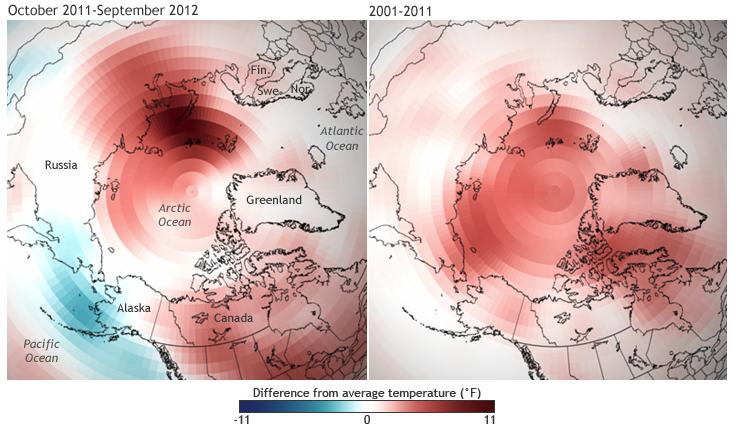 “The Arctic is changing in both predictable and unpredictable ways, so we must expect surprises,” said Jane Lubchenco, Ph.D., under secretary of commerce for oceans and atmosphere and NOAA administrator, during a press briefing at the American Geophysical Union annual meeting in San Francisco, Calif. “The Arctic is an extremely sensitive part of the world and with the warming scientists have observed, we see the results with less snow and sea ice, greater ice sheet melt and changing vegetation.”

“Popular perceptions of the Arctic as a distant, icy, cold place that has little relevance to those outside the region are being challenged”, said Martin Jeffries, co-editor of the 2012 Report Card and Arctic science adviser, Office of Naval Research & research professor, University of Alaska-Fairbanks. “As snow and ice retreat, the marine and terrestrial ecosystems respond, and talk of increased tourism, natural resource exploitation, and marine transportation grows. The Arctic Report Card does a great service in charting the many physical and biological changes.”

“The record low spring snow extent and record low summer sea ice extent in 2012 exemplify a major source of the momentum for continuing change,” added Jeffries. “As the sea ice and snow cover retreat, we’re losing bright, highly reflective surfaces, and increasing the area of darker surfaces—both land and ocean—exposed to sunlight. This increases the capacity to store heat within the Arctic system, which enables more melting - a self-reinforcing cycle.”

The Arctic report card for 2012 was contributed to by 141 scientists. NOAA’s Climate Program Office has been producing the report card since 2006.

Watch the press conference on Wednesday 5 December 2012 for the launch of the Report Card at the AGU Fall meeting in San Fransisco. (Watch at Youtube)

As well as the loss in albedo or reflectivity of summer sea ice, there are major potential climate feedbacks which include release of greenhouse gases such as methane and carbon dioxide locked away as methane hydrates in sediments on the continential shelf particularly off the Siberian coast, and also frozen as organic matter in permafrost in countries circling the Arctic.

The 'Diagram of Doom' done by Sam Carana on behalf of the Arctic Methane Emergency Group (AMEG) for the 2011 AGU meeting shows some of the dynamics and feedbacks involved in accelerated arctic warming including thawing permafrost and release of methane from methane clathrates on the continental shelf seabed. Certainly there is the potential for methane releases in the Arctic to cause runaway global warming, although we may not have quite reached a tipping point yet.

The Arctic Methane Emergency Group released it's Strategic Plan for combating Arctic warming on Tuesday 4 December 2012 during AGU. It highlights that "we are approaching a point of no return, after which it will be impossible to rescue the situation." Controversially, it raises a number of possible geo-engineering scenarios to initiate cooling the Arctic to stop the drastic retreat in summer sea ice extent and prevent the more potent methane feedback loops from permafrost and release of methane clathrates in the sediments on the Siberian continental sea-shelf.

Asked at the press conference about the reports of release of methane from permafrost and sediments, Martin Jeffries responded:

"There have been recent reports, by recent I mean the last 2 or 3 years, of significant venting of methane from the Eastern Siberian Sea Shelf and that generated a lot of interest, and debate of whether this was a new thing or been going on for all the time but it had just been discovered because finally it was possible to get a vessel in there to investigate the possible chemistry and gas content and so on.

Related Categories: International | San Francisco | Environment & Forest Defense
Add Your Comments
Support Independent Media
We are 100% volunteer and depend on your participation to sustain our efforts!