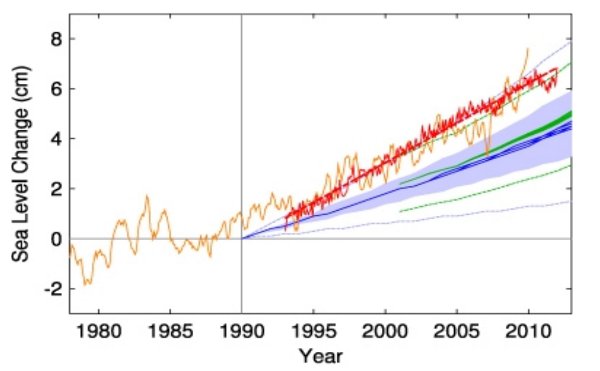 Figure 2: Sea level measured by satellite altimeter (red with linear trend line; AVISO data from (Centre National d'Etudes Spatiales) and reconstructed from tide gauges (orange, monthly data from Church and White (2011)). Tide gauge data were aligned to give the same mean during 1993–2010 as the altimeter data. The scenarios of the IPCC are again shown in blue (third assessment) and green (fourth assessment); the former have been published starting in the year 1990 and the latter from 2000. From Comparing climate projections to observations up to 2011 Stefan Rahmstorf et al 2012 Environ. Res. Lett. 7 044035 doi:10.1088/1748-9326/7/4/044035

Rising Global temperatures are consistent with past projections made by the IPCC fourth assessment report. But Projections for sea level rise amounted to 2 mm a year, while sea-levels are actually rising at a rate of 3.2 mm a year.

Lead author of the study, Stefan Rahmstorf, said: "This study shows once again that the IPCC is far from alarmist, but in fact has under-estimated the problem of climate change. That applies not just for sea-level rise, but also to extreme events and the Arctic sea-ice loss."

The study - Comparing climate projections to observations up to 2011 - looked at global temperatures and sea-level data over the past two decades, comparing them both to projections made in the IPCC's third and fourth assessment reports.

We analyse global temperature and sea-level data for the past few decades and compare them to projections published in the third and fourth assessment reports of the Intergovernmental Panel on Climate Change (IPCC). The results show that global temperature continues to increase in good agreement with the best estimates of the IPCC, especially if we account for the effects of short-term variability due to the El Niño/Southern Oscillation, volcanic activity and solar variability. The rate of sea-level rise of the past few decades, on the other hand, is greater than projected by the IPCC models. This suggests that IPCC sea-level projections for the future may also be biased low.

The researchers, from the Potsdam Institute for Climate Impact Research, Tempo Analytics and Laboratoire d'Etudes en Géophysique et Océanographie Spatiales, rule out as very unlikely several possible causes for this discepancy such as internal multi-decadal variability, or a temporary episode of ice discharge from one of the ice sheets.

The researchers say "the observed rate of sea-level rise on multi-decadal timescales over the past 130 years shows a highly significant correlation with global temperature (Vermeer and Rahmstorf 2009) by which the increase in rate over the past three decades is linked to the warming since 1980, which is very unlikely to be a chance coincidence."

"In contrast to the physics of global warming itself, sea-level rise is much more complex," Rahmstorf says. "To improve future projections it is very important to keep track of how well past projections match observational data." Rahmstorf stresses that "the new findings highlight that the IPCC is far from being alarmist and in fact in some cases rather underestimates possible risks."