"In November 2012, Santa Cruz residents passed Measure P which guarantees residents the right to vote on whether to pursue a seawater desalination project in the future." 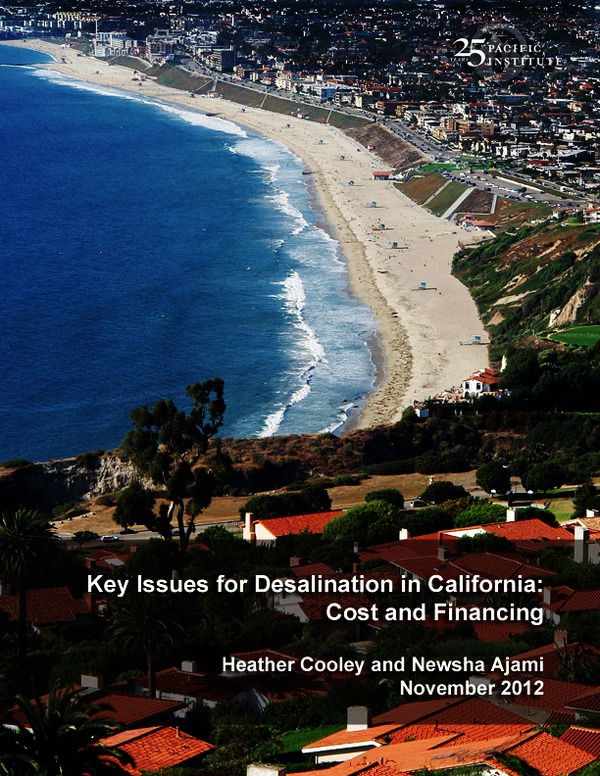 Download PDF (997.4KB)
NOVEMBER 27, 2012 – Oakland, Calif.: Interest in seawater desalination in California is high, with 17 plants proposed along the California coast and two in Mexico. But driven in part by high costs, uncertain financial markets, and the availability of alternatives, financing desalination plants is proving to be a major challenge. For example, the Carlsbad desalination project – perhaps the furthest along the development timeline – has had all of the necessary permits in place since 2009 but to date has been unable to secure financing for the project.

Economics – including both the cost of the water produced and the complex financial arrangements needed to develop a project – are key factors that will determine the ultimate success and extent of desalination in California. New research from the Pacific Institute, Key Issues for Seawater Desalination in California: Cost and Financing, assesses desalination costs, financing, and risks associated with desalination projects. The Pacific Institute analysis finds that the cost to produce water from a desalination plant is high but subject to significant variability, with recent estimates for plants proposed in the state ranging from $1,900 to more than $3,000 per acre-foot.

“Seawater desalination remains among the most expensive water-supply options available, although the public and decision-makers must exercise caution when comparing costs among different projects,” said Heather Cooley, co-director of the Pacific Institute Water Program and lead author of the report. “In some cases, costs are reported in ways that are not directly comparable. For example, some report the cost of the desalination plant alone, while others include the cost for additional infrastructure needed to integrate the desalination plant into the rest of the water system. Some estimates include costs to finance the project, while others don’t. Even when there is an apples-to-apples comparison, there are a number of site- and project- specific factors that make cost comparisons difficult, such as energy, land, and labor costs and the availability of visible and hidden subsidies.”

For capital-intensive projects like desalination plants, financing can be a major challenge. Desalination projects in California that are being developed solely by public water agencies will likely use municipal revenue bonds or other conventional financing methods, with possible additional support through various government grant and loan programs. Some public agencies, however, are exploring various types of public-private partnerships. These projects will likely be financed through some combination of debt, especially tax exempt private-activity bonds, and private equity. Although typically more expensive than government-sponsored debt financing, private financing provides a mechanism to shift some of the cost and the project-related risks to the private sector.

As recent experience in the United States and Australia has shown, desalination projects also entail risks specific to large water- supply projects, including demand risk – the risk that water demand will be insufficient to justify continued operation of the plant due to the availability of less expensive alternative supplies and conservation and efficiency improvements. In Australia, four of the six desalination plants that have been developed since 2006 are being placed in stand- by mode. Likewise, the Tampa Bay Desalination Plant in Florida is operated considerably below full capacity because demand is lower than expected and less expensive water-supply options are available. Demand risk raises serious concerns about the size of desalination projects and when they should be built.

For those pursuing public-private partnerships, a key element of that partnership is the allocation of risk. If a water utility has a contract establishing minimum commitments to purchase water from a desalination plant, it faces having to buy more water than it needs if actual demand drops – a significant disincentive for water agencies to pursue more cost-effective water supply and water conservation and efficiency programs. This effectively shifts demand risk from the private sector to the public sector.

The Pacific Institute’s previous analysis of the advantages and disadvantages of seawater desalination, Desalination, With a Grain of Salt, has proven to be a key tool used by policy makers, regulatory agencies, local communities, and environmental groups to raise and address problems with specific proposals, downloaded nearly 700,000 times. Beginning in 2011, the Institute initiated a new research project on seawater desalination, including conducting some 25 one-on-one interviews with industry experts, water agencies, community and environmental groups, and regulatory agencies to identify some of the key outstanding issues.

Key Issues for Seawater Desalination in California: Cost and Financing can be downloaded free of charge from the Pacific Institute website at http://www.pacinst.org/reports/desalination_2013/financing.htm.

The Pacific Institute is one of the world’s leading independent nonprofit research organizations working to create a healthier planet and sustainable communities. Based in Oakland, Calif., the Institute conducts interdisciplinary research and partners with stakeholders to produce solutions that advance environmental protection, economic development, and social equity – in California, nationally, and internationally. www.pacinst.org
http://pacinst.org/reports/desalination_20...
Add Your Comments
LATEST COMMENTS ABOUT THIS ARTICLE
Listed below are the latest comments about this post.
These comments are submitted anonymously by website visitors.