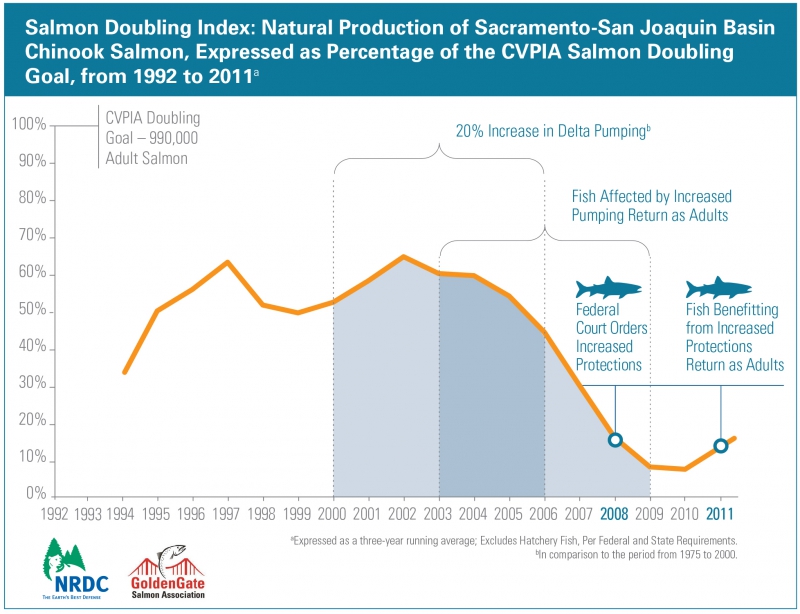 On one historic day in 1992, I marched through the State Capitol Building and adjoining Senate Offices with hundreds of recreational fishermen, commercial fishermen and environmentalists working for the passage of the Central Valley Project Improvement Act (CVPIA). Arrayed in yellow and green commercial fishing slickers and colorful recreational fishing group shirts and jackets, we carried big banners and signs calling for the passage of the CVPIA and restoration of salmon populations.

This protest was held long before the draconian restrictions on freedom of speech descended on the Capitol and other state and federal government facilities like a dark, toxic cloud. If we tried to do this today, we would be arrested en masse by state and federal police authorities.

The momentum and enthusiasm for salmon restoration in the Central Valley kept building to a point where Congress really had no choice but to pass the bill.

The Central Valley Project Improvement Act, signed by President George H.W. Bush in the fall of 1992, set a goal of doubling the Bay-Delta watershed’s Chinook salmon runs from 495,000 to 990,000 wild adult fish by 2002. The legislation also mandated the doubling of other anadromous fish species, including Central Valley steelhead, white sturgeon, green sturgeon, striped bass and American shad, by 2002.

The landmark legislation also made fish and wildlife a purpose of the Central Valley Project for the first time. The CVPIA’s Anadromous Fish Restoration Program was supposed to dedicate 800,000 acre-feet of CVP water every year to environmental protection.

The Act included reforms intended to encourage efficient water use, including authorizing transfers of agricultural water and creating a land retirement program to reduce water use on tainted land. It shortened the term of Central Valley Project (CVP) contracts from 40 to 25 years and required a reduction in agricultural water subsidies.

Unfortunately, a decade after the law’s deadline, the salmon fishery continues to struggle to rebound due, in part, to ineffective enforcement by federal and state agencies and continued excessive pumping of fresh water from the Bay-Delta, primarily for corporate agribusiness interests in the San Joaquin Valley.

According to a new salmon index released by the Natural Resources Defense Council (NRDC) and the Golden Gate Salmon Association (GGSA), the Central Valley Chinook salmon fishery has suffered a dramatic collapse over the past decade, now standing at only 13 percent of the population goal required by federal law.

The index was released following the closure of California’s ocean salmon fishing season on Sunday, November 11, and the 20th anniversary of the CVPIA.

The NRDC and GGSA analysis, published in the Salmon Doubling Index, reveals a steady decline in Bay-Delta Chinook salmon from 2003 through 2010, at which point it reached a record low of 7 percent.

While the state and federal governments claimed that ocean conditions prompted the decline, fishing and environmental groups pointed to increased water diversions as a significant cause of this decline. Between 2000 and 2006, freshwater pumping from the Bay-Delta increased 20 percent in comparison to 1975-2000. The record water export year was 2005 until a new record was set in 2011 under the Brown and Obama administrations.

“Despite indefensible foot-dragging and countless lawsuits, salmon restoration has remained the lynchpin of federal water policy in California for twenty years,” said Rep.Miller. “California salmon support businesses and communities up and down the West coast, and it’s long past time for the federal agencies to take their responsibility to our state’s wild fisheries seriously. The federal government must restore California’s iconic salmon runs to health: that’s the law.”

“Salmon are the canary in the coal mine for the Bay-Delta economy and ecosystem,” said Barry Nelson, senior policy analyst with NRDC’s Water Program. “California salmon, the fishing industry and the Bay-Delta ecosystem all need adequate water flows to maintain their health over the long-term. The Department of the Interior and the State of California need to dramatically step-up efforts to protect the San Francisco Bay-Delta ecosystem and restore salmon populations.”

In 2008, in response to a lawsuit brought by NRDC, Earthjustice and the Pacific Coast Federation of Fishermen’s Associations, stronger federal court-ordered protections went into effect for salmon and other native fish, reducing water pumping from the Bay-Delta.

“In 2011, there was a modest rebound of wild adult Chinook salmon, directly correlating to this reduction in pumping,” according to GGSA and NRDC. “Chinook salmon have a three-year life cycle.”

As a result, the benefits of stronger protections in 2008 are reflected in the numbers of adult fish that returned to spawn in 2011, the groups said. Early federal agency projections predict stronger numbers for this year’s salmon run, which is currently underway. Nevertheless, the salmon index for 2012 will likely remain dramatically short of meeting state and federal goals.

Victor Gonella, president of the Golden Gate Salmon Association, emphasized, “Our salmon runs are essential to California’s natural heritage, to fishing families and to an industry that reaches from the fishing dock to your dinner table. Restoring healthy salmon runs means healthy local food, healthy communities and a healthy economy.”

“After two closed salmon fishing seasons in 2008 and 2009, and a token season in 2010, fishermen had a chance to fish this year, but we remain far below the healthy runs required by law,” said Zeke Grader, executive director of Pacific Coast Federation of Fishermen’s Association and GGSA board member. “The stronger runs in 2011 and this year show that, with stronger protections and more effective restoration programs, these magnificent fish will come roaring back.”

The groups said state and federal agencies can step-up their efforts to restore salmon by acting on the following recommendations:

• The Department of the Interior should reform CVPIA water contracts and revamp its salmon doubling efforts in response to a scathing independent review. Specifically, Interior should better manage water and restoration funds dedicated to salmon recovery, incorporate the latest scientific information and appoint a manager to be accountable for the progress of the restoration program.

• The State Water Resources Control Board should set stronger standards to protect salmon in the San Joaquin River and the Bay-Delta ecosystem, in proceedings to revise these standards that are currently underway.

• The Department of Fish and Game should launch an ambitious state salmon restoration effort.

• The Department of the Interior should aggressively implement NRDC’s agreement to restore the salmon run on the San Joaquin River.

The Salmon Doubling Index graphic and a table listing the index by year can be found here: http://switchboard.nrdc.org/blogs/kcoplin/Salmon%20Index%20Chart%20and%20Table.pdf

Restore the Delta: How many fish will be driven to extinction?

Restore the Delta (RTD) commented on the release of the index in their "Delta Flows" newsletter, asking how many salmon and other fish species must be sacrificed to provide subsidized water to corporate agribusiness interests on the west side of the San Joaquin Valley (http://www.restorethedelta.org/salmon-goals-meet-water-politics/).

“As Barry Nelson of the Natural Resources Defense Council (NRDC) points out in a recent blog (http://switchboard.nrdc.org/blogs/bnelson/the_20th_anniversary_of_the_cv.html), runs have improved on a few small streams such as Clear, Butte, and Battle creeks as a result of this restoration fund. But on nearly all of the major rivers of the Central Valley – the Sacramento, the San Joaquin, the Stanislaus, the Tuolumne, the Merced and the Cosumnes – salmon numbers have declined, not doubled, over the past two decades," RTD noted.

“In our last newsletter, we reported on a newly-released study by the U.S. Geological Survey, which found that water exports have degraded conditions for fish in both the Delta and San Francisco Bay. Nelson cites a 2008 independent review of the CVPIA’s restoration program that includes the same findings. (That review is titled Listen to the River.)

According to Nelson, “In remarkably direct language for a review of this type, scientists concluded that meeting CVPIA and ESA obligations will require ‘a significant reduction in the amount of water pumped out of the system.’” But Nelson notes that federal agencies have mostly ignored the recommendations in the review.

“Meanwhile, export contractors try to scare us all with the specter of higher food costs when they get less than their expected amount of water from the Delta,” the group said. “They don’t mention that contracts for water delivery are meaningless when those contracts promise water that our over-subscribed system doesn’t reliably produce, and promise it to users with last-in-line water rights.”

“How many fish species – species we don’t eat and species we do – are they willing to drive to extinction in order to keep food costs artificially low or almond exports high?” RTD concluded.

While the federal government fails to comply with the provisions of the CVPIA, the Brown and Obama administrations are fast-tracking the Bay Delta Conservation Plan to build the peripheral tunnels. This plan will hasten the extinction of Central Valley salmon, Delta smelt, longfin smelt and other species, according to agency and independent scientists.