Photo of Representative John Garamendi speaking at a rally against the peripheral canal at the State Capitol on July 25 by Dan Bacher. 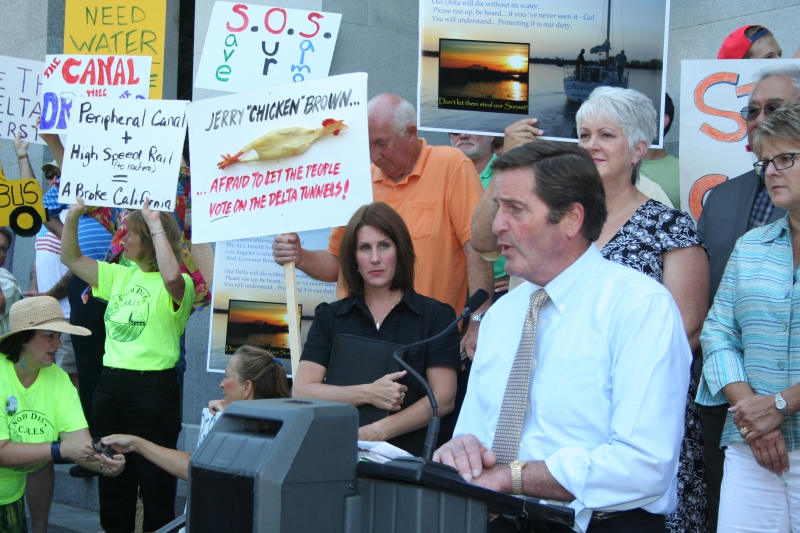 A review of Federal Election Commission records has exposed an effort by the politically powerful Westlands Water District to replace the two pro-Delta Representatives, John Garamendi and Jerry McNerney, with two candidates more aligned with their effort to drain the Sacramento-San Joaquin River Delta.

Congressional candidates Kim Vann and Ricky Gill have taken tens of thousands of dollars from the California Westside Farmers PAC and from individual Westlands board members and prominent growers, according to the Federal Election Commission.

Westlands Water District is known for its relentless efforts over the years to stop the restoration of salmon, steelhead, Delta smelt and other fish species on the Sacramento and San Joaquin rivers, its unsuccessful legal campaign to block Trinity River restoration and its current campaign to build the peripheral tunnels.

Westlands growers, their PACs, and their associated growing associations have given at least $35,000 to Congressional Candidate Kim Vann, who is running in California District 3 against incumbent Congressman John Garamendi.

In the California Congressional District 9 race, Westlands, their associated growers associations, and Westlands Board Members have contributed over $14,000 to Congressional Candidate Ricky Gill.

The California Westside Farmers PAC has donated $5,000 to Gill and the California Cotton Growers Association has contributed an additional $500 to support Gill’s effort to unseat Congressman Jerry McNerney. The link to the Gill contributions is: http://query.nictusa.com/cgi-bin/com_detail/C00079566/

Members of the Westlands Water District's Board of Directors, including Donald Devine, Daniel Errotabere, Frank Coehlo, Gary Esijian and the Woolf Family, contributed an additional $8500 to Gill's campaign.

The link to the Westlands Water District Board of Directors is: http://www.westlandswater.org/wwd/board.asp?title=Board%20of%20Directors&cwide=1280

Special interests are trying to buy the election

Delta and salmon advocates believe that Westlands funding of Vann’s and Gill’s campaigns represents a blatant attempt to replace Delta Congressional representatives who have opposed Westlands’ Peripheral Tunnels plan with officeholders who’d be more compliant with Westlands’ plans to increase water exports to their drainage-impaired land on the west side of the San Joaquin Valley.

“We hear about special interests trying to buy the political process,” said Dr. Mark Rockwell, California state representative of the Endangered Species Coalition and member of the Northern California Council, Federation of Fly Fishers. “We don't realize that it is happening very close to home. West San Joaquin valley farm interests want more water, and that water must come from the S.F. Bay-Delta, and they know it.”

“They also know that Representatives McNerney and Garamendi stand for protection of Delta communities and Delta farmers, not west San Joaquin farm interests,” said Rockwell. “Their money given to Vann and Gill is done only to ‘buy’their votes to ship water past the Delta, destroying water quality for Delta farmers and communities, and also driving Delta fish species like salmon toward extinction.”

On July 25, 2012, Congressman Garamendi stood on the steps of the Capitol with hundreds of Delta farmers, fishermen, members of the Winnemem Wintu, Pit River and Hoopa Valley Tribes and environmentalists to publically express his opposition to Governor Jerry Brown’s plan to build the peripheral tunnels.

Congressmen McNerney and Garamendi have co-sponsored a HR 6484, a bill calling for a cost benefit analysis of the proposed tunnel project to be completed by the federal government.
(http://www.calitics.com/diary/14613/garamendi-introduces-bill-requiring-costbenefit-analysis-of-tunnels)

On October 11, McNerney stated, “Not only would a canal destroy the vital estuary that we depend on, it could place an insurmountable burden on users to pay for a plan that was flawed to begin with, setting our state water policy back decades. We will continue to demand a seat at the table and to have a voice in the process."

The same west side growers lobbied heavily against a similar bill authored by Bill Berryhill (R-Modesto) that stalled in the California Assembly during the last California legislative session.

Westlands is not a charity - it expects a return on investment

Advocates for the restoration of California’s struggling salmon and other fish populations note that Westland’s political action committee is not a charity. It invests in those who support its agenda – and expects a return on investment. They are trying to weaken the Delta’s voice in Congress on fair water policy.

Westlands Water District growers have benefitted for years from federally subsidized Delta water exports. Now, they are using the profits they have obtained from subsidized water, at tremendous expense to the taxpayers and the environment, to muscle political influence to secure future water supplies.

The peripheral tunnels would deal the final death blow to the Delta’s $5 billion annual agriculture economy, the region’s $650,000,000 recreation economy, and to Delta fisheries, according to Delta and salmon advocates. If built, the peripheral tunnels would hasten the extinction of Central Valley steelhead, Sacramento River chinook salmon, green sturgeon, Delta smelt, longfin smelt, Sacramento splittail and numerous other fish species.

Record amounts of water were exported out of the Delta pumps in 2011 to irrigate land farmed by Westlands and other west side agribusiness interests, including Stewart Resnick's Paramount Farms in Kern County. The massive diversions resulted in the “salvage” of over 11 million fish, including a record 9 million native Sacramento splittail. The construction of the tunnels would only exacerbate the collapse of imperiled fish populations. (http://www.counterpunch.org/2012/05/07/carnage-in-the-pumps)

Delta and salmon advocates believe that regardless of political affiliation, Delta area voters should be outraged that Westlands Water District leaders are trying to buy influence in the Delta to stop the work of two Congressional Representatives, John Garamendi and Jerry McNerney, who have been strong advocates against Westlands’ scheme to build two fish-killing peripheral tunnels.

This government boondoogle, being pushed through Governor Jerry Brown’s Bay Delta Conservation Plan, would divert the majority of the Sacramento River away from the estuary and send it directly to corporate agribusiness interests on the west side of the San Joaquin Valley.

Many Delta residents are now asking: How can they expect a candidate to represent their interests when they are taking money from the California Cotton Growers Association, California Westside Farmers Federal PAC, and Westlands corporate agribusiness leaders - all of whom who have benefited year after year from millions of dollars of federally subsidized water exported from the Delta pumps?
Add Your Comments
Support Independent Media
We are 100% volunteer and depend on your participation to sustain our efforts!