Add an Event
Newswire
Calendar
Features
Home
Donate
From the Open-Publishing Calendar
From the Open-Publishing Newswire
Indybay Feature
Publish to Newswire
Add an Event
Related Categories: U.S. | Government & Elections
New Legal Argument By Cris Ericson USMJP To Include All Candidates In Debates!
by Cris Ericson
Wednesday Oct 17th, 2012 10:45 PM
Cris Ericson argues a new legal cause of action and seeks a pro bono attorney to take it to Court. Political Party affiliation is a choice like religion, and therefore should fall under EEOC laws. All candidates should be included in debates. 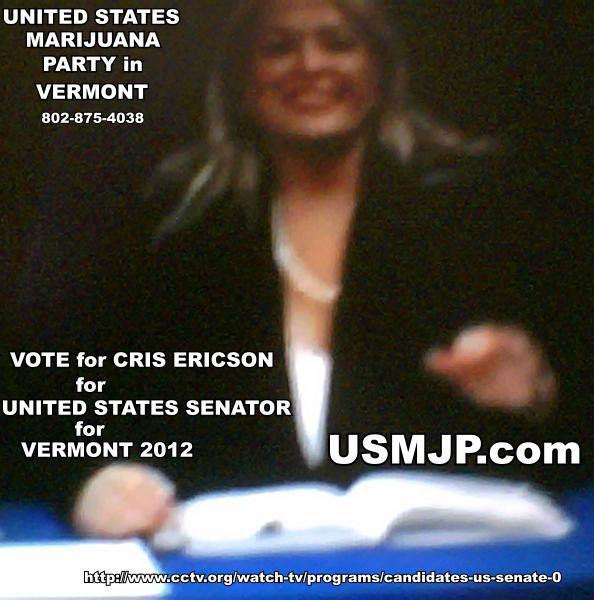 Cris Ericson, United States Marijuana Party
candidate in Vermont, http://USMJP.com
running for both Governor and
for U.S. Senate, feels
that she has been discrminated against
by publicly funded Vermont Public Radio
and by the Burlington Free Press and
by FOX 44 / ABC 22 / WCAX TV, etc.

Cris Ericson USMJP believes she has a
“legal cause of action” that will succeed,
and she needs pro bono legal counsel
to take it to court:

Candidates are seeking employment,
a job with a paycheck and benefits,
and therefore their job hunt falls under the EEOC,
Equal Employment Opportunity Commission laws,
which include making it illegal to discriminate against
someone for their sexual orientation or religion.

Political party affiliation is a choice,
and it is just as much a personal choice as
sexual orientation and religion.

The Supreme Court of the United States,
if the case has to go that high,
should clearly determine that Dave Eagle (Liberty Union Party -
a secessionist, socialist, peace party),
Cris Ericson
(United States Marijuana Party in Vermont http://usmjp.com )
and Emily Peyton (independent) have been discriminated
against due to their choice of political affiliation.

Cris Ericson and Emily Peyton were required
to obtain just as many ballot access petition signatures
as Randy Brock (R) and incumbent Governor Peter Shumlin (D),
so therefore,
they had the same requirements to appear on the ballot
and they should not have been left out of any
political candidate debates, especially publicly funded
political candidate debates on Vermont Public Radio.

Incumbent U.S. Senator Bernie Sanders (independent)
and John MacGovern (R) were
invited to debates that candidate
Cris Ericson, also with the same number of ballot access petition
signtures for U.S. Senate, was excluded
from based on her personal choice of
political party affiliation.

Therefore, any Federal Judge
should find that because a personal choice of
political party affiliation is equivalent to a
person’s personal choice of sexual orientation
and/or religion,
that Cris Ericson was wrongfully
discriminated against in two political races,
for Governor and for U.S. Senate.

Some of the Governor candidate debates that U.S. Marijuana Party
in Vermont candidate Cris Ericson USMJP was excluded from:

4 days ago – Vermont's candidates for Governor square off
tonight right here on Channel 3.


MONTPELIER (AP) - As they gear up for their first debate
of the campaign, Vermont Gov. Peter Shumlin and Republican
challenger Randy Brock are squabbling ...

2 days ago – Peter Shumlin and his Republican challenger
Randy Brock influenced the direction of the debate.
Hosted by WCAX and held at the Community ...

Example of a U.S. Senate debate that Cris Ericson USMJP was excluded from:


http://usmjp.com
Add Your Comments
Support Independent Media
We are 100% volunteer and depend on your participation to sustain our efforts!