Add an Event
Newswire
Calendar
Features
Home
Donate
From the Open-Publishing Calendar
From the Open-Publishing Newswire
Indybay Feature
Publish to Newswire
Add an Event
Related Categories: East Bay | Police State & Prisons | Racial Justice
Alan Blueford Press Conference on Released Oakland Police Reports, 10/5/12: video & photos
by Dave Id
Sunday Oct 7th, 2012 1:34 AM
With the Alan Blueford police reports having been released on October 2nd to the Blueford family at the Oakland city council meeting and online to the general public, a press conference was called for October 5th in front of Oakland city hall to address the information revealed in the reports, as well as what was redacted and not included. The press conference was originally scheduled to feature the Blueford family, but the anguish of reliving the death of their 18-year-old son through the police reports proved too much for a public appearance at this time. Standing in were long-time Oakland civil rights attorneys Walter Riley and Dan Siegel. (Full video below.) 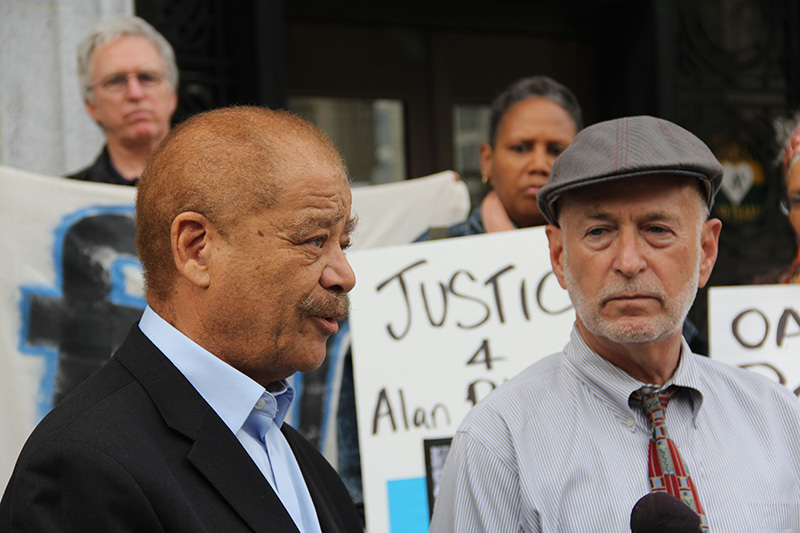 
Siegel and Riley noted that contrary to the initial OPD statements about the killing of Alan Blueford that there had been a gun battle, the police reports show no such thing. It was Oakland officer Miguel Masso who shot himself in the foot. Witness statements make clear that Alan Blueford had fallen and was on the ground struggling to get up when Masso shot him three times. Alan Blueford's last words were, "I didn’t do anything." Siegel and Riley make plain that they believe the killing was a murder, when a police officer stands above and shoots down at an unarmed person on the ground below. Fear for his life or safety, that Masso likely claims as some sort of self-defense, can not be justified by the known facts of the case, only by Masso's racist fear of a young African American man.

Notably missing from the released police reports was a statement about the shooting from Masso himself. Also, there was no mention of whether Masso had his chest camera on at the time of the shooting, despite the fact that it is OPD policy that officers turn their cameras on during tense interactions with the public.

There remain many unanswered questions, such as at what point did Masso shoot himself in the foot, before or after he gunned down Alan Blueford. An Oakland forensics report declares that Alan Blueford's fingerprint was found on an ammunition clip found in the vicinity but not the gun police also found in the area, the gun that OPD claims was brandished by Alan Blueford prior to the shooting.

As for future moves for justice by the Blueford family and supporters, Walter Riley and Dan Siegel noted that final reports on the killing have yet to be issued by the Oakland police department and the office of Alameda district attorney Nancy O'Malley, even though the limited number of witnesses and technical aspects of the case have been known for months. Walter Riley says that the DA is often a hindrance to achieving justice in cases of Oakland police killing unarmed youth of color. 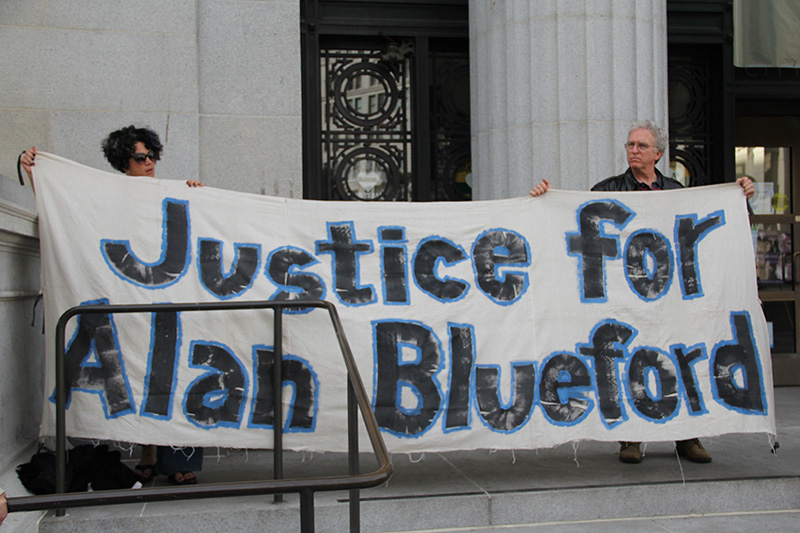 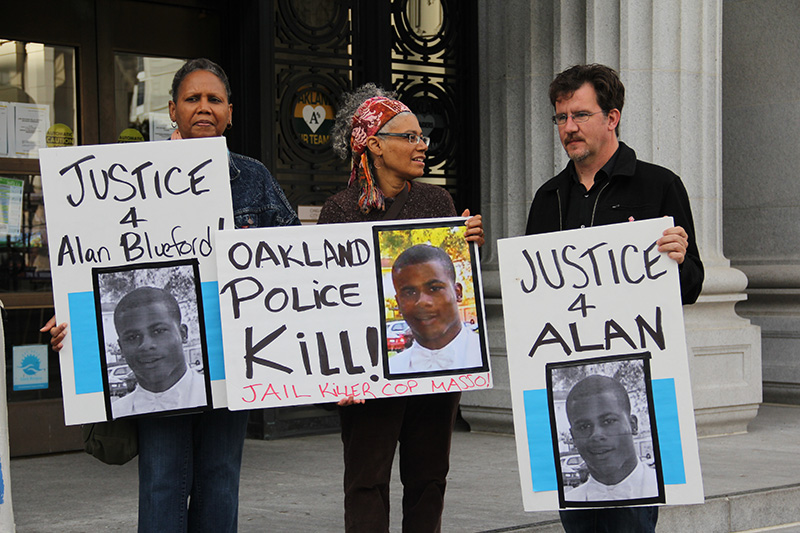 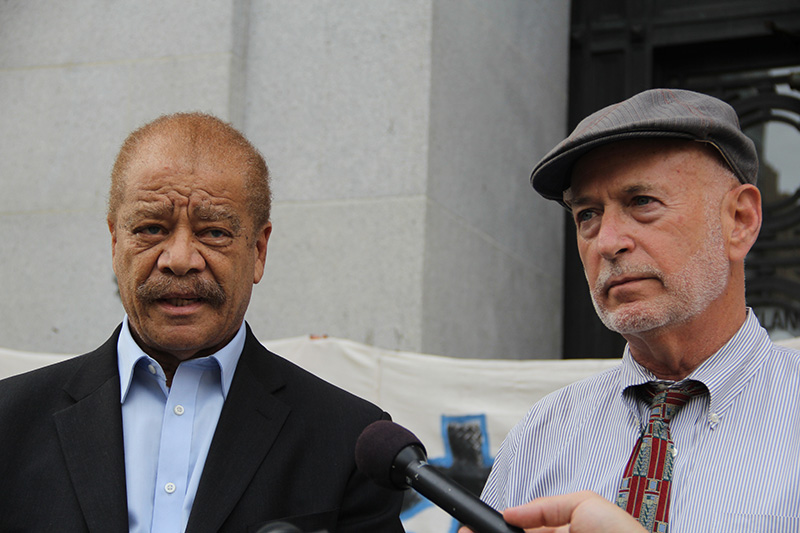 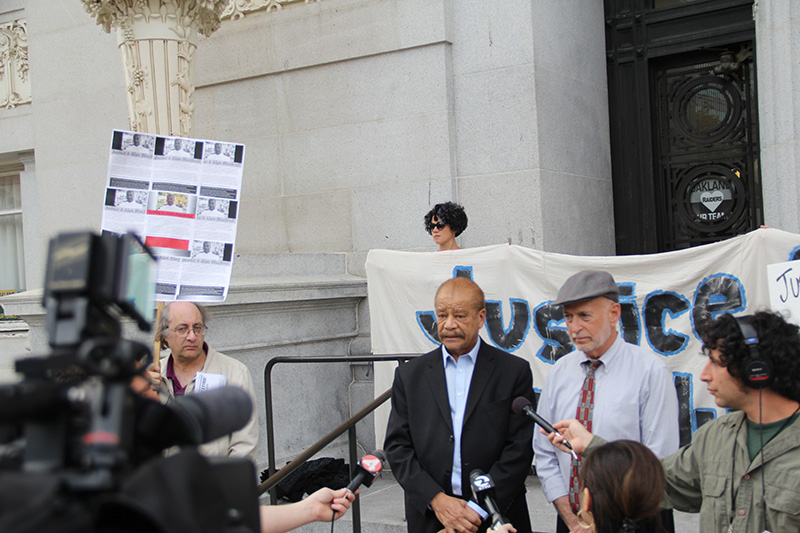 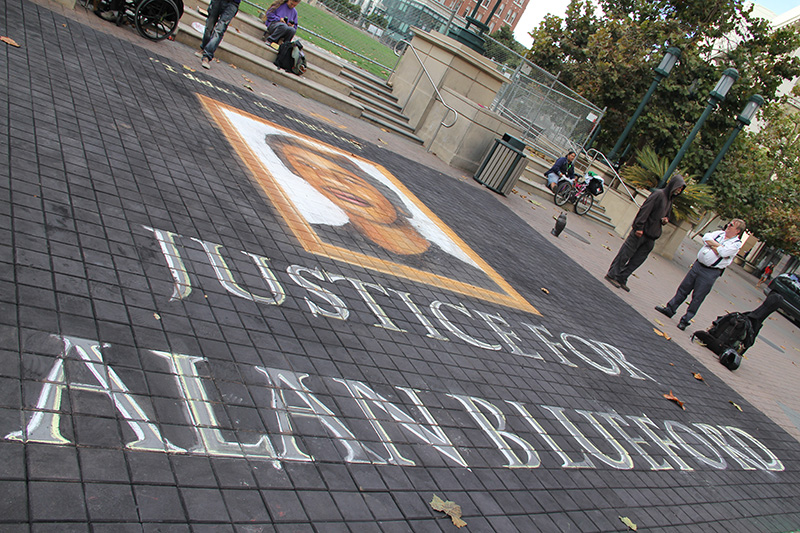 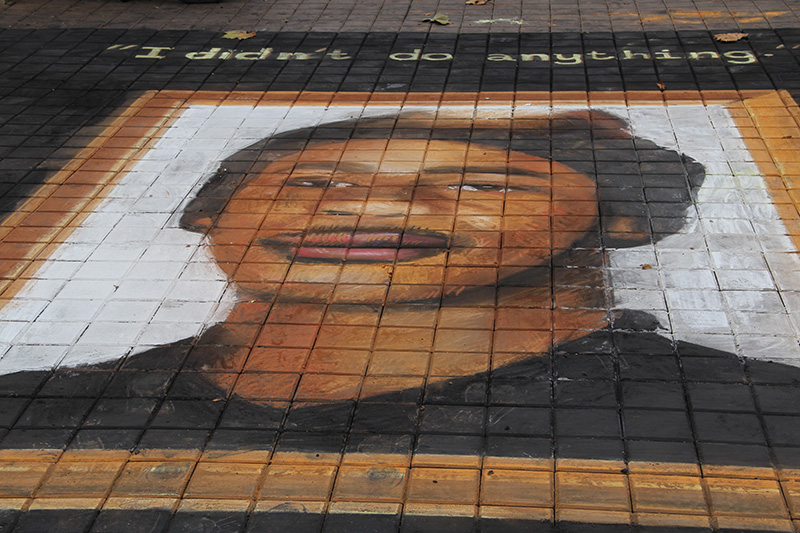 http://www.indybay.org/newsitems/2012/09/2...
Add Your Comments
Support Independent Media
We are 100% volunteer and depend on your participation to sustain our efforts!