by Takver - Climate IMC
An international study led by CSIRO oceanographer Dr Wenju Cai has identified that global warming is causing shifts in the rain band of the South Pacific Convergence Zone causing an increase in extreme weather across the island nation states of the South Pacific. The result of the movement causes drought and higher prevalence of forest fire in some areas while other islands experience extreme floods and increased frequency of tropical cyclones. 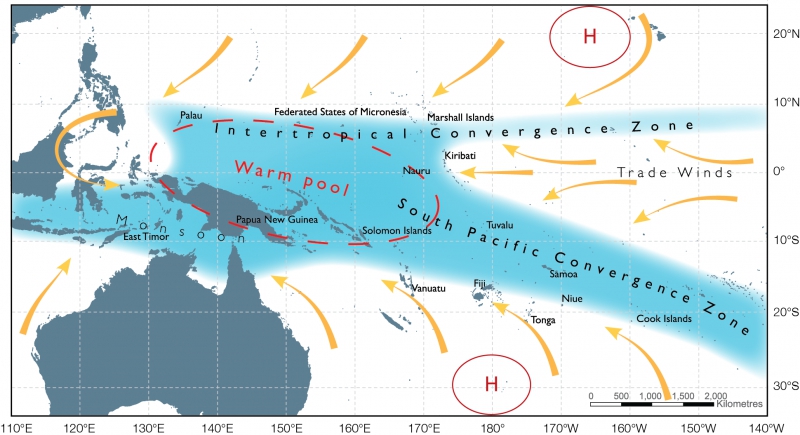 "Due to its strong rainfall gradient, a small displacement in the [South Pacific Convergence Zone] SPCZ's position causes drastic changes to hydroclimatic conditions and the frequency of extreme weather events such as droughts, floods and tropical cyclones experienced by vulnerable island countries in the region." says the paper.

The South Pacific Convergence Zone is the important rainband that stretches from the equatorial western Pacific southeastward toward French Polynesia. When the rainband moves northward, extreme climate events are induced. "Here we show that greenhouse warming leads to a significant increase in the frequency of such events." say the researchers.

During moderate El Niño events with warming in the equatorial eastern Pacific, the rain band moves north-eastward by 300 kilometres. Countries located within the bands' normal position such as Vanuatu, Samoa, and the southern Cook Islands experience forest fires and droughts as well as increased frequency of tropical cyclones, whereas countries to which the rain band moves experience extreme floods.

"During extreme El Niño events, such as 1982/83 and 1997/98, the band moved northward by up to 1000 kilometres. The shift brings more severe extremes, including cyclones to regions such as French Polynesia that are not accustomed to such events," said Dr Cai, a scientist at the Wealth from Oceans Flagship of Australia's Commonwealth Scientific Industrial Research Organisation (CSIRO).

The study investigated how the frequency of such movement may change in the future, and projected the frequency will almost double in the next 100 years, with a corresponding intensification of the rain band.

The researchers investigated the extensive archives of general circulation models submitted for the fourth and fifth IPCC Assessments and found that increases in greenhouse gases are projected to enhance equatorial Pacific warming. In turn, and in spite of disagreement about the future of El Niño events, this warming leads to the increased frequency of extreme excursions of the rain band.

As well as the socio-economic impact of extreme weather events on human infrastructure, agriculture, mortality and food shortages in the region, the authors also identify environmental consequences such as, "the associated environmental changes affect fisheries and cause coral reef mortality through thermally-induced coral bleaching across the South Pacific."

"The impacts from these zonal SPCZ events are much more severe than those from weaker El Niño events, and include massive drought and food shortage, unprecedented coral bleaching-induced mortality and cyclogenesis in the vicinity of French Polynesia, a region not accustomed to such occurrences." say the researchers in the paper.

The study involved extensive modelling of zonal wind and rainfall composite patterns to understand the relationship between the South Pacific Convergence Zone and Sea Surface Temperature (SST) anomalies. Modelling SSTs the researchers found that climate change induces a larger warming rate along the equator than in the off-equatorial central Pacific.

With a warming atmosphere and ocean, predicting the likelihood, intensity and frequency of extreme weather events is a central issue for community adaptation in Australia and across the Pacific. This allows risk and disaster management plans to be drawn up to manage the impact and destruction from extreme weather disasters and to recover from them more efficiently.

"Understanding changes in the frequency of these events as the climate changes proceed is therefore of broad scientific and socio-economic interest." said Dr Cai

The paper was published in Nature during August 2012 - More extreme swings of the South Pacific Convergence Zone due to greenhouse warming (Full paper - PDF). It was co-authored by Australian scientists Dr Simon Borlace, Mr Tim Cowan from CSIRO and Drs Scott Power and Jo Brown, two Bureau of Meteorology scientists at the Centre for Australian Weather and Climate Research, who were joined by French, US, UK, and Cook Island scientists.

The authors warn on page 7, "In summary, increased occurrences of zonal SPCZ events are consistent with the background state change in SST, and support our conclusion of an association with human-induced global warming. The increase is generated despite a lack of consensus on a definitive response of ENSO to greenhouse warming. With this increase, we expect more frequent occurrences of extreme events such as droughts, floods, and tropical cyclones in the Pacific Island nations most affected by zonal SPCZ events."