Add an Event
Newswire
Calendar
Features
Home
Donate
From the Open-Publishing Calendar
From the Open-Publishing Newswire
Indybay Feature
Publish to Newswire
Add an Event
Related Categories: International | Animal Liberation | Environment & Forest Defense
Costa Rica Wants Me, But I Won't Be Available - Paul Watson
by indyradio.nu
Monday Jul 30th, 2012 7:52 PM
Costa Rica recently put in a bid to extradite Paul Watson for charges stemming from his actions in defense of sharks a decade ago. Although Paul won't be available for any of the recent inquisitions launched worldwide, he shared his thoughts with the Costa Rican Star. Says Paul, "the Obama Administration is ready to compromise with the whaling nations to let them kill more whales. No President since Ronald Reagan has betrayed the whales more than this one. ... we will speak the one language that the whalers understand – money. We intend to sink the Japanese whalers economically and we intend to save the lives of as many whales as we possibly can." 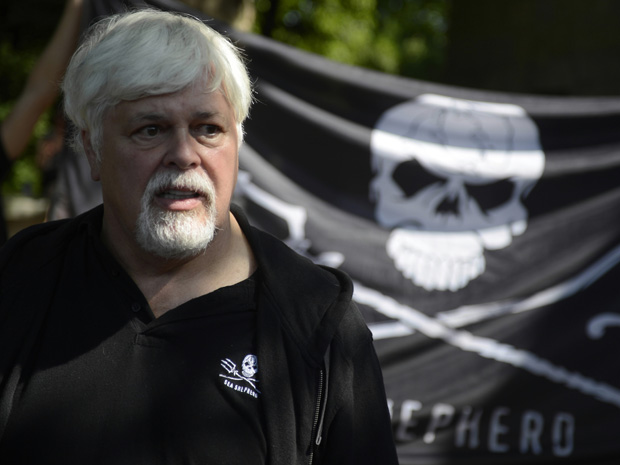 Costa Rica recently put in a bid to extradite Paul Watson for charges stemming from his actions in defense of sharks a decade ago. Although Paul won't be available for any of the recent inquisitions launched worldwide, he shared his thoughts with the Costa Rican Star.

(Santa Ana 07-06) I have an excuse for not attending the current meeting of the International Whaling Commission. Germany is not allowing me to leave their wonderful nation because Costa Rica wants me extradited for the horrendous “crime” of saving sharks a decade ago.

I don’t think I will be missing much other than the satisfaction of terrifying the Japanese delegates who tend to grow frightfully pale when they see me at this annual feud between whale huggers and whale killers.

I do grow weary of the annual charade now playing out in Panama. Once again the impotent, greedy, ruthless forces of anthropocentrism and anthrocultural imperialism gather to sit in judgment of the magnificent minds in our oceans.

Once again the whales are to be assaulted and insulted by these obnoxious primates in silly suits who strive to arrogantly lay waste to the seas.

The International Whaling Commission is a complete and utter farce, a joke and an embarrassment to humanity.

The meeting opened up with gorgeous visuals of beautiful Humpbacks as everyone smiled and applauded, except for the Japanese delegates who do not seem to see beauty in the whales unless they have been butchered and served on a platter with rice and a flask of sake.

Japan and her bought-and-paid-for puppets are so hostile to the world’s whale populations that they prevented the creation of the South Atlantic Whale Sanctuary in an area where no one kills whales.

Because Japan, the same nation spewing radioactive filth and toxic debris into the seas will not give in an inch to conservationists. This is a war in the eyes of this ocean-plundering nation and they will see the seas destroyed before surrendering their power over the resources of the deep.

And the vicious, law-breaking Viking nations of Norway, Iceland and Denmark continue to spit in the face of IWC regulations, knowing full well that the IWC is a toothless, useless and clueless body of weak-kneed, petty bureaucrats and self-interested politicians.

And when it comes to so-called aboriginal whaling, the delegates prostrate themselves on the floor and lick the feet of anyone who claims cultural superiority over the whales.

This even includes the ridiculously pseudo-aboriginal demands by St. Vincent and Grenadines to kill nursing mother Humpbacks and their calves. This “aboriginal” farce goes all the way back to 1875 when a group of non-natives decided to get into the whaling business. These are not Carib Indians (Yes, the real aboriginal peoples are extinct). These whalers are black and justify their ruthlessness under the banner of antiquated slavery, something none of them ever suffered themselves of course.

There is only one way to save the whales from the relentless desire by Japan to pursue and slaughter these gentle giants.

We have demonstrated that it can be done.

Yet Greenpeace ships stay away from the whaling fleets and promote the silliness of making origami whales, signing petitions, hanging banners and playing kissy face with the Japanese whalers as the slaughter goes on and on, as it has for decades with nothing to show for it except for the lives that we save with every direct-action campaign.

The Obama Administration makes the George Bush administration look like a bunch of whale huggers. “W” may have done many things that many people did not like (like start a few wars and such) but he never sold out the whales and he created the largest marine sanctuary in the world. Barack has given the whales nothing but broken promises.

In an effort to ensure that American Inuit get to continue to murder Bowhead whales, the Obama Administration is ready to compromise with the whaling nations to let them kill more whales. No President since Ronald Reagan has betrayed the whales more than this one.

The Australian Labor government has stepped back from their election promises to await a decision from the World Court in their complaint about Japanese whaling. We can be sure that whatever the judgment, it will make no difference, for Japan will simply ignore and will do whatever Japan wishes to do and that usually involves killing something that most other people in the world would rather see kept alive.

The Japanese will once again waste everyone’s time with their Safety at Sea ramblings and will most likely get another vote of condemnation of the Sea Shepherd Conservation Society for violently allowing one of our boats to be cut in half and exposing ourselves to their concussion grenades, LRADs, spears, projectiles and bullets.

Not that it matters, everyone ignores the rulings and the proclamations of the IWC especially the Japanese and their Viking bedmates.

These are highly intelligent, socially complex, self aware, sensitive, sentient beings and the continued murders and capture of cetacean hostages and subjugation of them into forced objects of entertainment for humans is a shameful indictment of humankind.

Just like the Rio summit a few weeks ago this IWC meeting will accomplish nothing. Once again it is simply a waste of time.

For those who are truly interested in defending the whales I urge you to back our ships and our courageous crew of passionate volunteers. Help us block the killers where they kill, in the remote waters of the Southern Ocean Whale Sanctuary, on the beaches of the Faeroe Islands, in the North Atlantic and every other place where the hot blood of the whales and the dolphins flows freely into sea because of the murderous nature of our fellow humans.

Once again our ships will return to the Southern Ocean in December and once again we will speak the one language that the whalers understand – money.

Once again we will negate their blood profits as we drive them ever further into debt.

We intend to sink the Japanese whalers economically and we intend to save the lives of as many whales as we possibly can.

Sea Shepherd volunteers do not do meetings very well. We tend to get in the face of the whalers with action not words.

Operation Zero Tolerance coming soon to a Whale Sanctuary not near you.  “Save the Whales” is not a slogan to us; it’s a promise and a commitment.

Join us to design the new radio - the future is ours.

http://blogs.indyradio.nu/content/costa-ri...
Add Your Comments
Support Independent Media
We are 100% volunteer and depend on your participation to sustain our efforts!