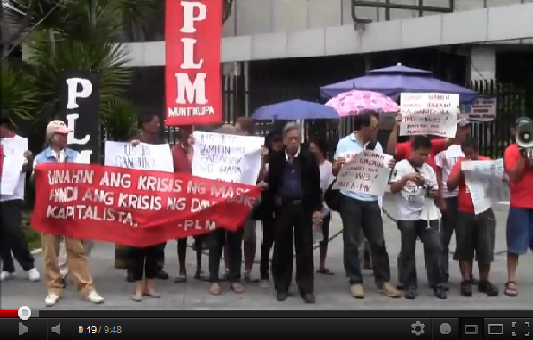 Labor groups under the coalition Nagkaisa, including PM, discussed the “state of labor” in a whole-day forum at the Amoranto Stadium in Quezon City. More than 40 different workers groups comprise Nagkaisa which held a massive 20,000-strong rally last May 1 in Mendiola to banner its advocacy for a wage hike and regular jobs.

On Monday, PM, PALEA and Nagkaisa will mobilize several thousand workers in a counter-SONA rally in Quezon City. The labor rally will merge with a multisectoral mobilization of other groups such as the Kampanya para sa Makataong Pamumuhay (KAMP), Freedom from Debt Coalition (FDC) and human rights organizations.

Magtubo gave a presentation to the forum on the “miserable condition of workers and the poor despite the much vaunted increases in GNP and so-called inclusive growth.” He insisted that “From 2003-2009 the economy grew by an average of 4.8% but the number of poor Filipinos increased from 19.8 million to 23.1 million. Among the ASEAN nations, the Philippines have the most persistent incidence of poverty (defined as living on less than US$1.25 a day). The Philippines has the highest percentage of slum population as a percent of its urban population among six Asian countries.”

Meanwhile on the eve of the SONA, hundreds of urban poor residents of Bagong silang in Caloocan will join a funeral march to highlight the demand for quality public health care for all. A local PM youth leader in Caloocan named Andy Calipos died last week of leukemia but the disease remained undiagnosed and untreated despite being confined for two weeks at the Tala Hospital in Caloocan.

“PNoy’s SONA may mention Dolphy’s death but it will not give even a single word to the passing of Andy. Yet Andy’s plight reflects the suffering of millions of Filipinos under a deteriorating public health system due to cost-cutting and privatization,” Magtubo explained. Tomorrow the PM chapter in Caloocan will hold a “Luksang Parangal” for Calipos in Munting Nayon Phase 3 in Bagong Silang. A delegation from Bagong Silang will also participate in the counter- SONA rally to press for universal health coverage.

By Party of the Laboring Masses (PLM)

NO PHILIPPINE PRESIDENT has admitted on Sona that his or her performance in office is dismal and wanting. Every one of them has painted a glowing scenario of the economy attributed to positive policies of their administrations.

On Sona, President Benigno Aquino III (P-Noy) is set to report that the “inclusive growth” strategy under his administration’s Philippine Development Plan of 2011-2016 is now bearing fruits. But is this really the case?

Inclusive growth is defined as rapid and sustained economic growth that creates jobs and reduces mass poverty. P-Noy is boasting that the Gross Domestic Product growth has reached 6% this year (despite the IMF saying that it’s only around 4.8%). Granting that this is true – is this “growth” beneficial to the masses? Does it really represent “inclusive growth”?

In truth, the increase in GDP is one more sign of exclusive – not inclusive – growth. The number of Filipino billionaires has increased to 40 this year, but there has been increasing number of Filipinos living below the poverty line (with income of less P100 per day). In fact, the number of poor people has reached more than 23.1 million compared to around 19.8 million in 2003. It means that only an exclusive enclave of the elite – the corporate and landed clans – have benefited in the GDP growth.

The P-Noy government is pursuing the same neoliberal policies and program that have been implemented by previous governments, including his worst nemesis Gloria Macapagal-Arroyo. The strategy for the 6-year economic development plan by the P-Noy government consists of:

(1) privatization of more state resources including power, energy, road development and repairs, hospitals, and others,

(2) continuation of the labor-export policy to increase employment, coupled with low-skilled service jobs needed by small local private enterprises, and

(3) further liberalization and deregulation of the economy to allow full entry of foreign investments, especially mining firms (already, there is talk of Chacha or changing the constitution to get rid of provisions protecting the local economy).

Human development is supposedly an aspect of P-Noy’s development plan. But it merely rattles on implementing basic education reforms, i.e., the K+12 plan, which the poor resists because it adds two more years to the schooling of their children, an additional cost they could not afford. There is talk of basic health care which remains a pipe dream for all since PhilHealth is set to raise its members’ contribution funds anytime this year.

For poverty alleviation, the P-Noy government merely focuses on distributing conditional cash transfer (CCT) funds to more poor family-beneficiaries. But the CCT program is already funded by commercial loans that the government needs to pay in the coming years. This type of poverty alleviation is momentary and is doomed to increase the country’s poverty levels during pay-up time with the banks.

The claim of “inclusive growth” is therefore a big lie. So is the claim that the P-Noy government has done much to improve the political situation of the country.

P-Noy got rid of the Supreme Court’s chief justice, but only with the aim to replace him with his own man. He was able to put Gloria Arroyo into hospital arrest, but even this feat is comparable only to Arroyo herself putting Erap under jail during her time. Nowhere have these acts been translated to an improved economic situation of the masses; this despite the regime’s slogan, kung walang korap, walang mahirap. The hard truth is that P-Noy should jail more government bureaucrats and corrupt businessmen, and divest them of ill-gotten wealth that can then be distributed to the masses, if he wants to be true to his slogan.

And what about the political killings that have gone unabated during his term? P-Noy has not even managed to prosecute the activists’ butcher (Gen. Jovito Palparan) and the killers of journalists, priests and environmental advocates since he took office. The record of killings and human rights violations continue to soar under his dispensation.

There are many issues that the regime needs to address insistently and immediately to ease the burden of the poor. These include a moratorium on demolition of urban poor communities, full employment program, the reproductive health rights especially of poor women, the fast-tracking of the distribution of lands under the extended agrarian reform program, the lowering of prices of electricity (the highest in Asia), to name a few. The President’s inaction on these issues has earned it the monicker “Noynoying”, but P-Noy brushes this aside as mere gimmicky comment from youth activists.

But a regime that is not even ready to shake things up in order to better the situation of the country is a useless regime. And a regime that is merely implementing the disastrous programs of the old ones is a devious one. There will be no inclusive growth and political reforms that will emanate from it.

We call on the people to discard any illusion on the regime’s will to institute reforms. The people should continue to struggle for their rights. Social justice for the poor can only be possible through their concerted actions. The elite has nothing to offer to the poor except further deprivation and oppression.