Add an Event
Newswire
Calendar
Features
Home
Donate
From the Open-Publishing Calendar
From the Open-Publishing Newswire
Indybay Feature
Publish to Newswire
Add an Event
Related Categories: Peninsula | Health, Housing & Public Services | Police State & Prisons
No More Prisons--Protest in San Mateo County Pt I
by R. Robertson
Sunday Jul 15th, 2012 11:23 PM
Saturday's protest at the site of new prison building was held on Bastille Day, a day that commemorates the storming of the Bastille fortress-prison in France in 1798. On July 14th, Occupy Redwood City members took their protest to the jail site because it has become alarmingly clear that the Board of Supervisors approved the prison expansion without considering the opinions expressed by community members. Occupy Redwood City, joined by Occupy San Jose and Occupy Palo Alto, called out the Supervisors for not using budget money for programs that help keep people out of jail. ORWC is joined in their concern by CURB (Californians United for a Responsible Budget--Against Prison Spending), YUCA (Youth United for Community Action), the group Legal Services for Prisoners, and ACLU Northern California, amongst others.

The San Mateo County Sheriff’s Department held a groundbreaking ceremony on July 10th at the site of a new prison. Occupy Redwood City was quick to respond with a protest on Saturday July 14th, Bastille Day, rallying with a coalition of groups united in their commitment against an increase in prison building.

Bastille Day commemorates the storming of the Bastille fortress-prison and in France in 1798. Occupy members said they took their protest to the jail site because it has become alarmingly clear that the Board of Supervisors approved the prison expansion without considering the opinions expressed by community members.

Former Assembly candidate Joseph Rosas of Occupy San Jose spoke at the rally about San Mateo County's practice of referring juveniles to ICE for potential transfer to detention centers and then deportation. Rosas said that San Mateo County is one of the worst offenders in the nation when it comes to referring juveniles to ICE, something that they are not required to do under law. Rosas said the county's culture of incarceration is extreme, and runs so deep that it extends to the deportation of minors, as well as the building of new jails.
§No More Prisons--Protest in San Mateo County Pt II
by R. Robertson Tuesday Jul 17th, 2012 12:41 AM 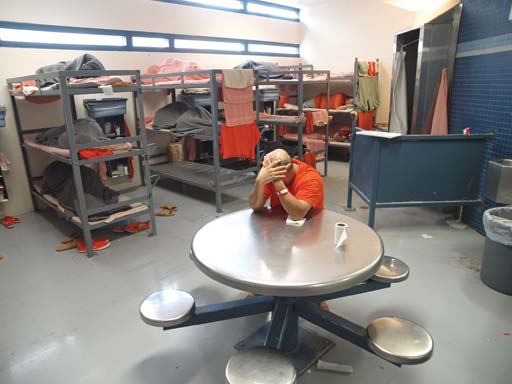 The San Mateo County Sheriff’s Department held a groundbreaking ceremony one week ago today at the site of a new prison. Occupy Redwood City (ORWC) was quick to respond with a protest, rallying with a coalition of groups to say "No More Prisons!"
Part I of this article is here: http://www.indybay.org/newsitems/2012/07/15/18717590.php

At a rally on Saturday in front of a new prison site, directly across the street from the Redwood City police department, many spoke of the need to halt the building of prisons. Dorsey Nunn of Legal Services for Prisoners with Children said how happy he was that Occupiers were joining the cause and added that more cost-efficient and just alternatives would provide greater long-term benefits for all.

James Lee of Occupy Redwood City (ORWC) spoke out as a former public employee and union member. He said it was a shame that the San Mateo County Labor Council was pushing for this jail. He added that while the jail would provide building and trades unions with a few years of construction jobs, the operating expenses of the jail would drain the county of further resources, leading to the loss of good public sector jobs.

Occupy Redwood City issued a statement saying that our prison system is both a moral blight on our society and an overwhelming economic burden, taking away much needed resources from schools, health care, and affordable housing. ORWC stands with the many groups in solidarity on this issue, including YUCA (Youth United for Community Action), ACLU Northern California, and CJCJ (Center for Juvenile and Criminal Justice), amongst others.