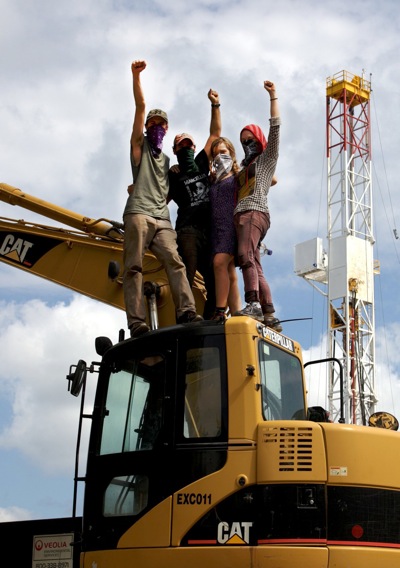 Following their annual week-long Round River Rendezvous, occurring this year in Pennsylvania’s Allegheny National Forest, Earth First! activists from across the United States successfully shut down a hydraulic fracturing site in the nearby Moshannon State Forest. The action on Sunday, July 8, marked the first time protesters have managed to shut down a hydrofracking site in the U.S. The blockade is part of an escalating direct action campaign in Pennsylvania, led by groups like Marcellus Earth First! and Occupy Well Street, who are targeting the so-called “fracking” industry. The campaign most recently included the 12-day blockade from June 1 to June 13 of the Riverdale Mobile Home Park in Jersey Shore, Pa., by residents and activists.

Roughly 100 people disrupted work on the fracking site by blocking the only access road to the location with tree-sitters, who stopped all traffic on the road by stringing anchor ropes across the length of it; any vehicle coming through the anchor lines would have put the lives of the tree-sitters at risk. They were defended on the north and south by piles of logs and debris, forming barricades that stretched for a mile and a half. About an hour into the blockade, workers on the site were approached by 20 or so activists, who informed them that the site was closed to vehicular traffic indefinitely. They offered to safely escort workers across the barricades on foot, or on rented ATVs, and assured them that their target was the fracking industry, not the workers. After confirming that the site and its 70-foot tall drill rig were indeed shut down for the day, the Earth First!ers headed back to the road to reinforce their blockades.

Most of the blockades were fortified to be about four feet tall and stretch across the entire road. Shifts were set up to watch them, and individuals or affinity groups took on roles like worker and police liaisons, media, communications, medics, water and food runners, and legal observers. Locals stopped by throughout day, expressing their support for the action against the fracking industry and walking around the barricaded roadway, mingling with activists.

As nightfall approached, police began to move in. Bulldozers cleared out the barricades leading from the road’s entrance to the locations where the tree sitters were camped out. One activist, who had U-locked their neck to an anchor line strung across the road to protect a tree-sitter, was sliced out with bolt cutters and arrested. After carelessly slashing safety lines away from the person in a hammock 50 feet up between the trees, putting their life in imminent danger, the police snatched them with a fire department hook-and-ladder truck. After determining that the truck could not reach the second tree-sitter, they sliced all the safety lines, leaving the sitter hostage 70 feet up in the sky, and then left the location. The second tree-sitter, however, had hidden an extra rope inside a bucket in the tree, and was able to climb down and escape without arrest once the officers had left. By the end of the day, Earth First! had contributed its direct-action muscle to the growing momentum of a local campaign and showed the fracking industry what to expect in the future if it keeps tearing Pennsylvania communities apart.

Hydraulic fracturing is a process in which pressurized fluid is blasted into a shale, forcing it to release natural gas. The process results in forest fragmentation, contamination of groundwater and risks to air quality. While fracking is a relativity new process, people living near extraction sites or compressor stations have reported various neurological and respiratory effects such as asthma, arsenic poisoning, cancer and more. Some report being able to light their drinking water on fire due to contamination. Gas companies, however, have thus far not been forced to release information detailing the exact nature of the mixture of toxic chemicals used in the process.

Earth First! is a radical environmental direct action movement founded in 1980. It currently operates under anarchist principles, making decisions by consensus and organizing non-hierarchically. Autonomous EF! groups can be formed anywhere in the world by activists who identify with these principles, and with Earth First!’s slogan “No Compromise in Defense of Mother Earth!” Earth First! members have employed such tactics as tree sits, road blockades, tripods, and locking themselves to or otherwise disrupting heavy machinery. These tactics have often won them major victories, most recently by Humboldt Earth First! in California, where 2,000 acres of forest in the McKay Tract were saved after a four-year tree-sitting campaign.

Earth First!’s annual meet-up is a weeklong series of workshops, skillshares, performances and relationship-building that occurs in a different part of the country every year, designed to contribute to a local direct action campaign. This year’s rendezvous attracted a harmonious mixture of urban and rural activists. The potential for growth, sharing and solidarity between urban and rural activism was palpable throughout the week.

Experienced rural activists set up a training center open all week to help teach tactics like climbing and tree-sits. There were courses on constructing and implementing tripods and bipods, which are temporary structures that leave activists towering above the ground and prevent vehicular passage underneath them, and hard locks, in which activists use equipment to attach their bodies to things like heavy machinery, road intersections or entrances to corporate buildings. A course on “Diesel Mechanics in Case of Zombie Apocalypse” was particularly well-attended. Imagine a person or two in an 80-foot tall tripod blocking vehicular traffic on Broadway in New York City, and it becomes clear how these tactics could be well-applied to urban settings as well as rural ones.

The urban activists, in turn, shared their experience with anti-oppression work. Unlearning internalized oppressions like racism, sexism, transphobia, homophobia, ageism and the like has long been a focus of the urban anarchist movement. This year’s Earth First! rendezvous placed a clear priority on the work of challenging patriarchy. There were two “Female-Identified, Queer and Trans Listening Circles,” designed to create a safe space for systemically-marginalized folks to discuss their experiences. There were two “Fighting Male Supremacy” workshops attended by about 50 people who identified as males, and who discussed the role patriarchy plays in their lives, and how to challenge male supremacy in all its forms. Additionally, one of the best-attended workshops of the weekend was called “Challenging Racism in our Movements.” The next issue of the Earth First! Journal will be focused on anti-oppression work in the movement and society at large.

Bringing the Earth First! Rendezvous to Pennsylvania will give a boost to the campaigns of local direct action groups working to end hydrofracking in the Marcellus Shale region. It put the fracking industry on notice with the first successful fracking site shutdown in the United States, with many more to come. Also, many urban activists are now trained in advanced civil disobedience tactics that their rural counterparts have developed, and which can now spread and be applied in new contexts. The growing strength and momentum of the anti-fracking movement, coupled with remarkable solidarity and synergy between urban and rural activism, provide further evidence that a wave of resistance is sweeping the United States and the world.
http://wagingnonviolence.org/2012/07/frack...
Add Your Comments
Support Independent Media
We are 100% volunteer and depend on your participation to sustain our efforts!