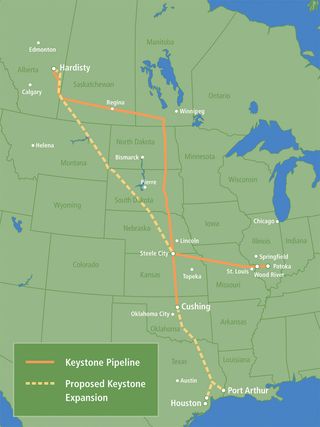 After rejecting the controversial Keystone XL pipeline proposal in January, President Barack Obama today announced his plan to fast- track the construction of the pipeline's southern end at a speech in Cushing, Oklahoma.

As Native American activists protested the pipeline on the motorcade route miles from the President’s pro-oil event, Obama explained that the TransCanada company has applied to build a new pipeline to "speed more oil" from Cushing to state-of-the-art refineries down on the Gulf Coast.

"And today, I'm directing my administration to cut through the red tape, break through the bureaucratic hurdles, and make this project a priority, to go ahead and get it done," said Obama.

Ironically, Obama announced his plan on March 22, International World Water Day. The day is commemorated annually as a means of focusing attention on the importance of freshwater and advocating for the sustainable management of freshwater resources.

In his remarks, Obama claimed that, America is "producing more oil today than at any time in the last eight years," and portrayed the pipeline as a necessary project to distribute the oil in the quest for "energy independence."

"Over the last three years, I’ve directed my administration to open up millions of acres for gas and oil exploration across 23 different states," he said. "We’re opening up more than 75 percent of our potential oil resources offshore. We’ve quadrupled the number of operating rigs to a record high. We’ve added enough new oil and gas pipeline to encircle the Earth and then some."

"So we are drilling all over the place -- right now. That’s not the challenge. That's not the problem. In fact, the problem in a place like Cushing is that we’re actually producing so much oil and gas in places like North Dakota and Colorado that we don’t have enough pipeline capacity to transport all of it to where it needs to go -- both to refineries, and then, eventually, all across the country and around the world," he said.

"There’s a bottleneck right here because we can’t get enough of the oil to our refineries fast enough. And if we could, then we would be able to increase our oil supplies at a time when they're needed as much as possible," he continued.

Obama also indicated that he was not opposed to the construction of the northern portion of the pipeline, but wanted it to undergo more environmental review.

"The northern portion of it we're going to have to review properly to make sure that the health and safety of the American people are protected. That’s common sense," Obama proclaimed.

As Obama spoke before oil industry officials, Native Americans gathered in Cushing for a Thursday protest of President Obama’s speech. Although local authorities at first indicated that the protesters would be forced to hold their event in a "cage" erected in Memorial Park - a tactic that has has been used frequently by federal, state and local authorities in recent to suppress the First Amendment - they backed down and allowed them to protest on the motorcade route.

According to a news release from the Indigenous Environmental Network, the President visited Cushing "to stand with executives from TransCanada and throw his support behind a plan to build the southern half of the controversial Keystone XL pipeline to move tar sands bitumen and crude oil from Cushing to the Gulf Coast refineries in Texas."

“A lot of tribal councils and Indian businesses struggle to find a balance between economic resources and our inherited responsibilities for the earth,” said Indian actor and activist Richard Ray Whitman. “How will the decisions we make now effect coming generations?”

“President Obama is an adopted member of the Crow Tribe, so his fast-tracking a project that will desecrate known sacred sites and artifacts is a real betrayal and disappointment for his Native relatives everywhere,” said Marty Cobenais of the Indigenous Environmental Network. “Tar sands is devastating First Nations communities in Canada already and now they want to bring that environmental, health, and social devastation to US tribes.”

A major concern for Native Americans in Oklahoma, according to spokespeople at the event, is that Keystone XL and the Canadian tar sands mines that would supply it ignore impacts to indigenous communities and their sacred spaces.

“Natives in Canada live downstream from toxic tar sands mines,” said Earl Hatley, “and they are experiencing spikes in colon, liver, blood and rare bile-duct cancers which the Canadian government and oil companies simply ignore. And now they want to pipe these tar sands through the heart of Indian country, bulldozing grave sites and ripping out our heritage.”

The group points to a survey done by the Oklahoma Archeological Survey which found 88 archaeological sites and 34 historic structures that were threatened by Keystone XL. TransCanada was asked to reroute around only a small portion of these, leaving 71 archaeological sites and 22 historic structures at risk. The group says they have asked for a list of these sites and to oversee operations that might threaten sacred burial grounds, but neither request has been honored.

Beyond the threat to their own cultural heritage, the group voiced opposition to the pipeline’s environmental impacts, including its threat to drinking water supplies.

“The Ogallala Aquifer is not the only source of water in the plains,” said RoseMary Crawford, Project Manager of the Center for Energy Matters. “Tar sands pipelines have a terrible safety record and leaks are inevitable.”

“We can’t stop global warming with more fossil fuel pipelines,” emphasized Crawford. “The people who voted for this President did so believing he would help us address the global environmental catastrophe that our pollution is creating. He said he would free us from ‘the tyranny of oil.’ Today that campaign promise is being trampled to boost the President’s poll numbers.”

For more information, go to: http://www.ienearth.org/news/native-americans-protest-keystone-xl-from-a-cage.html. .

While President Obama was wooing oil industry officials in Oklahoma, Governor Jerry Brown has conducted a similar love affair with big oil in California. In spite of the protests by environmentalists and fishermen, Brown has continued the oil lobbyist-overseen Marine Life Protection Act (MLPA) Initiative to imposed so-called "marine protected areas" on the California coast.

On January 1, a network of "marine protected areas," created under the leadership of a big oil lobbyist, went into effect on the Southern California coast. Catherine Reheis-Boyd, the President of the Western States Petroleum Association and a huge supporter of the Keystone XL Pipeline, offshore oil drilling and the weakening of environmental laws, chaired the Marine Life Protection Act Blue Ribbon Task Force that created the "marine protected areas."

These "marine protected areas" fail to protect the ocean from oil spills or drilling, pollution, wind and wave energy projects, corporate aquaculture, military testings and all human impacts on the ocean other than fishing and gathering.

The collusion between the oil industry, MLPA Initiative and corporate “environmental” NGOs was revealed in a March 10 article in the Santa Barbara Independent (http://www.independent.com/news/2012/mar/10/coastlines-new-rules/).

The official language for a new marine protected area in the Isla Vista area of Santa Babara County reads, “Take of all living marine resources is prohibited, except for take pursuant to operation and maintenance of artificial structures inside the conservation area … ”

“The caveat, allowing marine resources to be taken near artificial structures, exists to allow oil production representatives the ability to maintain equipment, including pipelines, located in this area,” the article stated.

So the “protection” created under this glorious “Yosemite of the Sea” and “underwater park” off Isla Vista doesn’t extend to the operations of the oil industry. This evidence of the corrupt MLPA Initiative letting ocean industrialists off scott-free demonstrates that the MLPA Initiative has nothing to do with marine protection – and everything to do with corporate greenwashing of the oil industry and other ocean industrialists.

In another move that reeks of political cronyism and nepotism and demonstrates the inordinate power of the oil industry in California, Brown appointed Secretary of State Debra Bowens's husband, Mark Nechodom, to Chair California's Department of Conservation on December 28.

Nechodom, 56, replaces Derek Chernow, the acting director of the Department who Brown fired in a major environmental scandal last month. Brown fired Chernow and Elena Miller, who oversaw oil drilling operations in California, amidst claims by the oil industry and their political allies that the two officials weren't granting permits quickly and easily enough.

And guess who was backing the campaign to pressure Brown to fire state officials for actually doing their job? Yes, Catherine Reheis-Boyd.

"Oil companies are 'extremely happy' about the governor’s decision, Catherine H. Reheis-Boyd, president of the Western States Petroleum Association, a Sacramento-based trade group, said yesterday in a telephone interview," reported Bloomberg News. “They have been extremely frustrated dealing with an agency that in the past had a wonderful working relationship with industry.”

There is no doubt that both Obama and Brown are in office not to serve the public, but are there to protect the oil industry and other corporate interests that fund their campaigns.