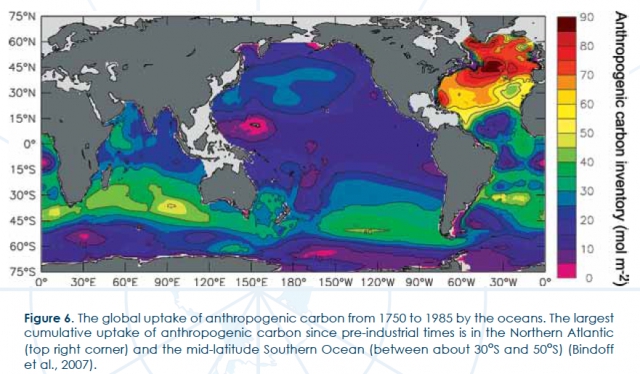 At the United Nations Framework Convention on Climate Change (UNFCCC) Durban climate talks the IUCN and Ocean Acidification Reference User Group urged that Ocean acidification should no longer remain on the periphery of the international debates on climate change and the environment and should be addressed by the UN Framework Convention on Climate Change and other global environmental conventions. At the same time ocean researchers in Australia also released a position analysis paper that the southern ocean was undergoing major changes in becoming warmer, even at great depths; more acidic; and freshening with a drop in salinity levels.

"The increasing amounts of carbon dioxide that we emit into the atmosphere every day are changing our oceans, steadily increasing their acidity, and dramatically affecting marine life," said Professor Dan Laffoley Marine Vice Chair of IUCN's World Commission on Protected Areas and Chair of RUG. "This may also have severe impacts on human life in the future. Only by reducing our CO2 emissions and enhancing the protection of oceans to strengthen their ability to recover, can we effectively address this issue. Policy makers in Durban, and in Rio in June next year, need to recognize this and take appropriate actions."

The oceans carbon sink absorbs nearly a third of all the CO2 emissions each year. In doing so the oceans have become about 30 per cent more acidic. The problem with increasing ocean acidification is the impact this will have on the food chain, starting from the very bottom with the calcifying marine organisms such as zooplankton and phytoplankton, coral reef polyps, to larger shellfish and molluscs, and then affecting the larger predators who depend on these for food.

Scientists have warned that Extinction threatens Coral Reefs unless CO2 is limited to 350ppm, and called for emissions slashed to save Great Barrier Reef.

"Through its ability to absorb large amounts of CO2, the ocean plays a crucial role in moderating the rate and severity of climate change", says Dr Carol Turley from the Plymouth Marine Laboratory and the Knowledge Exchange Coordinator for the UK Ocean Acidification Research Programme, one of the partners of the Reference User Group. "But in many ways our ocean is also a victim of its own success, as this capacity jeopardizes its future health, its biodiversity and its ability to continue to provide us with food and sustainable economic development. Ocean acidification requires urgent and effective action now, before it's too late. The obvious action is to reduce CO2 emissions to the atmosphere."

According to the Ocean Acidification Reference User Group Briefing Paper (PDF) released with the IUCN Statement, the ocean carbon sink service has been estimated to represent an annual subsidy to the global economy of US$60 billion to US$400 billion per year. The major carbon polluters are now occupying our oceans driving them to a major extinction event.

In Australia, the Antarctic Climate and Ecosystems Co-operative Research Centre (ACE CRC) also launched a briefing paper with the latest scientific research on the southern ocean showing that it is becoming warmer, decreasing in salinity and becoming more acidic.

In an interview on the conversation report author Dr Rintoul described the importance of the southern ocean for climate:

The reason it can do that is because of a unique pattern of ocean currents. You can think of the Southern ocean as a window to the deep oceans [. It's the only place where deep waters rise up and reach the sea surface, and it's one of the few places where large amounts of water sink from the surface down into the interior of the ocean. It's because of those rising and sinking motions that the Southern Ocean can store lots of heat and carbon.

There are two sets of ocean currents. The largest current in the world-ocean circles around Antarctica from west to east, and that extends from the sea surface right down to the sea floor and into the ocean basin. At the same time this water is whipping around Antarctica, there's a slower but important set of flows that is moving towards Antarctica and rising towards the surface, or flowing away from Antarctica and sinking down away from the surface into the deeper ocean; we call that the overturning circulation. A lot of the critical climate aspects of the Southern Ocean have to do with the overturning circulation - how it works now and how it might change in the future. Given that the ocean plays an important role in today's climate, if the Southern Ocean were to change that might have widespread consequences for climate and not just in the Southern ocean region.

You can read the full interview with Dr Rintoul and a statement by Professor Carlos Duarte, Director of the Oceans Institute, University of Western Australia- Climate change and the acidifying, freshening, warming Southern Ocean

Changes observed by scientists include:

"The changes we have observed in the temperature, salinity, sea level and carbon concentrations in the Southern Ocean are important because they tell us how and why the climate system is changing," said ACE CRC Oceans program leader Dr Steve Rintoul. "Because the Southern Ocean affects global and regional climate in profound ways, any changes in the region potentially have widespread consequences."

According to the ACE CRC Oceans Position analysis , "Recent research shows that the circulation of warmer ocean waters beneath floating ice shelves causing thinning by basal melt could be a significant contributor to accelerated discharge of grounded ice from Antarctica, and from the west Antarctic in particular." (see Global Warming in Antarctica: Thwaites and Pine Island Glaciers accelerating, West Antarctic Ice Sheet losing mass)

There are major potential climate change feedbacks in the southern ocean, although they are still largely unquantified at this stage with more research needed. Potential feedbacks include: