Add an Event
Newswire
Calendar
Features
Home
Donate
From the Open-Publishing Calendar
From the Open-Publishing Newswire
Indybay Feature
Publish to Newswire
Add an Event
Related Categories: California | Central Valley | Environment & Forest Defense | Government & Elections
Restore the Delta benefit raises record amount for battle against canal
by Dan Bacher
Thursday Sep 1st, 2011 2:51 PM
“From Assemblymember Bill Berryhill (R-26th District) to Congressman Jerry McNerney (D-11th District), from Delta farmers and business leaders to Delta environmentalists, all who attended our benefit recognize that the proposed peripheral canal, dressed up as the Bay Delta Conservation Plan (BDCP), will deal the final deathblow to the estuary, to our local economy, and to our way of life," said Barbara Barrigan-Parrilla, Executive Director of Restore the Delta. 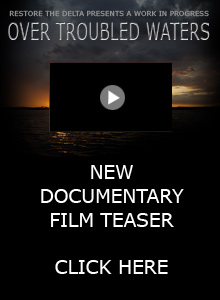 The campaign to stop the peripheral canal and restore the California Delta received an enormous financial boost at a historic fundraiser held in Stockton on August 25.

The Restore the Delta Benefit, an event hosted by Dino and Joan Cortopassi and Alex and Faye Spanos that over 600 people attended, raised over $640,000 for the organization to continue its advocacy work on behalf of Sacramento-San Joaquin Delta fisheries and communities.

“The Cortopassi/Spanos Benefit for Restore the Delta was attended by perhaps one of the most politically diverse group of Californians working together presently in the State,” said Restore the Delta Executive Director Barbara Barrigan-Parrilla. “From Assemblymember Bill Berryhill (R-26th District) to Congressman Jerry McNerney (D-11th District), from Delta farmers and business leaders to Delta environmentalists, all who attended our benefit recognize that the proposed peripheral canal, dressed up as the Bay Delta Conservation Plan (BDCP), will deal the final deathblow to the estuary, to our local economy, and to our way of life.”

As Senator Machado, now head of the Delta Protection Commission, explained, “This award is to honor Tom Zuckerman and Dino Cortopassi’s work to preserve, restore, and create a positive environmental future for the Sacramento-San Joaquin Delta.”

In his remarks to the audience, Tom Zuckerman made note of the new generation of advocates prepared to defend the Delta for the future. Dino Cortopassi elaborated on several metaphors to explain how those who seek to take water out the Delta understand only limited parts of the region, but not how the Delta works as a whole.

Cortopassi has become legendary for the strongly-worded print, radio and TV ads against the peripheral canal that he has run in numerous media outlets. He has blasted both Governor Arnold Schwarzenegger and Governor Jerry Brown for fast-tracking plans to build the canal to divert more water to agribusiness on the west side of the San Joaquin Valley and southern California.

“You’ve probably heard the story of the Delta told by people who want to reshape it to take the water and create corporate wealth in other parts of California,” stated Over Troubled Waters producer Russ Fisher. “So much of what you have heard is misleading, even wrong. That is the reason for making this documentary.”

“This event was like Restore the Delta’s debutante ball, a coming out as a coalition,” said Bill Jennings, executive director/chairman of the California Sportfishing Protection Alliance and member of the Restore the Delta Board's Executive Committee.

“At the fundraiser, the business, agricultural, environmental, fishing and recreational communities of the Delta came together to stand shoulder against the common threat of a peripheral canal,” emphasized Jennings. “We had three Congressman including George Miller, John Garamendi and Jerry McNerney, virtually all of the Stockton City Council and San Joaquin County Board of Supervisors, state legislators and numerous other elected officials at the event. That this fundraiser was put together in three weeks shows the resolve of the Delta family to fight water speculators who would kill this estuary to ship more water south.”

The Obama and Brown administrations are forging ahead with the Bay Delta Conservation Plan to build a peripheral canal to export more water from the Sacramento-San Joaquin River Delta to corporate agribusiness interests on the west side of the San Joaquin Valley and Southern California water agencies.

The agencies have agreed to a schedule for completing an effects analysis and a combined environmental impact report/environmental impact statement (EIR/EIS) as part of the BDCP by June 2012; and to "a suite of alternatives," including the peripheral canal, "for evaluation in identifying a proposed project."

Canal opponents believe that the peripheral canal's construction will likely result in the extinction of Central Valley steelhead, Sacramento River chinook salmon, Delta smelt, longfin smelt, green sturgeon and other imperiled species. The canal would take vast tracts of Delta farmland, some of the most fertile and productive on the planet, out of production to divert water to irrigate drainage impaired land on the west side of the San Joaquin Valley.

To see a clip of Open Ocean Production’s documentary work to date, endorsements, and work in progress, visit the new documentary website http://www.overtroubledwaters.org.

For more information about Restore the Delta, go to: http://www.restorethedelta.org.
Add Your Comments
Support Independent Media
We are 100% volunteer and depend on your participation to sustain our efforts!