Add an Event
Newswire
Calendar
Features
Home
Donate
From the Open-Publishing Calendar
From the Open-Publishing Newswire
Indybay Feature
Publish to Newswire
Add an Event
Related Categories: U.S. | Anti-War
Exploding the 9/11 Myth - Sifting the Evidence Interview with Kevin Ryan
by Carol Brouillet (cbrouillet [at] igc.org)
Wednesday Aug 31st, 2011 2:30 PM
Kevin Ryan will be speaking on the Community Currency Radio Show this week about "Exploding the 9/11 Myth." As a whistleblower from Underwriters Laboratories (UL), he was fired for publicly questioning UL's role in testing for the failure of the steel in the WTC, due to "fire." Since then, he has done a tremendous amount of research, written and spoken out against what he considers to be fraudulent science that has been used to cover up the crimes and the identity of the real culprits behind 9/11. 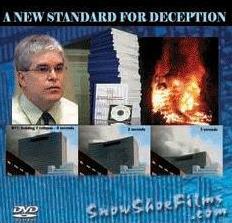 Kevin Ryan is a chemistry laboratory manager with twenty-two years of professional experience. Through his work as Site Manager for the environmental testing division of Underwriters Laboratories (UL), he began to investigate the tragedy of September 11th, 2001. Ryan was fired by UL, in 2004, for publicly asking questions about UL’s testing of the structural materials used to construct the World Trade Center (WTC) buildings as well as UL’s involvement in the WTC investigation being conducted by the National Institute of Standards and Technology (NIST).

Since 2006, Ryan has served as co-editor of the Journal of 9/11 Studies, and has been a founding member of Scholars for 9/11 Truth & Justice, the 9/11 Working Group of Bloomington, and Scientists for 9/11 Truth. He now serves as a board director at Architects and Engineers for 9/11 Truth. Kevin Ryan has co-authored several books and numerous peer-reviewed scientific articles on the subject, and has given public presentations around the country for more than five years. He continues to do research into the crimes of 9/11 in order to help the American people come to a better understanding of the events. He is on the organizing committee for the Toronto Hearings and scheduled to speak about the "Inadequacies of the Reports by the National Institute of Standards and Technology" and "Extreme Temperatures."

The Toronto Hearings, sponsored by the International Center for 9/11 Studies, will be held at Ryerson University for four days beginning on September 8th. These hearings will examine evidence for the inadequacy of the U.S. government’s investigation and will request that a full and impartial investigation be launched into the events of 9/11, which have been used to initiate military invasions and to restrict the rights of citizens. Those organizing the Toronto Hearings plan on issuing their own report, based on the independent research that has been done, primarily by citizens over the past decade, along with their analysis and critiques of the official reports. The evidence suggests that those most responsible for 9/11 were promoted, rewarded, profited from the attacks, that no one was reprimanded or held accountable, and that others were scapegoated unjustly for their alleged involvement.

The Toronto Hearings will be webcasted and streamed live at the upcoming 9/11 Reclaiming the Truth, Reclaiming Our Future events, (Northern California 9/11 Truth Alliance's Annual 9/11 Film Festival) at the Grand Lake Theater, in Oakland on September 8th, 1 - 10 pm, and at the Herbst Theatre, in San Francisco on September 11th, 1 -9:30 pm. His articles include- Active Thermitic Material Discovered in Dust from the 9/11 World Trade Center Catastrophe

Demolition Access to the WTC Towers: Part One - Tenants 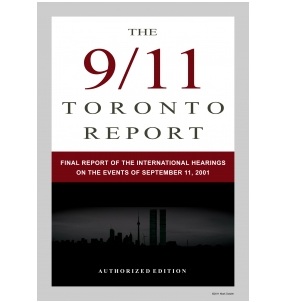 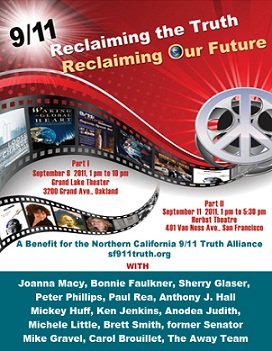 See the full schedule describing the films and speakers at- http://www.communitycurrency.org/filmfestival2011.html

http://communitycurrency.org/node/199
Add Your Comments
Support Independent Media
We are 100% volunteer and depend on your participation to sustain our efforts!