Photo: In conclusion of her 11-day mission to the United States, United Nations Independent Expert on the Human Right to Water and Sanitation Catarina de Albuquerque shared her recommendations for the government. Photo courtesy of Unitarian Universalist Service Committee. 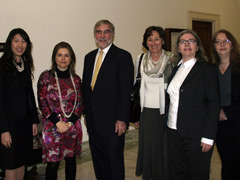 California has acquired a reputation over the years as a national "leader" in environmental policy, but this reputation proves to be false when one considers the state's often deplorable record on water, fisheries and environmental justice.

In fact, California’s failure to provide clean, safe drinking water to its residents is so alarming that it captured the attention of the United Nations in a special report released in August as a package of "human right to water" bills proceeds through the State Capitol.

Reporting on her mission to the United States last winter, Catarina de Albuquerque, the U.N. Special Rapportuer on the Human Right to Safe Drinking Water and Sanitation, cited a host of worrisome drinking water supply and sanitation conditions in California.

“Ensuring the rights to water and sanitation for all requires a paradigm shift towards new designs and approaches that promote human rights, that are affordable and that create more value in terms of public health improvements, community development, and global ecosystem protection,” de Albuquerque wrote.

While her mission and report touched on issues around the nation, the bulk of her findings addressed problems in California, specifically the San Joaquin Valley, where she cites “enormous challenges” particularly with nitrate contamination of drinking water. While occurring naturally, nitrate levels are elevated by crop fertilizers and animal manure and are known to harm respiratory and reproductive systems as well as the kidney, spleen and thyroid, according to a news release from the Unitarian Universalist Service Committee and Community Water Center in Visalia.

“Because it is difficult to assign responsibility for this type of pollution (non-point source pollution), no one is obliged to pay for the clean-up costs. In these circumstances, the affected community inevitably bears these costs,” she reported.

De Albuquerque pointed out this is especially disturbing because groundwater, which is vulnerable to nitrate contamination, serves as the primary source of drinking water for almost 90 percent of Central Valley residents. For instance, in Tulare County she reported that approximately 20 percent of the small public water systems are unable to meet the nitrate maximum contaminant level (MCL) on a regular basis and another 20 percent are over half the nitrate MCL.

“The goal of universal access to clean and safe water has yet to be attained. Infants, older persons, persons with certain medical conditions and other vulnerable groups remain at risk from exposure to water that does not meet federal standards. Moreover, hundreds of substances found in water remain unregulated, and some sources of water, namely private drinking-water supplies, are also unregulated,” she wrote.

The Community Water Center in Visalia, an advocate for safe drinking water in the Central Valley, is especially familiar with this reality.

“Hardworking farmworker families with annual incomes well below the poverty line are often forced to pay twice for water – once for a monthly water bill for water they can’t drink and then again when they are forced to seek alternative water sources, usually from neighboring towns,” said Maria Herrera, the Center’s community outreach coordinator.

The U.N. noted this disturbing reality in their report and pointed out that affected households in these small rural areas are paying as much as 20 percent of their income to water and sanitation.

“While there is no federally recognized right to safe drinking water and sanitation, individual states have taken the initiative to consecrate this right,” de Albuquerque says.

Massachusetts and Pennsylvania have a right to clean water in their constitutions and the United States joined international consensus in 2010, recognizing the human right for water and sanitation.

In California, the State Legislature is presently considering AB 685 (Eng-D Monterey Park), the Human Right to Water Measure. If passed, proponents say this would be a fundamental first step to addressing many of the recommendations and concerns in the U.N. report.

“A holistic, systemic approach is required, whereby the water sector is not viewed in isolation from the agricultural, chemical, industrial and energy sectors," de Albuquerque said. "The absence of political will inevitably means poor planning and scarce funding, and ultimately leads to pollution that jeopardizes water quality and increases costs."

"It is shocking that in California we have communities where the sole water supply is contaminated, and where families unable to afford treatment are left entirely without safe water,” said Assemblyman Mike Eng, in explaining why he authored his bill. "It is critical that we help communities throughout the state gain access to clean, affordable water.”

AB 685 was held in the Senate Appropriations Commiteee last week. This same bill with almost identical language made it all the way through the Legislature and to Governor Arnold Schwarzenegger's desk in 2009 in the form of AB 1242 (Ruskin). Schwarzenegger, bowing to pressure from corporate interests, vetoed the bill.

AB 685 is opposed by the Association of California Water Agencies (ACWA), the Western Growers Association and several other water service providers, who contend the bill "may lead to a requirement that water agencies provide water service without consideration to affordability, thereby increasing water bills and have other unintended consequences," according to the Legislative Analysis.

"Water is sacred, water is Life for all," commented Caleen Sisk-Franco, Chief and Spiritual Leader of the Winnemem Wintu Tribe. "Just as all need to breathe Air, so should be the waters be for all, not just those who market water and ruin the rest in poor planning."

The UN report was released as the Obama and Brown administrations are fast-tracking the Bay Delta Conservation Plan (BDC) to build a peripheral canal to export more water from the Sacramento-San Joaquin River Delta to corporate agribusiness interests on the west side of the San Joaquin Valley and Southern California water agencies.

Canal opponents note that the peripheral canal's construction is likely to result in the extinction of Central Valley steelhead, Sacramento River chinook salmon, Delta smelt, longfin smelt, green sturgeon and other species. The canal would take vast tracts of Delta farmland, some of the most productive on the planet, out of production to divert water to irrigate drainage impaired land on the west side of the San Joaquin Valley.

At the same time, the peripheral canal would do nothing to provide clean, safe drinking water for rural communities in the San Joaquin Valley plagued by the contamination of drinking water systems.

More than 11.5 million Californians rely on water from suppliers that experienced at least one violation of State Drinking Water Standards as reported to the Department of Public Health in 2004, according to supporters of the legislative package. As many as 8.5 million Californians rely on supplies that experienced more than five instances of unsafe levels in a single year.

The U.N. mission was coordinated by the Unitarian Universalist Service Committee (UUSC). For additional information on the U.N. mission and corresponding recommendations, contact Patricia Jones, UUSC Environmental Justice Program Manager at (617) 301 4393 or email pjones [at] uusc.org. The full U.N. report is available online at: http://www2.ohchr.org/english/bodies/hrcouncil/docs/18session/A-HRC-18-33-Add4_en.pdf.