by Dan Bacher
“So I leave you a $1,000 bill in the cereal aisle at Wal-Mart, tucked under a box of sugar coated corn flakes, does that mean that Wal-Mart actually gave you the $1,000, or maybe EDF would argue it was really a contribution from Tony the Tiger himself,” Hutchinson laughed. 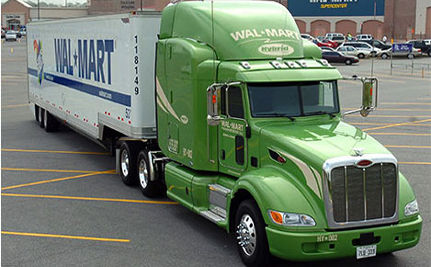 The Recreational Fishing Alliance (RFA), a national recreational fishing organization, says angler and business response to the group’s call for a nationwide Wal-Mart boycott have been overwhelming, to the point that coastal communities can expect to see some grassroots protests begin very soon outside of their local Wal-Mart corporate chain location.

Not only have recreational fishermen responded to the boycott, but so have grassroots environmental activists and commercial fishermen.

“We’ve had calls of support from both coasts, even from a few Midwest bass fishermen; our nation’s anglers are extremely agitated by the Walton Family Foundation’s actions,” said RFA executive director Jim Donofrio. “When you spend your hard-earned money on fishing tackle only to learn that the profits are being used to close down fishing access, it gets folks justifiably upset.”

Critics of Wal-Mart, the largest retailer in the world, have blasted the company for decades for being able to sell its products at cheap prices only by employing sweatshops, undercutting competitors, wielding its market power to cripple both competitors and suppliers, and flouting national and international health, safety, labor, and environmental standards. Anti-corporate globalization opponents have long regarded Wal-Mart as a virtual "Darth Vader" of retailers, as documented in the film, "The High Price of Low Cost." (http://www.youtube.com/watch?v=uJMYZwL8sPA).

While RFA said it received hundreds of positive responses literally overnight in support of the national boycott, there was opposition from at least two supporters of blanket marine reserves.

“One gentleman emailed to say he’d gladly give up fishing today so that his great-grandkids will know what a fish looks like tomorrow,” Donofrio said. "The problem of course is that these groups who want to get us off the water today don’t want us on the water tomorrow either. The real sacrifice for our future fishermen is from those who are willing to fight right now for open access while it’s under direct threat by anti-fishing efforts.”

RFA said the EDF public relations department was also quick to respond in defense of their $7,086,054 Walton Family Foundation donation.

Tom Lalley, communications director for the Oceans Program, Environmental Defense Fund, claimed, "RFA’s contention that the contribution in question was made by Wal-Mart is just wrong."

"The contribution was made by the Walton Family Fund and not Wal-Mart," he told http://www.fishnewseu.com. "These are two different entities. There is no connection between the two other than the fact that the fund’s money comes from private holdings of the same Waltons who started and managed Wal-Mart, but none of the money comes from the existing company. So it was the family, and specifically the family’s foundation, that made a contribution for sustainable fishing and ocean conservation, and not the store."

According to RFA managing director Jim Hutchinson, Jr., the marketing executives at EDF are "some of the best in the ‘astroturfing’ business," but he calls Lalley’s claims "almost comical."

“So I leave you a $1,000 bill in the cereal aisle at Wal-Mart, tucked under a box of sugar coated corn flakes, does that mean that Wal-Mart actually gave you the $1,000, or maybe EDF would argue it was really a contribution from Tony the Tiger himself,” Hutchinson laughed.

“The heirs to the corporate fortune have spent two decades successfully building back their stake in this publicly held company to the point they now own over 50% of the Wal-Mart operation. The Walton Family Foundation is Wal-Mart, and the Walton family itself is making billions in our local communities, so to say that the two are separate entities is simply ridiculous. Actually expecting us to believe that statement is borderline insanity,” Hutchinson said.

RFA is reminding anglers who are interested in organizing grassroots protests outside their local Wal-Mart store to consult with local authorities first. “We encourage peaceful protest, but every municipality has its own rules and regulations regarding active protest,” said Donofrio.

"An unholy alliance of large corporations, ocean industrialists and foundation-funded corporations such as the Environmental Defense Fund, Ocean Conservancy and NRDC are all determined to remove independent ocean food providers from the world's oceans," said Lewallen. "Real environmentalists should defend independent fishermen and seaweed harvesters and resist their deadly attack on our source of ocean food that is essential for human health."

Zeke Grader, executive director of the Pacific Coast Federation of Fishermen's Associations (PCFFA), praised the RFA for criticizing the Walton Family's contributions to ocean privatization efforts and welcomed the organization's call for a Wal-Mart boycott.

"Wal-Mart is wrong on this issue, just as it has been in the past on labor and community issues," said Grader. "The privatization of public trust resources is the antithesis of conservation."

"I've been boycotting Wal-Mart for decades and it's absolutely great that recreational and commercial fishermen are together on this," noted Grader.

RFA is reminding anglers who are interested in organizing grassroots protests outside their local Wal-Mart store to consult with local authorities first. “We encourage peaceful protest, but every municipality has its own rules and regulations regarding active protest,” said Donofrio.

“If you’re interested in picketing outside of Wal-Mart to express your anger over their support of anti-fishing efforts, call the local police department first to explain what you’re doing and be sure to keep it respectful and follow the law,” Donofrio added.

It is worth noting that Conservation International and the Nature Conservancy, the two top recipients of Walton Family Foundation funds, are known throughout the world for their top-down "environmental" programs that run roughshod over local communities to achieve their corporate greenwashing goals.

A broad coalition of commercial and recreational fishing, consumer and environmental groups is opposing the catch shares programs being pushed by NOAA Administrator Jane Lubchenco, a former vice-chair of the Board of Directors of Environmental Defense, because these programs amount to the privatization of public trust resources by concentrating fisheries in the hands of a few corporate hands. Wherever catch shares have been introduced, local fishing communities, fish populations and the environment have been devastated.

"A catch share, also known as an individual fishing quota, is a transferable voucher that gives individuals or businesses the ability to access a fixed percentage of the total authorized catch of a particular species," according to Food and Water Watch. "Fishery management systems based on catch shares turn a public resource into private property and have lead to socioeconomic and environmental problems. Contrary to arguments by catch share proponents – namely large commercial fishing interests – this management system has exacerbated unsustainable fishing practices."

“Fish are a public resource," explained Wenonah Hauter, Food & Water Watch Executive Director. "Unfortunately, private investment groups and even some public interest groups have shamelessly and publicly compared access to fish to the stock market and are treating it like an investment that can be bought and sold for personal profit. They’re aiming to model the fishing business after big agribusiness on land, with giant commercial operations controlling the market.” (http://www.fishnewseu.com/latest-news/world/6013-food-a-water-watch-launches-campaign-against-catch-shares.html)

The Marine Life Protection Act (MLPA) is a law, signed by Governor Gray Davis in 1999, designed to create a network of marine protected areas off the California Coast. However, Governor Arnold Schwarzenegger in 2004 created the privately-funded MLPA "Initiative" to "implement" the law, effectively eviscerating the MLPA.

The "marine protected areas" created under the MLPA Initiative fail to protect the ocean from oil spills and drilling, water pollution, military testing, wave and wind energy projects, corporate aquaculture and all other uses of the ocean other than fishing and gathering.

The MLPA Blue Ribbon Task Forces that oversaw the implementation of "marine protected areas" included a big oil lobbyist, marina developer, real estate executive and other individuals with numerous conflicts of interest. Catherine Reheis Boyd, the president of the Western States Petroleum Association who is pushing for new oil drilling off the California coast, served as the chair of the MLPA Blue Ribbon Task Force for the South Coast.

The MLPA Initiative operated through a controversial private/public "partnership funded by the shadowy Resources Legacy Fund Foundation. The Schwarzenegger administration, under intense criticism by grassroots environmentalists, fishermen and Tribal members, authorized the implementation of marine protected areas under the initiative through a Memorandum of Understanding (MOU) between the foundation and the California Department of Fish and Game (DFG).

MLPA and state officials refused to appoint any tribal scientists to the MLPA Science Advisory Team (SAT), in spite of the fact that the Yurok Tribe alone has a Fisheries Department with over 70 staff members during the peak fishing season, including many scientists. The MLPA Blue Ribbon Task Force also didn't include any tribal representatives until 2010 when one was finally appointed to the panel.

About the Recreational Fishing Alliance:

The Recreational Fishing Alliance is a national, grassroots political action organization representing recreational fishermen and the recreational fishing industry on marine fisheries issues. The RFA Mission is to safeguard the rights of saltwater anglers, protect marine, boat and tackle industry jobs, and ensure the long-term sustainability of our Nation's saltwater fisheries. For more information, call 888-JOIN-RFA or visit http://www.joinrfa.org.

Related Categories: California | North Coast | U.S. | Environment & Forest Defense | Government & Elections
Add Your Comments
Latest Comments
Listed below are the latest comments about this post.
These comments are submitted anonymously by website visitors.
TITLE
AUTHOR
DATE
FYI-Walmart.com
FYI-er
Support Independent Media
We are 100% volunteer and depend on your participation to sustain our efforts!