Add an Event
Newswire
Calendar
Features
Home
Donate
From the Open-Publishing Calendar
From the Open-Publishing Newswire
Indybay Feature
Publish to Newswire
Add an Event
Related Categories: California | North Coast | Environment & Forest Defense | Government & Elections
Gray whale dies in Klamath River
by Dan Bacher
Tuesday Aug 16th, 2011 11:56 AM
"To have such a large animal in our presence for so long was a great gift, but now nature has taken its course," said Yurok Tribal Chairman Thomas O'Rourke Sr. "It is truly unfortunate that she didn't try to make it back to her home." 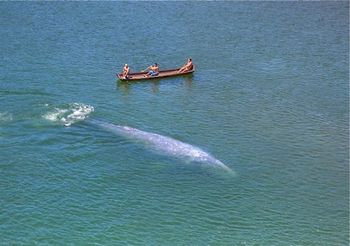 The female gray whale that drew considerable public attention by staying the greater part of this summer in the lower Klamath River died of natural causes in the early morning of Tuesday, August 16.

The 40-foot long whale beached herself around 6:30 p.m. Monday and perished at 4:19 a.m.Tuesday after spending 53 days in the river. The cetacean's health had been deteriorating in the past two days, most likely because of the lengthy stay outside of its natural, saline habitat, according to a news release from the Yurok Tribe. This is the apparently the longest time that a whale has ventured outside of its normal saltwater habitat in California waters.

"To have such a large animal in our presence for so long was a great gift, but now nature has taken its course," said Yurok Tribal Chairman Thomas O'Rourke Sr. "It is truly unfortunate that she didn't try to make it back to her home."

The last time a whale entered the Klamath River was in 1989. That whale exited the river without incident.

The whale that perished this morning entered the river with a calf on June 24. The calf, which likely weaned, returned to the ocean on July 23, but the mother stayed.

"The Yurok Tribe has assisted NOAA and Humboldt State University scientists monitor the baleen whale since it swam up the Klamath River on June 24 and will continue to aid the federal agency and the university," according to Matt Mais of the Yurok Tribe. "The group tried in several ways ranging in intensity to encourage the marine mammal to go back to the ocean with no success."

Mais said thousands of motorists took the opportunity to whale watch from the Highway 101 bridge just south of the town of Klamath where the baleen beauty spent most of her time. The rare occurrence raised awareness about gray whales in California waters.

Members of the Yurok Tribe's Fisheries Program helped facilitate the sampling of the whale's skin and breath in an effort to determine its condition during her stay, according to Mais. The team from the tribe, federal government and university also did tests to find out if there was enough food for the whale in the river and if the water was deep enough if she chose to return to the ocean.

Most gray whales migrate 10,000 miles from the arctic to Baja California. Every year, a small number of Eschrichtius Robustus don’t make the entire migration back and linger from Northern California to British Columbia. It is believed that the mother and calf were part of this small group.

"Biologists hypothesize that the mother might have brought the yearling into the river to avoid a predator such as killer whale or a great white shark," according to a statement earlier this summer by the Yurok Tribe. "The highly intelligent mammals could also simply be curious."

When a whale enters the river it is an indicator, according to Yurok culture.

“It’s a sign that things are working good,” said Yurok Elder Walt Lara Sr. “It’s a part of the world renewal structure when they come and visit us. It’s pretty touching to me. It’s something that’s supposed to happen.”

Unfortunately, the gray whale's health deteriorated after spending too much time away from its saltwater habitat and the cetacean passed away. The Yurok Tribe, NOAA and HSU are putting together a plan to remove the cetacean.

Craig Tucker, the Klamath Campaign Coordinator for the Karuk Tribe, his wife, Amy Sprowles, and his two sons, 7-year-old Carson and 4-year-old Calhoun, went to see the whale over the weekend.

"We'll really miss her," said Tucker. "It was a remarkable thing seeing her in the river. She came to the river to tell us something; we should think about the message she was trying to send us."

The Yurok Tribe's commercial salmon fishery on the Klamath River is set to start Sunday and the Yurok Tribal Council passed a plan to shut down the fishery if the whale started heading back to sea.

For more information, go to: http://yuroktribe.org/documents/whale_press_release_000.pdf