Add an Event
Newswire
Calendar
Features
Home
Donate
From the Open-Publishing Calendar
From the Open-Publishing Newswire
Indybay Feature
Publish to Newswire
Add an Event
Related Categories: East Bay | Police State & Prisons
Bay of Rage: Anticut #3 Solidarity with the Pelican Bay Strike, Oakland, 7/8/11: photos, 1 of 2
by dave id
Sunday Jul 10th, 2011 12:58 PM
On Friday, July 8th, Bay of Rage held its third Anticut demonstration, this time in solidarity with hunger strikers at Pelican Bay and across the California prison system. After a short rally at Telegraph and Broadway, a defiant march snaked its way through the streets of downtown Oakland toward the North County jail at 7th Street and Clay, where chants and speeches rang out calling for an end to the prison industrial complex and the capitalist system that necessitates incarcerating so many people. Inmates aware of the demonstration outside could be heard banging on the windows of the jail. 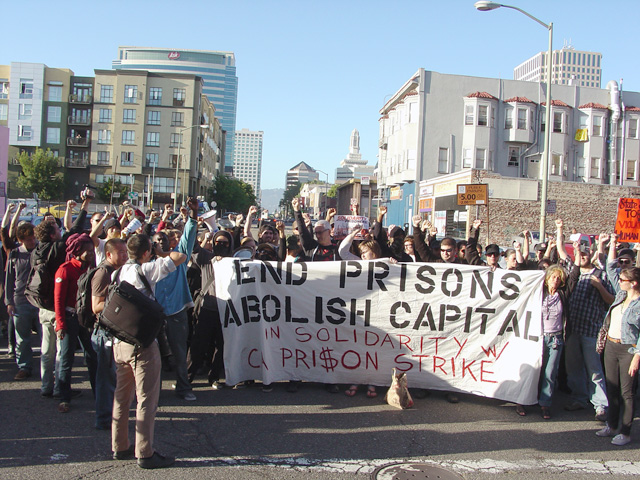 [Pictured above: Demonstrating and making noise in front of the North County jail.]


From Austerity Is Prison (Communique from Anticut 3):

Now, finally, the money is gone. The world has run out of future, used it up, wasted it on the grotesque fantasies of the rich, on technologies of death and alienation, on dead cities. Everywhere the same refrain, the same banners and headlines: there is nothing left for you. From the US to Greece, from Chile to Spain, whatever human face the State might have had: gone. The State is no longer a provider of education or care, jobs or housing. It is just a police force, a prison system, a bureaucracy with guns. . .

Sometimes, maybe, we get treated to some political theater: faked expressions of concern or outrage from the puffy, grimacing faces. But the result is always the same – in Oakland, in Sacramento, in Washington, in the offices of the IMF – whatever the owners of wealth want, they get. The rest of us are sacrificed on the altar of the bottom line.

No money on which to retire after a lifetime of crushing work. No money to go to college. No money for the grade schools and high schools, which every day look more and more like prisons. No money for the people maimed, sickened and driven insane by this unbearable society.

We could go through the new California budget line by line, but you basically already know what it contains. It’s not a budget but a bludgeon. Every line says the same thing: Fuck you. Die. 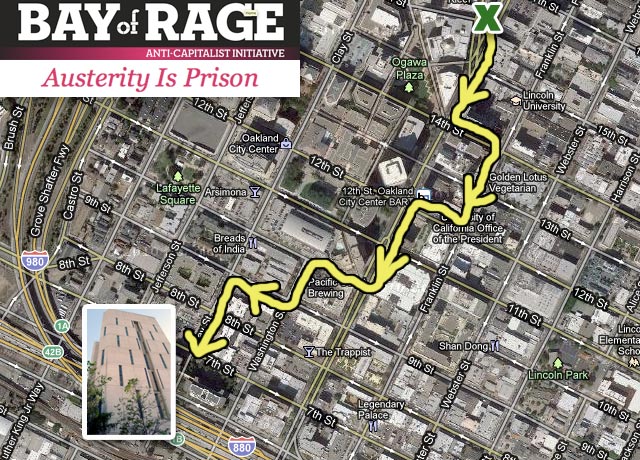 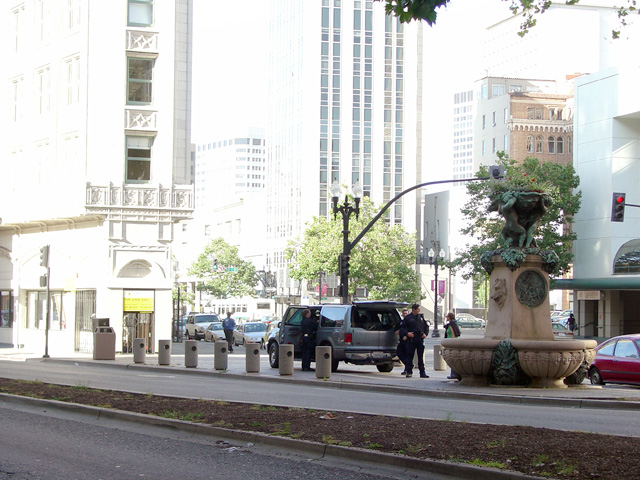 In all, over the course of the 2-hour demonstration, perhaps over 50 or more Oakland police officers -- on foot and in vehicles -- and likely over 20 cars, SUVs, and vans, mostly unmarked, tracked and confronted a group of maybe 100 people that simply spoke out, marched, chanted, and later danced against the prison industrial complex. Of course, “Fight the cops, burn the prisons! Anarchy and communism!" is not necessarily music to cops' ears.
http://indybay.org/police
§Surveillance "Ambassadors" of the Downtown Business Association amed with cameras & radios
by dave id Sunday Jul 10th, 2011 12:59 PM 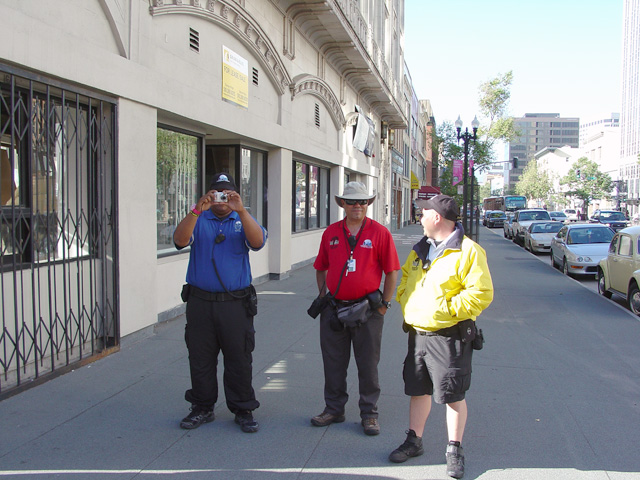 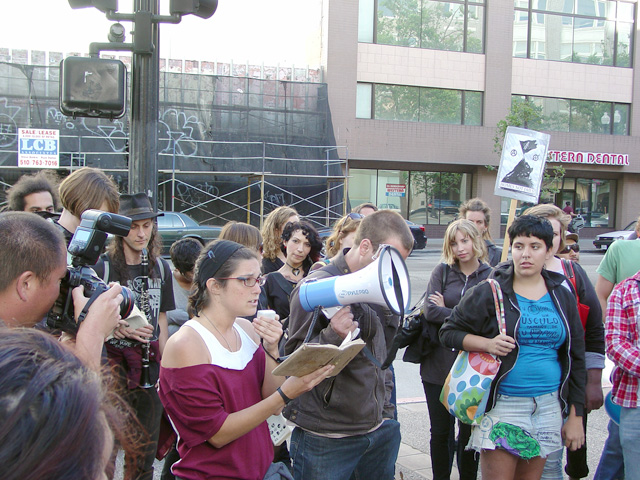 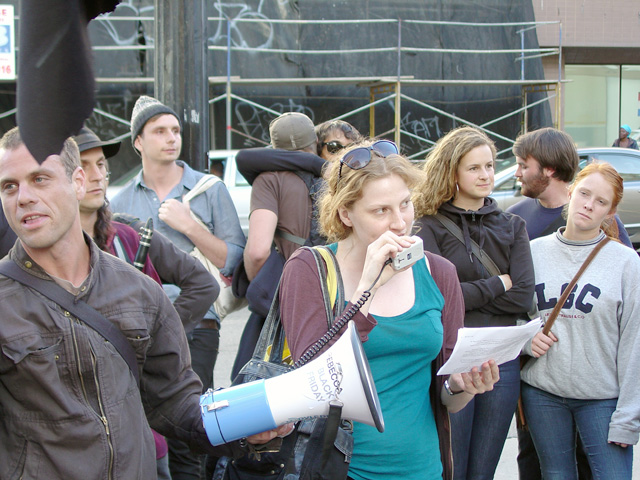 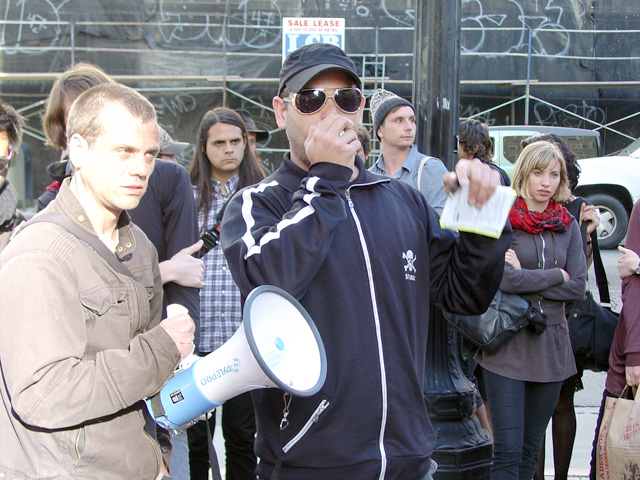 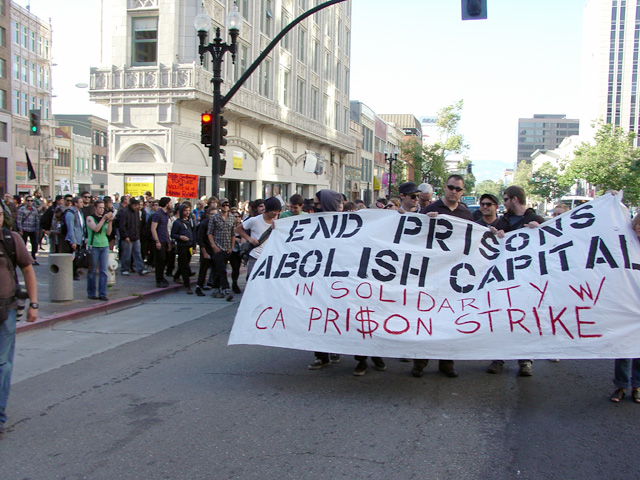 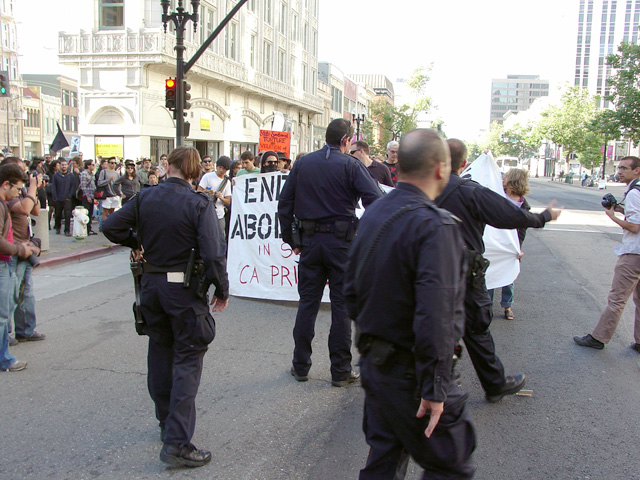 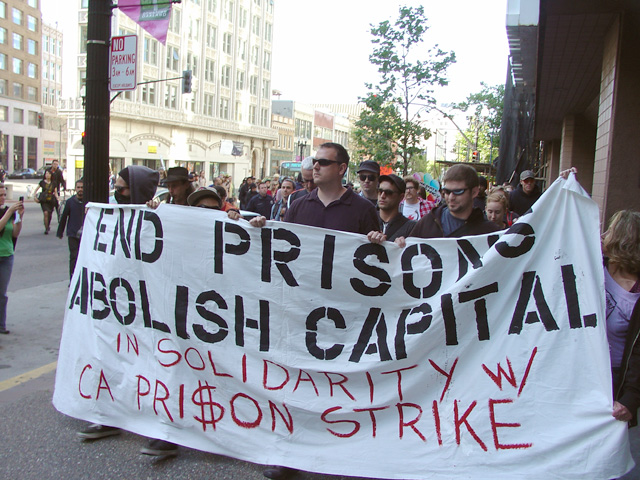 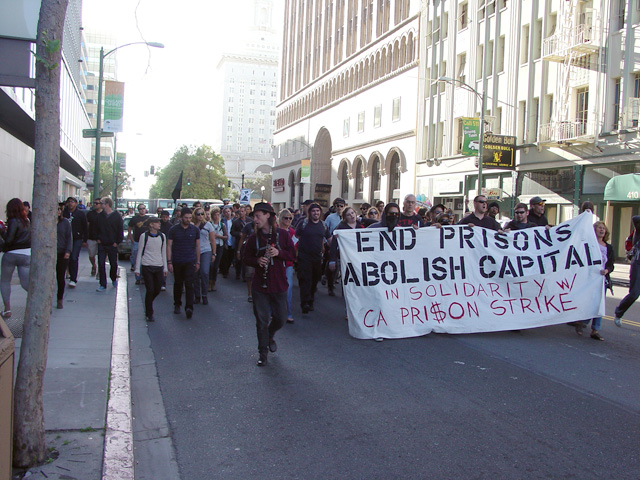 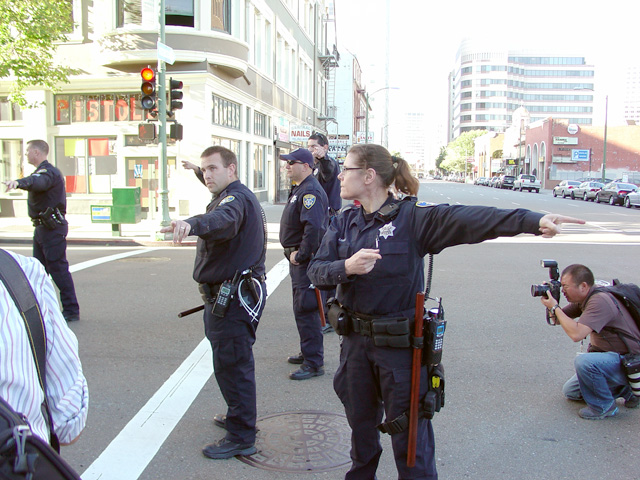 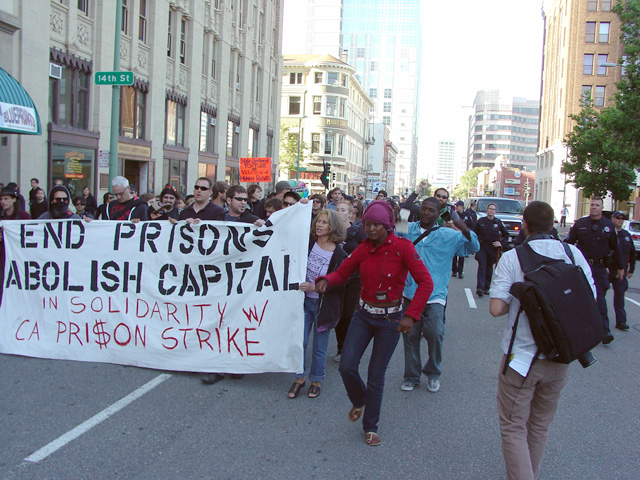 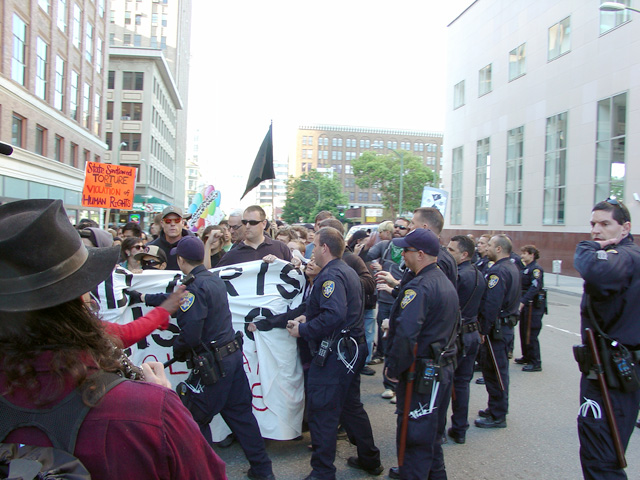 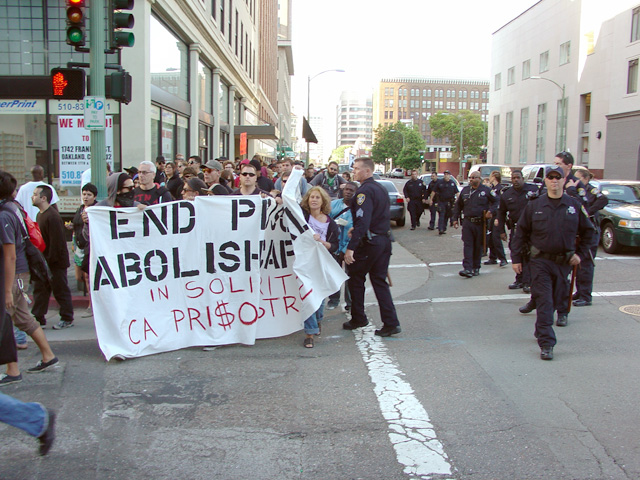 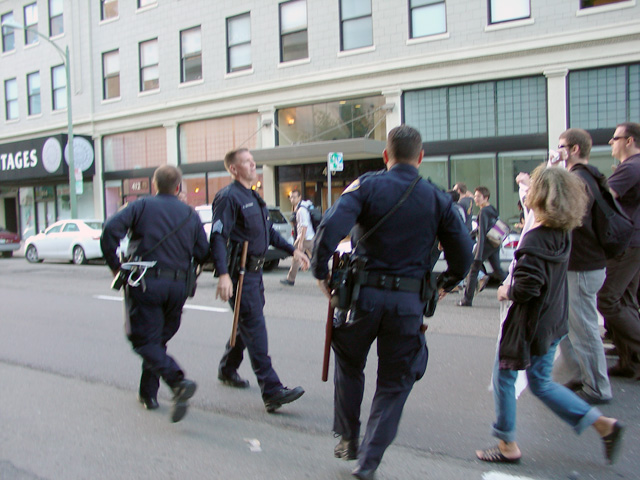 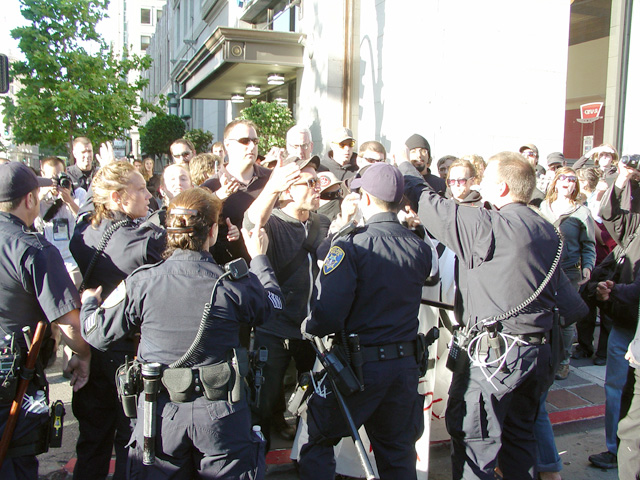 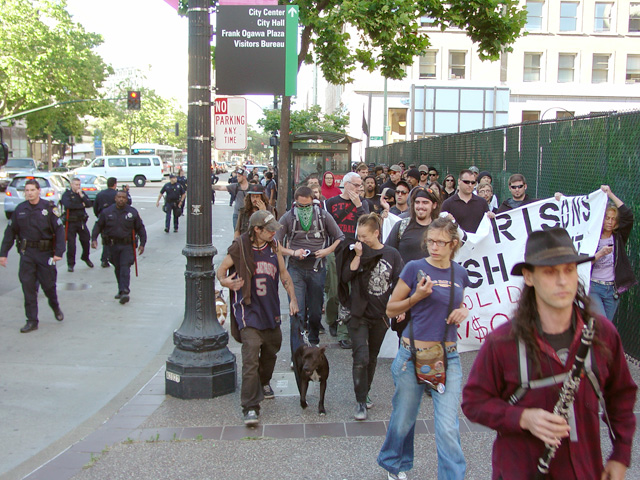 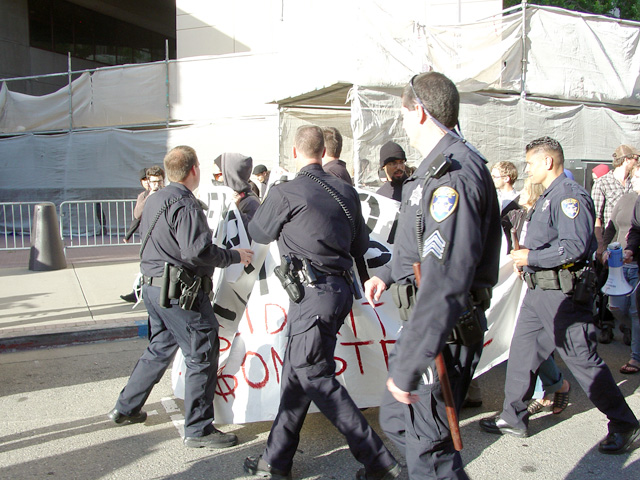 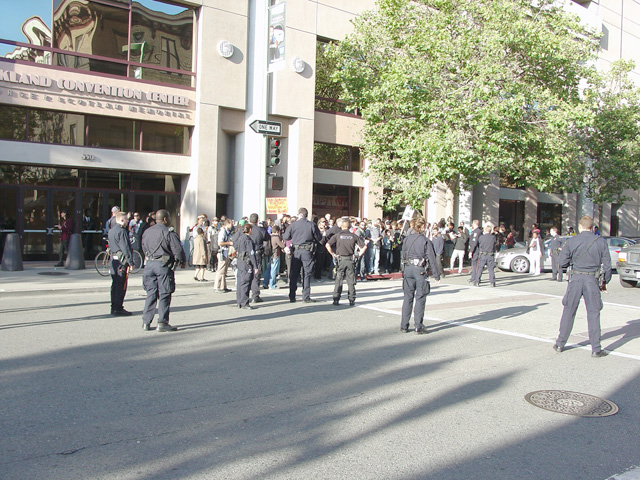