Add an Event
Newswire
Calendar
Features
Home
Donate
From the Open-Publishing Calendar
From the Open-Publishing Newswire
Indybay Feature
Publish to Newswire
Add an Event
Related Categories: California | Central Valley | East Bay | Environment & Forest Defense | Government & Elections
Over half a million splittail taken in Delta pumps on May 16!
by Dan Bacher
Tuesday May 17th, 2011 5:41 PM
On May 16, the Department of Fish and Game website reported 546,668 Sacramento splittail taken at the federal Delta water pumps and 10,028 splittail at the state pumps. 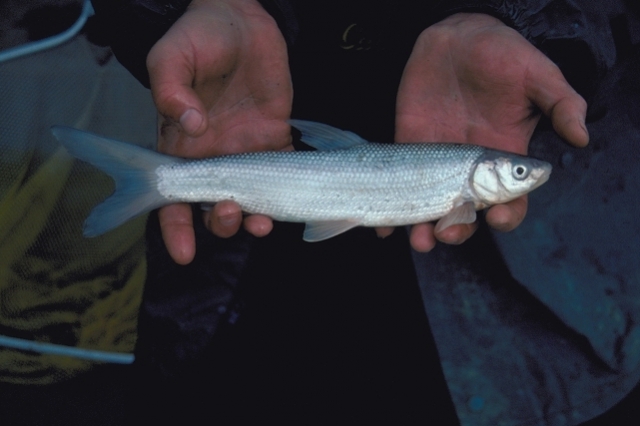 Over half a million splittail taken in Delta pumps on May 16!

Hundreds of thousands of imperiled Sacramento splittail, a native minnow species, and thousands of threatened spring-run chinook salmon have died recently at the federal Central Valley Project (CVP) water pumps in the Sacramento-San Joaquin River Delta, according to figures released by the Bureau of Reclamation.

On May 16, the "salvage" report from the Department of Fish and Game website reported 546,668 Sacramento splittail taken at the CVP pumps and 10,028 splittail at the State Water Project pumps (http://www.dfg.ca.gov/delta/data/salvage/).

On the same day, the Department reported 256 chinook salmon at the federal pumps and 546 salmon at the state pumps in the South Delta.

The alarming news comes amidst debate over federal legislation, sponsored by Congressional supporters of subsidized agribusiness corporations in the San Joaquin Valley, that would exempt export pumping to agribusiness and southern California water agencies from Endangered Species Act (ESA) protections for salmon and other fish.

“State and federal water-project pumps are pushing already-struggling salmon and native fish populations closer to extinction while Republican lawmakers are introducing legislation to eliminate environmental protections for the devastated Bay-Delta ecosystem and block restoration efforts on the San Joaquin River,” said Jeff Miller, conservation advocate with the Center for Biological Diversity. “Excessive pumping and the highest-ever water diversions from the Delta the past decade have devastated Central Valley fish populations, including commercially valuable salmon.”

Miller said recent salvage data from the U.S. Bureau of Reclamation show that the Central Valley Project pumps have so far killed more than 10,000 juvenile spring-run chinook salmon this year.

The Central Valley spring chinook salmon population, after years of rising abundance due to the removal of dams and other habitat improvements on Butte Creek and other Sacramento River tributaries, has declined over the past few years. A total of 4,612 fish, including 1,661 hatchery fish and 2,951 natural spawners, returned to the system in 2010. In contrast, an estimated 21,319 natural spawners and 4,052 adult hatchery fish came back in 2005.

Spring-run chinook were once the most abundant salmon run in the Central Valley, ranging throughout the Sacramento and San Joaquin watersheds, but now only remnant wild runs remain in the Deer, Mill and Butte creek tributaries of the Sacramento River, according to Miller. Spring-run chinook have been decimated by construction of large dams, increased Delta water exports and declining water quality. Spring-run salmon enter fresh water in the spring, while immature, and hold through the summer in deep cold pools at higher elevations, spawning in early fall.

The death of over 10,000 spring-run salmon takes place at a time of unprecedented crisis for Central Valley salmon populations. California’s ocean commercial and recreational salmon fishery was closed in 2008 and 2009 for the first time in history when the Sacramento River fall run, the driver of West Coast fisheries, collapsed.

The Sacramento fall chinook run declined from nearly 800,000 fish in 2002 to only 39,530 in 2009. An upswing in the fall run chinook population this year has allowed for a commercial and recreational salmon fishing season off the coast, but the numbers of endangered winter run and spring run chinooks continue to decline.

"The splittail was formerly protected as a federally threatened species, but was improperly stripped of Endangered Species Act protections in 2003," said Miller. "The depleted splittail population has declined dramatically in the past decade and has now collapsed to barely detectable numbers in state fish surveys."

But Steve Martarano, spokesman for the U.S. Fish Wildlife Service in Sacramento, claimed that the large showing of splittail in the pumps was not necessary a bad thing, since it showed a boom in the population during a wet water year. "In wet years the splittail spawn like crazy in the Yolo Bypass and are very plentiful," he said.

The Service announced on October 5, 2010 that the Sacramento splittail does not warrant protection under the Endangered Species Act (ESA). The agency concluded that the "best available scientific information demonstrates no recent decline in the overall abundance of the splittail nor threats that rise to the level of being significant to the splittail at the population level."

Likewise, Mike Wade of the California Farm Water Coalition responded to the news of the huge take of spring run salmon and Sacramento splittail by claiming that it demonstrated a "population explosion" by both species.

"This story confirms the adage spoken by Dan Beard when he was the head of the Audubon Society," said Wade. "Discussing environmental PR, Beard said: 'Never, ever, ever, any good news.'"

"The untold part of this story is that the Sacramento splittail population is doing great and the increased take at the pumps only represents the corresponding population explosion, according to comments by the US Fish and Wildlife Service, the National Marine Fisheries Service and the Bureau of Reclamation," Wade contended. "Improved winter conditions and floodplain habitat helped not only the splittail but also salmon, which have grown larger in the estuary's nursery."

"Patience and science will do more to help fish recover in the Delta than jumping to conclusions based on half of the facts," said Wade.

However, environmentalists and fishermen countered that it is agribusiness interests and the federal government who have jumped to conclusions based on "half of the facts."

"Obviously you have more splittail in a good water year, but if all of those fish get whacked at the pumps like they are now, they don't survive to spawn," said Miller.

"Sacramento splittail have fallen to consistently low levels since 2002," said Miller. "The estimated abundance from 2007 to 2010, as documented in the DFG fall midwater trawl surveys, has been the lowest recorded since surveys began in 1967. The numbers are so low that they don't show up in the fall surveys."

Only one splittail was documented in the fall 2009 survey and none were observed during the fall 2010 survey. The decline of splittail occurs in the context of the overall decline of the Delta's pelagic (open water) species, including Delta smelt, longfin smelt, threadfin shad, American shad and young striped bass. (http://www.dfg.ca.gov/delta/projects.asp?ProjectID=FMWT)

Conservation groups first petitioned for federal Endangered Species Act protection for Sacramento splittail in 1992; the species was listed as threatened in 1999. After litigation by water agencies challenging the listing, the Bush administration improperly removed the splittail from the threatened list, despite strong consensus by agency scientists and fisheries experts that it should retain protected status.

The Center for Biological Diversity sued, and the U.S. Fish and Wildlife Service agreed to revisit the tainted Bush-era decision. A recent analysis of splittail population trends by the Bay Institute shows that there has been a significant decline in the abundance of splittail during the past several decades.

"Research has shown no evidence that south Delta water export operations have had a significant effect on splittail abundance, even though fish collection facilities can capture a large number of fish (up to 5.5 million) during wet years, when spawning on the San Joaquin River and other floodplains results in a spike in population numbers," the U.S. Fish and Wildlife Service claimed in a press release. "The number of splittail captured by these facilities drops during dry years when recruitment is low (1,300 in 2007; about 5,000 in 2008) and the splittail is most vulnerable."

Bill Jennings, executive director/chairman of the California Sportfishing Protection Alliance, disagrees strongly with the federal government's contention that the water export pumps don't have a "significant effect" on the abundance of splittail and other species.

"So we have a wet year where we can hopefully rebuild the fish populations and what happens?" said Jennings. "The massacre resumes. These fish are dying because they never constructed the state of the art fish screens required by the CalFed Record of Decision. The pumps are an equal opportunity execution platform - they don't care what they kill."

Jennings also noted that the take of splittail, salmon and other imperiled species reported in the "salvage" operation is just a fraction of the total species slaughtered every year by the operation of the state and federal pumping projects.

Fish advocates believe that reduced export pumping and the installation of new fish screens are urgently needed to stop the carnage by the Central Valley and State water projects.

Tribe will dance for the salmon

Leaders of the Winnemem Wintu, a northern California tribe that has launched a campaign to restore endangered winter run chinook salmon to the McCloud River above Shasta, were outraged by the huge numbers of salmon and splittail killed by the Delta pumps.

"Will they call this an act of nature like they do to explain man's stupid actions?," commented Mark Franco, headman of the Winnemem Wintu Tribe. "How are the salmon to survive moving through the Delta when this happens at the pumps? What a waste!"

"Salmon need the splittail to survive in the Estuary," said Caleen Sisk-Franco, chief and spiritual leader of the Winnemem Wintu Tribe. "The Estuary is necessary for the survival of Chinook. The Chinook are necessary for the water to be drinkable and for the People. Climate change will come in to balance once we follow the salmon runs. This is why the Winnemem will dance for the salmon and Estuary on June 5th at Glen Clove in Vallejo!"

Glen Cove is a sacred gathering place and burial ground that has been utilized by numerous Native American tribes since at least 1,500 BC. A group of Native Americans and their allies is currently holding a spiritual encampment at the burial site to stop the Greater Vallejo Recreation District from desecrating the site by developing it as a park. For more information, go to: http://www.protectglencove.org.

A coalition of fishing groups, environmental organizations, Indian Tribes, family farmers and Delta residents is opposing plans by the state and federal governments to construct a peripheral canal or tunnel to divert water from the Delta to agribusiness and Southern California. The National Research Council earlier this month slammed the state’s peripheral canal proposal for lacking credible scientific analysis of the potential impacts on Delta fish and other species.