Add an Event
Newswire
Calendar
Features
Home
Donate
From the Open-Publishing Calendar
From the Open-Publishing Newswire
Indybay Feature
Publish to Newswire
Add an Event
Related Categories: San Francisco | Racial Justice
Protect Sogorea Te aka Glen Cove - let the ancestors rest in peace on land they own.
by Francisco Da Costa
Monday Apr 25th, 2011 6:37 AM
Protect Sogorea Te also known as Glen Cove. For thousands of years, before some immoral strangers set foot in the Bay Area - the Native American had Patrimonial Jurisdiction over their land. History has recounted again and again - about killings, scalping, raping, and a host of atrocities. The authorities pretending to govern the City of Vallejo must be ashamed of themselves. Paying journalist to spread disinformation and lying all the time. The land belongs to the Ohlone and the ancestors that lay buried must remain there on their land. Four hundred years ago - there was no paleface around - nor would they have the guts to say what they are saying - now, blatant lies. 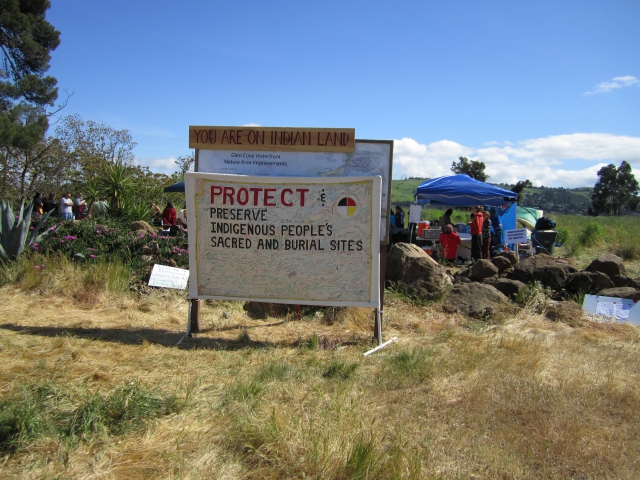 original image (4320x3240)
A small group of local Native Americans led by Corina Gould, Wounded Knee DeCampo, Morning Star and others - have the guts to stand up to very evil most White folks from Vallejo - who want to build restrooms and other mundane facilities - on Sacred Burial Ground of the Native American ancestors at Sogorea Te aka Glen Cove.

The time has come for all of California and America to wake up.

President Barrack Hussein Obama must step in and intervene. If you look at the land that the Native Americans are asking to leave alone - it is a small patch of land.

All around most White folks have built large homes - and they want it all - and lying to the teeth The Greater Vallejo Recreation District (GVRD) calling for development on land that has belonged to the Ohlone for thousands of years. 12,000 years plus.

Archeologists first surveyed Glen Cove way back in 1907 as they did other Shellmounds - all Sacred Burial Grounds.

The many Shellmounds are well know to those that care to understand such facts. Over the years the Developers have crafted policies and used ploys and machinations - even bribing local Native American so called monitors - to circumvent the law.

Recent hundreds of remain were found at Yerba Buena - and no detail report given to the community at large.

Few people know that Candlestick Park has Ohlone Remains scattered all over the stadium - with dirt that was removed from the Bayview Hill.

Few people know the same thing happened on Treasure Island and as I said is taking place at Yerba Buena - remains have been removed - in the years past - dispose without follow any process - in recent years processed with the help of sell outs monitors who are paid - not to say much - but will be taken to task by the Grand Father.

Permits have been given to Rogue Developers to build over the Shellmounds - Sacred Burial Ground of the Ohlone.

On such site - thousands of remain are found, sometimes hundreds.

Such racial undertones by folks that should know better - defeat the purpose of having an understanding, a dialog - there is saying about folks that speak with a forked tongue - and the world know these segment that unfortunately belongs to homo sapience.

Big development took place over many Shellmounds in the Bay Area - that is what happen at Emeryville Shopping Center - build on top on one of the largest Sacred Burial Grounds and the Project Manager was Kofi Bonner. Kofi Bonner - the same person who is now President of Lennar, Urban and trying to use his tactics - elsewhere.

The same person who now wants to develop Treasure Island and Yerba Buena - and on both these sites that are serious archeological concerns that have to be addressed. When it comes to Archeological concerns and those linked with Anthropology and Sociology - only the Whites are deemed to know; better than the Native Americans?

What the Whites really know and are good at is lying.

Stealing remains, artifacts, and displaying them in their fake, shallow museums. These evil folks are fascinated with such issues - that most indigenous people refrain from touching and disturbing.

The University of California, Berkeley has over 14,000 remains stored in boxes and kept in vaults and in a unused gym. Why would any decent organization participate in such an atrocities?

Well, that is just how the White Man is and has been behaving all over the world. Here is our Bay Area. The Environmental Foundations have been slow to address these facts and failed to investigate the desecration of the Ohlone, Pomo, the Miwok others tribes in Northern California and all over California.

The younger Native American children cannot understand the behavior of the adults and especially the authorities in Vallejo in this day and age - challenging the the Native Americans - who demand that there ancestors - be left in peace.

We do not have to request - that time is over.

I was one of those years ago that explained about the Native American Graved Protection Act (NAGPRA) - years ago. The problem is that these immoral folks think the have the law on their side when they do not.

If you look around Glen Cove; the area in question - most of it is developed - and the greed folks want it all - much like a hungry hog that eats and eats and then lies there in the filth.

You cannot reason with such folks - because if you do and prove you reasoning superior - they RACISTS; pull out the race card. Now, I am not stupid to state that all White folks are racists - but these folks that back The Greater Vallejo Recreational District and the Vallejo Council are - racist to the core.

The Native people have never, ever once been brought to the table for any meaningful dialog.

It is always someone with little knowledge and understanding sets the agenda and the other side told to listen to the hog wash - because apparently the initiators know it alll.

Native American be they Ohlone, Miwok, Pomo, Piute, others have been here in the Bay Area for thousands of years - have been mistreated - shot at, killed, scalped, raped, and the worst atrocities committed upon.

Not long ago the Governors in Sacramento - sent edicts to kill the Native Americans - and if you produced a SCALP - you were rewarded $5.
Shame on such folks and their ancestors. Blood in on their hands - that is why they have no peace of mind.

I have deal with such issued linked to Patrimonial Jurisdiction at Yosemite, the San Bruno Mountain, Hunters Point Naval Shipyard, Yerba Buena, Emeryville, Glen Cove and a thousands other sites - that we visit - when we organize our Shellmound Walks.

White Folks seem surprised mostly when you tell them our ancestors are buried in the Open - they always expect some large monument to be built where the dead rest in peace. Much like they do there ancestors most of whom led sordid lives. Amassed illegal wealth to build large monuments - from that illegal wealth and did less good when they were - alive.

Just look around you - what person would cut down so many giant, majestic - Redwood Trees? Only the strangers.

Just think about the tens of thousands buffalo that were slaughtered for there skins - the flesh left to rot. Who would do this - only one two legged animal with blue eyes.

Evil to the core - this animal wants it all. In this economy - where we must save - Vallejo wants to challenge the Native Americans. Well, think twice before you venture and take this route.

I encourage all fair minded people to go to Glen Cove and see what is happening. Support the protesters with water and food. With warm clothing, tents, fire wood, and what other assistance you can give.

The Native American has been kind to the immigrants - and the many immigrants who live in the Bay Area - have no clue about reality. The few that know - do not want to get involved.

Well, this is your one time to get involved and say your peace.

Here are some photographs of the site and the people protecting the land of their ancestors: