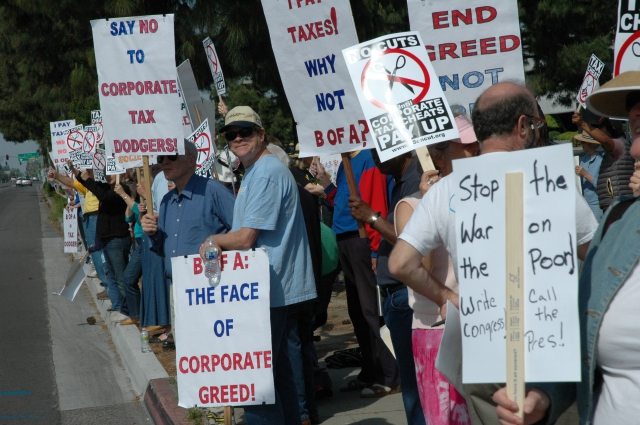 original image (3008x2000)
About 100 protestors on Shaw Avenue (across from Fashion Fair) held signs, sang and demanded that Bank of America pay its taxes. Protesters said Bank of America is the largest bank and the fifth largest corporation in the country, holding more than $2.2 trillion in assets, and yet it pays less in taxes than the average American household. USuncut (http://www.usuncut.org/targets/bankofamerica), which helped organize these demonstrations nationwide, says that the federal government gave Bank of America $2.3 billion in 2009 while it made $4.4 billion in profits.

Connie Peterson, a lead organizer of the Fresno demonstration, said, “I felt compelled to organize the event at this particular time because everything I believe in is under assault, and it has never felt more personal—being a public servant [a social worker] myself, and a person with intimate knowledge of how draconian cuts to social services affect the least among us, and also as an avid environmentalist.”

Peterson continues, “It is outrageous that the likes of the Koch Bros, in cahoots with the Republican Party, have orchestrated one of the more appalling ‘bait and switches’ I have ever seen—shredding our already meager safety net, attacking the basic rights of working people, and specifically public servants, when the actual cause of the Great Recession, unfunded pensions and budget deficits, in addition to the unfunded wars driven by the military-industrial complex, was Wall Street hyper-speculation and greed.

“A sane tax policy is also a major issue, hence the timing of this event on tax weekend with the essential message ‘I paid my taxes, what about B of A?’”

The Fresno demonstration was promoted by groups that included Volunteers for Change (Fresno chapter), the Community Alliance, Peace Fresno, the Progressive Democrats of America, the Fresno County Democratic Central Committee, the California Teachers Association and the Universalist Unitarian Church’s Social Justice Committee. Individuals aligned with these organizations participated, as did SW Education staff, students from Fresno State, WILPF (including the Raging Grannies) and several “unassociated” individuals from as far away as Oakhurst and Reedley.

“About 100 persons participated,” said Peterson, “but what I was most pleased about was the broad representation.”