Add an Event
Newswire
Calendar
Features
Home
Donate
From the Open-Publishing Calendar
From the Open-Publishing Newswire
Indybay Feature
Publish to Newswire
Add an Event
Related Categories: U.S. | Environment & Forest Defense
A carbon neutral solar and wind powered world in 20 to 40 years?
by Takver - Climate IMC
Wednesday Jan 26th, 2011 6:24 PM
Is it achievable? You bet! All it takes is the political and social will to make it happen says two California based researchers who have just published a study of the material resources and technology required to power the world 100 per cent by carbon emission neutral alternative energy technologies. It would also save 2.5 million to 3 million lives a year through slashing water and air pollution and simultaneously slow global warming and the problems of climate change, and develop secure, reliable energy sources and at costs comparable with what we spend on energy today. 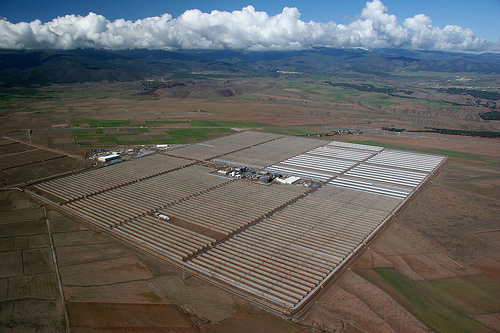 It sounds like a no-brainer. Why don't we do it?

"Based on our findings, there are no technological or economic barriers to converting the entire world to clean, renewable energy sources," said Jacobson, a professor of civil and environmental engineering at Stanford University. "It is a question of whether we have the societal and political will."

The study - Providing all global energy with wind, water, and solar power, Part I: Technologies, energy resources, quantities and areas of infrastructure, and materials - by Mark Z Jacobson and co-authored with Mark Delucchi, of the University of California-Davis, has been published in Energy Policy. Jacobson is the director of Stanford's Atmosphere/Energy Program and a senior fellow at Stanford's Woods Institute for the Environment and the Precourt Institute for Energy.

The world they envision would run largely on electricity. Their plan calls for using wind, water and solar energy to generate power, with wind and solar power contributing 90 percent of the needed energy. Geothermal and hydroelectric sources would each contribute about 4 percent in their plan (70 percent of the hydroelectric is already in place), with the remaining 2 percent from wave and tidal power.

For transportation, Vehicles, ships and trains would be powered by electricity and hydrogen fuel cells. Aircraft would run on liquid hydrogen.

For domestic heating electric heaters would be used and natural gas and coal would be phased out. Solar hot water systems, with electric boosting where necessary, would supply warm water for household needs.

Most Commercial and industrial processes could be powered by electricity and hydrogen, with the hydrogen produced from electricity.

Converting combustion processes to electrical or hydrogen fuel cell results in energy efficiencies likely to produce a 30 per cent reduction in world energy demand. This saving, along with the social and medical savings of greatly reducing air and water pollution means the overall costs is similar to our reliance on fossil fuel energy today.

"When you actually account for all the costs to society - including medical costs - of the current fuel structure, the costs of our plan are relatively similar to what we have today," Jacobson said.

The researchers approached the conversion with the goal that by 2030, all new energy generation would come from wind, water and solar, and by 2050, all pre-existing energy production would be converted as well. "We wanted to quantify what is necessary in order to replace all the current energy infrastructure - for all purposes - with a really clean and sustainable energy infrastructure within 20 to 40 years," said Jacobson.

The authors quash the myth that solar and wind are unreliable for "base load" energy. "The most important thing is to combine renewable energy sources into a bundle," Jacobson said. "If you combine them as one commodity and use hydroelectric to fill in gaps, it is a lot easier to match demand."

Wind and solar are complimentary. Wind often peaks at night and sunlight peaks during the day. Using hydroelectric power to fill in the gaps, as it does in our current infrastructure, allows demand to be precisely met by supply in most cases. Other renewable sources such as geothermal and tidal power can also be used to supplement the power from wind and solar sources.

"One of the most promising methods of insuring that supply matches demand is using long-distance transmission to connect widely dispersed sites," said Delucchi. Even if conditions are poor for wind or solar energy generation in one area on a given day, a few hundred miles away the winds could be blowing steadily and the sun shining.

"With a system that is 100 percent wind, water and solar, you can't use normal methods for matching supply and demand. You have to have what people call a supergrid, with long-distance transmission and really good management," he said.

The first commercial solar power plants are already in operation with heat storage, allowing the plant to maintain power production 24/7.

What will implementing this plan involve?

"This really involves a large scale transformation," Jacobson said. "It would require an effort comparable to the Apollo moon project or constructing the interstate highway system."

"But it is possible, without even having to go to new technologies, We really need to just decide collectively that this is the direction we want to head as a society." concluded Jacobson.

The installation of Solar and wind power is already occurring, but from such a small base that it needs a massive injection of development. In 2009 renewables accounted for more than 50 percent of newly installed generating capacity in the U.S. and the European Union, while China added 37 gigawatts of mostly wind and hydropower in 2009, according to the United Nations Environment Program. China installed more wind turbines in the first half of 2010 than any other country -- 7,800 megawatts of potential power production. But this is still a drop in the bucket with what is required to replace fossil fuel generationpower.

According to David Biello in Green Energy's Big Challenge: The Daunting Task of Scaling Up writing in Yale Environment 360, global energy consumption currently is 81 percent from fossil fuels. To totally convert this to zero emissions the The International Energy Agency estimates the world needs to build every year between now and 2050: 35 coal-fired and 20 gas-fired power plants with carbon capture and storage; 30 nuclear power plants; 12,000 onshore wind turbines paired with 3,600 offshore ones; 45 geothermal power plants; 325 million square meters-worth of photovoltaics; and 55 solar-thermal power plants.

In Australia the feasibility of converting our energy sector to zero carbon emissions by 2020 has been detailed in a Beyond Zero Emissions award winning report - Zero Carbon Australia 2020. It requires a substantial investment in wind and solar power generation and a major upgrade to a high efficiency transmission grid. Economic modelling shows the Zero Carbon Australia 2020 plan could be implemented for a total cost of about $370 billion, or $37 billion per year - about 3 per cent of GDP per year for 10 years.

President Obama in his 2011 State of the Union Address stressed the need for investment in clean energy technology to strengthen security, protect the planet and create new jobs and cutting the huge subsidies for the oil industry. "We're issuing a challenge. We're telling America's scientists and engineers that if they assemble teams of the best minds in their fields, and focus on the hardest problems in clean energy, we'll fund the Apollo projects of our time."

It is another thing whether Obama can successfully manoeuvre such a program through the Republican controlled Congress, with many politicians (both Democrat and Republican) elected on campaigns funded from oil and fossil fuel industry donations.

"It's not going to be easy to make an energy plan that adds up; but it is possible," says physicist David MacKay of the University of Cambridge, an expert on scaling up renewable energy, in the Environment 360 article, "We need to make some choices and get building."

All it requires is the political and social will to increase the rate of transformation and build the energy infrastructure for the future.