by Ann Garrison
Two years ago, on January 20, 2009, Barack Obama, the U.S.A.'s first African American president, invaded the Democratic Republic of Congo, the heart of Africa, on his Inauguration Day.
Most Americans, including those who campaigned hardest for Obama, would have a hard time making sense of this, or of the military forces involved. Most would not recognize the acronyms of the Rwandan Defense Force (RDF), the Rwandan Patriotic Front (RPF), the National Congress for the Defence of the People (CNDP), the Ugandan People's Defense Force (UPDF), or the Democratic Forces for the Liberation of Rwanda (FDLR).
So, what sense does it make, to say that Barack Obama invaded Congo, the heart of Africa, on his Inauguration Day?  It makes sense because:
1)  On his Inauguration Day, Obama became the Commander-in-Chief of the U.S. Armed Forces.
2)   The Rwandan and Ugandan armies serve as the U.S. military's proxies in Africa.
Read more at Global Research, http://www.globalresearch.ca/index.php?context=va&aid=22899. 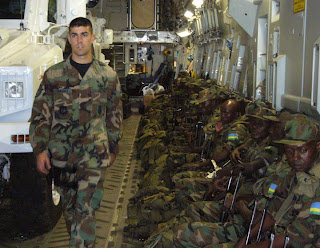 Rwandan soldiers in a US military transport plane.

All photos courtesy of Military.com, and your tax dollars.
END_OF_DOCUMENT_TOKEN_TO_BE_REPLACED
Add Your Comments
Support Independent Media
We are 100% volunteer and depend on your participation to sustain our efforts!