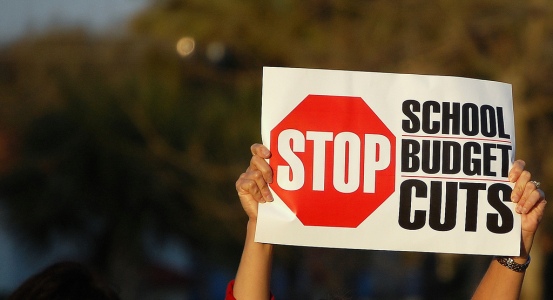 Career politician Jerry Brown was ushered into the seat of California's Governor not from a huge turnout of voters at the polls, or even from the same young people who helped Obama's landslide victory, but instead mainly from people who just didn't want to see Whitman get the job.

However, just like Whitman, Brown shares her tough on immigrants, education, and workers approach - even though some of the country's biggest unions helped him get into office.

With the state facing a $25.4 billion budget gap for the 2011-12 fiscal year, Gov. Jerry Brown proposed $500 million in cuts to the University of California as part of his 2011-12 budget on Monday. Brown unveiled his first recommendation for the state's 2011-12 budget, proposing a total of $12.5 billion in reductions in state spending levels. His plan includes deep cuts to state welfare programs and a total of $1 billion in funding reductions to the state's higher education system.The California State University system - which has also experienced severe cuts in recent years - also will sustain a $500 million cut through Brown's plan. The plan also includes $432.5 million in cuts to the state's community college system while increasing the price per unit from $26 to $36.

According to Joseph Kishore, these cuts go even deeper than those under Arnold:

The cuts include: $1.5 billion from the state’s welfare program; $1.7 billion from Medi-Cal (the state Medicaid health care program for the poor); $1 billion from the state university systems; and $750 million from the Department of Developmental Services, which provides aid to the disabled. Pay for state workers not covered by collective bargaining agreements will be cut by 10 percent, and Brown has made clear that he is targeting the pensions and pay of all state workers. In addition, the governor will seek a referendum vote to keep in place a series of regressive taxes, including sales taxes and a vehicle license fee.

Brown’s reference to sacrifices from “every sector of the state” is a fraud, as it is only the poor and working class that will be forced to pay. California, the largest state by population, is also home to six of the country’s wealthiest 10 zip codes and 19 of the wealthiest 400 individuals. A wealth tax of 10 percent on these 19 people, who have a combined net worth of $136.2 billion, would raise more money than the value of all the cuts in Brown’s budget for the next 18 months.

According to Dan Conway, the large trade unions were only happy to pat Brown on the back for attacking the people they claim to represent:

The Democratic Party and the trade union bureaucracy quickly lent their support to Brown's plan. In both cases, phony expressions of concern are mixed with praise for the governor's “realistic” approach to the budget. While Brown may be proposing the same budgetary solutions and austerity as former Republican governor Arnold Schwarzenegger, it is argued, his approach is far more progressive and effective by virtue of his “superior leadership skills.”

Of the state trade union leaderships who have thus far commented on the governor's budget, support has been unwavering. Barbara Blake, state secretary of the United Nurses Association of California, declared, “We're feeling a little better about this budget,” than previous ones.

The SEIU, which has the largest membership of any public employee union, was particularly instrumental in fostering illusions in Brown as a working class candidate. According to an SEIU's statement, “Electing Jerry Brown was the 700,000 member organization's number one priority in this election.” The statement also quoted Bill Lloyd, president of SEIU California: “California voters had a clear choice in this election, and we chose Jerry Brown to lead California's recovery by investing in jobs and the working families who make California strong.”

After only one week in office, the state's working class now has a sense of how the new governor intends to “invest in jobs and the working families who make California strong.”

As the economic crisis becomes deeper, we see the state (whether masquerading as 'left' or 'right') for what it is. A bureaucratic entity who's sole function is to protect the divisions that exist between those that work, and those that own. Those that take orders, and those that give them. The haves, from the have nots. Austerity measures cut eduction and health care, welfare programs and free day care; the things that working people depend on just to survive within capitalism.

At a time when Wall-Street is recording record profits and when slight tax increases to the richest Californians would end the budget crisis, the government shows itself to be a weapon of class rule against the working class on behalf of the rich and powerful. No matter if Democrats or Republicans are in charge of the state, the government knows who it serves. We're living in some of the worst times and the elites are busy having a cocktail party. It's time to stop voting, stop believing the politicians and union leaders will bring us change, and start to build power in our work places and neighborhoods. It's time we meet our needs - not create our own misery.
http://www.modestoanarcho.org
Add Your Comments
Support Independent Media
We are 100% volunteer and depend on your participation to sustain our efforts!