Add an Event
Newswire
Calendar
Features
Home
Donate
From the Open-Publishing Calendar
From the Open-Publishing Newswire
Indybay Feature
Publish to Newswire
Add an Event
Related Categories: International | Environment & Forest Defense
Japanese whaling fleet located by Sea Shepherd
by Takver - Australia Indymedia
Friday Dec 31st, 2010 4:08 AM
For the first time in seven years of campaigning in the freezing waters of the southern ocean Sea Shepherd have been able to locate 2 harpoon vessels in the whaling fleet before whaling was able to begin. The Sea Shepherd vessels Bob Barker located on New Year's Eve of 2010 an unidentified harpoon vessel on the edge of the Antarctic ice at 148 degrees west. Shortly after the Sea Shepherd flagship, the Steve Irwin, found the Japanese harpoon vessel Yushin Maru #2 sitting in the ice some 60 miles to the north. 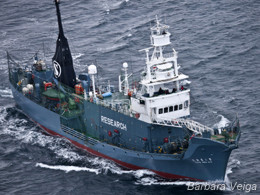 The location of the Nisshan Maru whaling factory ship is still unknown, with the third Sea Shepherd vessel, the Gojira, and the Steve Irwin based helicopter, the Nancy Burnet continuing the search.

The whaling fleet left Japan very late this year and also announced a whaling area double the size in the hope to avoid an early confrontation with Sea Shepherd. Their luck has run out before they could even start the whaling slaughter in the southern ocean whale sanctuary.

Japan self issued a scientific permit for a four-ship fleet to slaughter up to 935 minke whales and 50 fin whales this summer. Humpbacks were also included in the permit but Japan has suspended catching this species "as long as progress is being made in the discussions on the future of the IWC".

It has been reported that Armed coast guard troops are stationed on Japanese whaling ships. Last year the Sea Shepherd vessel Ady Gil was severly damaged in a collision with the Shonan Maru 2, and was later scuttled.

Back in Japan, the Fisheries Agency of Japan (FAJ) has admitted that their officials have received free whale meat from the company contracted to perform the whaling. The two Japanese Greenpeace activists who attempted to highlight this corruption have been vindicated, according to Greenpeace.

The Australian Government has launched legal action against Japan in the International Court of Justice. Opposition spokesperson Greg Hunt has urged the Government seek an interim injunction from the court as proceeding may take until 2013 for a decision.