Add an Event
Newswire
Calendar
Features
Home
Donate
From the Open-Publishing Calendar
From the Open-Publishing Newswire
Indybay Feature
Publish to Newswire
Add an Event
Related Categories: International | Environment & Forest Defense
Red Cancun: A Daily Guide to the COP16 Summit from the Indigenous Environmental Network
by Dallas Goldtooth, Melina Laboucan-Massimo
Monday Nov 29th, 2010 11:08 PM
In this show, we will introduce you to some of the indigenous peoples who have come to Cancun to represent communities impacted by the fossil fuels and extractive industries: Who they are, why they are here, and what they hope to accomplish.

Then, for the rest of the hour will be joined by Tom Goldtooth of the Indigenous Environmental Network to reflect on his engagement with the UN process so far and discuss what, according to his view, are the most important issues to follow in the next couple of weeks. 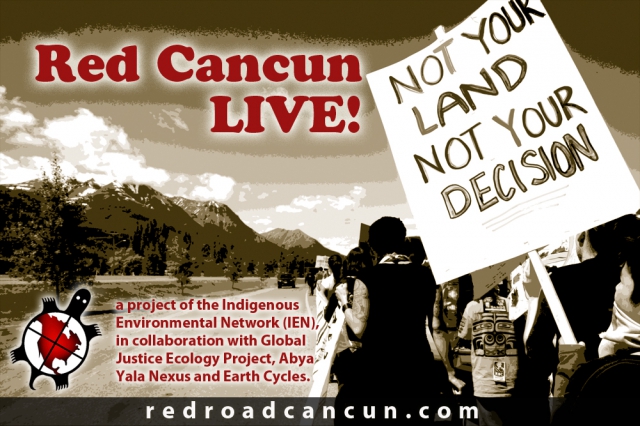 Today marks the beginning of the 16th session of the Conference of the Parties of the United Nations Framework Convention on Climate Change, otherwise known as COP16.

This week, hundreds of delegates representing 192 different countries will meet in Cancun to attempt to negotiate a common framework for addressing climate change. At the same time, an estimated 100,000 people, from campensino and Indigenous communities, to concerned people from around the globe, will converge outside of the conference to demand action from their government representatives.

In this show, we will introduce you to some of the indigenous peoples who have come to Cancun to represent communities impacted by the fossil fuels and extractive industries: Who they are, why they are here, and what they hope to accomplish.

Then, for the rest of the hour will be joined by Tom Goldtooth of the Indigenous Environmental Network to reflect on his engagement with the UN process so far and discuss what, according to his view, are the most important issues to follow in the next couple of weeks. But first, here are the headlines:

Indigenous Peoples from all regions of the World held a preparatory meeting over the weekend in Cancun, and created a statement of common issues and demands to be presented at the opening session of COP16.

The statement recognized threats to indigenous food security and habitats around the world and called for a change in the modes of production and consumption that are causing climate change. The statement also called out market-based mitigation strategies such as the Clean Development Mechanism and carbon offsets, including forest offsets and REDD, as threatening their human rights, including the right to free prior and informed consent.

A recently released document from the Chair of the LCA working group faced harsh criticism this week from the Bolivian government. The LCA working group is tasked with developing a Long-term commitments within the COP 16 process. The document, which contained the working group's expected outcomes for the COP 16 session, came under fire for eliminating all of the proposals of the World People’s Conference that took place last April in Bolivia, attracting over 35,000 delegates. These proposals include the recognition of the Rights of Mother Earth and the full application of human rights principles, including the rights of indigenous peoples and climate migrants.

According to a press statement released by the Bolivian delegation, the new document goes even further than the “Copenhagen Accord” by inviting the World Bank to administer the new climate fund, and limiting financing for climate change to 1 billion dollars – ignoring the proposal of the G77 and China to dedicate 1.5% of the GNP of developed countries (the equivalent of 6 billion dollars) to financing climate change and the proposal of Bolivia to use 6% of of the GNP of developed countries.

The Indigenous Environmental network also condemned the removal of the Cochabamba text from the COP 16 negotiating document. Beyond the lack of transparency in that process, a key concern with the negotiating document is its blanket support for REDD, or Reduction of Emissions from Deforestation and Degradation. According to IEN, REDD will allow industrial polluters to continue their practices virtually unabated, while also threatening indigenous and land-based peoples with eviction and marginalization. It contains no safeguards, no guarantee of rights, and a disturbing array of potential governance challenges. A key element of the Cochabamba Accord condemned the use of market mechanisms such as REDD, for violating the sovereignty of peoples as well as their right to prior free and informed consent.

We'll hear more from the Bolivian delegation later on this week...

A historic case was filed by an international coalition at the Constitutional court of Ecuador against BP and its crimes against nature. Ecuador recognises the rights of nature in its current constitution adopted in 2008, which provides the fundamental basis for this legal case.

The case was brought with regard to the massive environmental disaster caused when BP’s Deepwater Horizon rig exploded on April 20, 2010. That incident exposed BP’s drive to maximise profit with total disregard of nature and its rights. The company constantly lied with regard to the scale of the disaster and then used unusually high amounts of toxic chemical dispersants to cover up the spill. This disaster was not limited to the Gulf Coast but has wider reach through the movement of water as well as atmospheric pollutions.

The defendants, who include world-renouned ecologist Vandana Shiva, Nnimmo Bassey with Friends of the Earth Nigeria, Delfín Tenesaca with ECUARUNARI, and Cecilia Chérrez of Acción Ecológica in Ecuador, are not seeking financial compensation in the lawsuit. Instead, their demands include that BP release all data and information on the ecological destruction caused by the oil spill, and that they reduce their oil extraction.

Speaking after filing the case, the defenders of nature insisted that phasing out crude oil as a major energy source should be an issue of critical importance at the climate conference in Cancun.

[interviews with IEN delegates and Tom Goldtooth]
http://redroadcancun.com
§Audio of the show
by Dallas Goldtooth, Melina Laboucan-Massimo Monday Nov 29th, 2010 11:08 PM
Listen now:
Copy the code below to embed this audio into a web page:
Download Audio (38.0MB) | Embed Audio
http://redroadcancun.com
Add Your Comments
Support Independent Media
We are 100% volunteer and depend on your participation to sustain our efforts!