Add an Event
Newswire
Calendar
Features
Home
Donate
From the Open-Publishing Calendar
From the Open-Publishing Newswire
Indybay Feature
Publish to Newswire
Add an Event
Related Categories: California | Labor & Workers
Who Is Brian Edward's Tiekert leading the KPFA cause ?
by lisa dettmer
Thursday Nov 25th, 2010 3:27 AM
Recently KPFA radio has been in convulsions since the Pacifica management laid off two of the Morning Shows hosts Brian Edwards Tiekert and Aimee Aillson because KPFA is in dire debt and the KPFA management had failed to propose a budget for 3 months. So Pacifica was forced to lay off workers based on seniority. Since then the paid member of KPFA's Union have essentially refused to take those jobs on the Morning Show at the same time claiming Pacifica was destroying the Morning Show and against local programming since it was airing a show out of LA while it attempted to get the union to agree to work on the Morning Show. 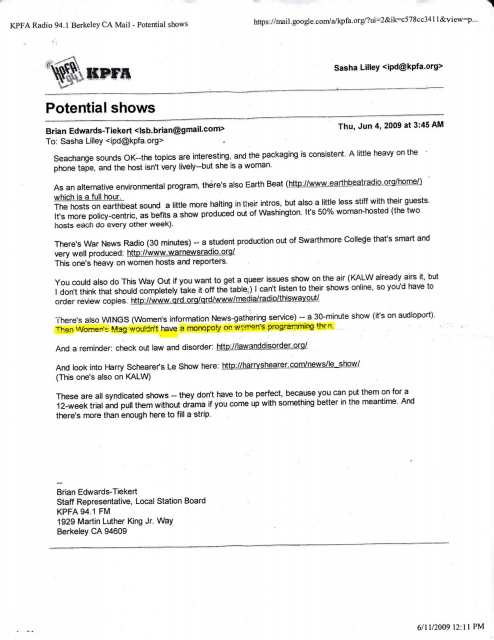 original image (1236x1600)
Now KPFA Worker group and the SAVE KPFA group led by LSB member Brian Edwards Tiekert (AKA BET) is claiming on their SAVE KPFA website that there new motto is to "BRING BACKthe Morning Show, HANDS OFF Hard Knock Radio & other locally-controlled programming." Wow ! The irony of this is so thick that only the Tea Party could be so arrogant to state such blatant misinformation. First it was OK with Brian and the KPFA management and KPFA union when it was Hard Knock radio that was one of the original the shows to be cut, even though that didn't follow seniority rules required by the union. And it has never been the least bit interest of the Brian Edward Tiekert crowd to support locally controlled programming until of course the Morning Show was replaced temporarily with a show from LA and this was only done because the Morning Show had spent the first days of their lay off using the Morning Show to campaign for their position and where not the least concerned to be the professional journalists they had been claiming they were and provide a balanced look at the issue of what is going on at KPFA. This is nothing new for those of us who have been laboring at KPFA for a while. The Union which claims to be concerned with Union busting now wasn't concerned about past layoffs and seems to be only concerned with BET being laid off since the Union members were not the least bit concerned when very drastic cuts were made to Flashpoints, Hard Knock, Full Circle and other people at KPFA over the last year. Now suddenly they are concerned ostensibly because the Morning Show raises SO much money - which it does - but not simply because of Brian and Aimee’s talents but because it is a prime time show. But even though the SAVE KPFA group claims to be concerned with the ability of KPFA to raise money they have also refused to allow any Union members would take the job on the Morning Show. So their concern seems less with helping KPFA to survive then with their own jobs. Yet that concern has not been there when others were laid off, or even worse dragged off by police.

As for Brian and SAVE KPFA's new found interest in local programming - one can not help but wonder why that was not present when Brian wrote to then Interim PD Sasha Lilley in 2009 suggesting a list of free syndicated programs that could be used to replace shows including the Women's Magazine since there would be less resistance by local staff when the shows were pulled if the syndicated shows didn't work out. This happened after Women's Magazine failed to support the current KPFA General Manager who in turn did all she could to get rid of Women's Magazine including asking Brian to draw up a list of possible NON LOCAL shows that could be used to replace us.

So the hypocrisy runs deep. Much like the Tea Party facts are to be manipulated much like the audience. which I hope is smart enough to wade thru all the BS and make up its own mind.

So check out this document written by Brian Edward Tieket and ask yourself who is Brian ? Is it just a host or so much more? I know I thought Brian was my friend so it was extra hurtful to know this person i worked and talked with was writing a memo behind my back on how to get rid of the Women's Magazine. Funny they loved us when we first got the show and were on the KPFA management side.....

Add Your Comments
§Brian's role in management?
by KPFA listener
Saturday Nov 27th, 2010 12:35 PM
That email is one more indication that Brian Edwards-Tiekert is far more involved in the management of the station than he pretends to be.

Add a Comment
§THE DISMANTLER
by No Fool Observer
Tuesday Dec 14th, 2010 7:07 PM
brian edwards tiekert + Roberts rule of order to disrupt meetings until no one shows up+ assumption of positions for which he was unqualified see staff representative and treasurer add suing city using republican lawyers and the ensuing chaos = cognitive infilitration of and the dismantling of KPFA...
Add a Comment
§Thank you
by Liang
Wednesday Jan 12th, 2011 7:53 AM
Thank you Lisa Dettmer for telling your story. It does confirm my opinion of what was taking place and I hope KPFA emerges stronger in the near future. Too many have had their focus on everything but the KPFA listeners and bringing those listeners the best program possible. Thank you for illuminating the situation and sorry you had to go through it.
Add a Comment
Support Independent Media
We are 100% volunteer and depend on your participation to sustain our efforts!