Add an Event
Newswire
Calendar
Features
Home
Donate
From the Open-Publishing Calendar
From the Open-Publishing Newswire
Indybay Feature
Publish to Newswire
Add an Event
Related Categories: International | Environment & Forest Defense
Unist’ot’en leadership takes to the streets to stop the Enbridge and KSL pipelines
by Sheila Muxlow
Monday Jul 19th, 2010 10:13 AM
The ‘Unist’ot’en of the Wet’suwet’en Nation alongside their grassroots allies and supporters assembled in Smithers to organize a rally designed to assert their title and rights on their ancient lands. The rally was organized and led by the ‘Unist’ot’en leadership and had the demonstrators primarily target the Ministry of Forests offices and the Ministry of Environment office. 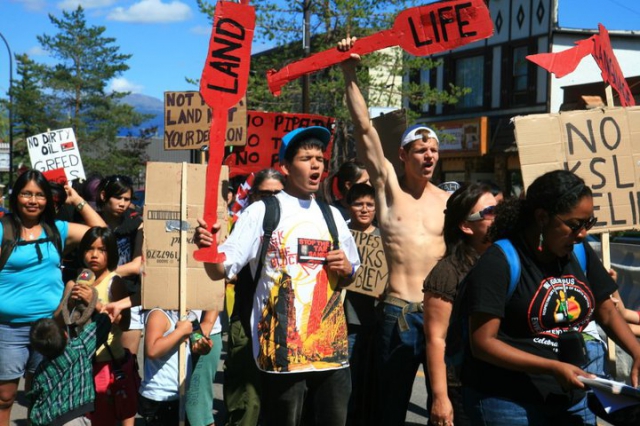 original image (720x480)
Just after lunch on July 16th in the town of Smithers, BC on the unceeded territory of the Wet’suwet’en Nation more than 100 people took to the streets holding signs and following a banner “’Yin’Tah Wew’at zënlï’ ‘Taking Care of the Land’”

The group was organized by the ‘Unist’ot’en leadership of the Wet’suwet’en Nation alongside their grassroots allies and supporters. They assembled in Smithers to organize a demonstration designed to assert their title and rights on their ancient lands. The action was a well-planned march with strategic stops at the Ministry of Forests office and the Ministry of Environment office where the Unist’ot’en asserted their legitimacy as a governing body and their right to free, prior and informed consent before any decisions about development on their land.

The march also provided the ‘Unist’ot’en with an opportunity to offer support to the allies who had come in to support the action. The Tsilhqot’in Nation members from Tl’etinqox (Anaham) and Tl’esqox asserted their rights to stop proposed plans for Prosperity Mine to develop a copper and gold body that will destroy and drain a sacred lake called Teztan Biny (Fish Lake) in their traditional territories. The Lubicon Cree of central Alberta spoke of their work to have their rights and title asserted on unceded lands. The Athabasca Dene and Mikisew Cree of Northeastern Alberta are fighting for their very lives with the ongoing Tar Sands contamination of their aquifers and ecosystems which are creating a deadly epidemic of rare cancers among their population.

The struggles of the Wet’suwet’en and their allies are linked. The Tsilhqot’in are a neighboring nation fighting mining development not only on Fish Lake, but also on the historic site of hungry hill, a burial ground shared by both the Wet’suwet’en and the Tsilhqot’in peoples. Meanwhile, communities were represented from Tar Sands-impacted communities, from those resisting their devastating impacts at ground zero, to those resisting the construction of tar sands pipelines and refineries.

At present there are 7 pipelines planned to cross through the territory of the Wet’suwet’en First Nations, including the Gateway (Enbridge) and KSL pipelines, proposed to bring tar sands oil to the coast of BC. In response, the Unist'ot'en have set up a permanent camp on their territory where the proposed pipeline is set to be laid. Unfortunately as Carla Lewis, from the Gitdumden clan and band council member with the Wet’suwet’en First Nation pointed out, unwelcomed development is not something new on Wet’suwet’en territory.

“Many years ago the BC government allowed forestry companies to log on our lands with out the consent of our communities,” explained Lewis. ”Because of this, the logging was done with extremely unsustainable pratices bringing on environmental crisises such as the pine beetle. This would not have happened if our local knowledge and principles were used to decide the type of development here. We are not going to allow this same process to be repeated through these pipelines.”

The group marched confidently down the road parrallel to Highway 16 receiving honks of support from passing vehicles. One group called the Youth On Water Program with the Skeena Headwaters Conservation Coalition even stopped their van and joined in with the march.

“Part of the Youth on water project is to get the kids excited about rivers and to get them aware about the watershed,” described Florien Sherlock a facilitator with the group. “As part of that we were highlighting the concerns with both the proposed coal bed methane as well as the pipelines, so it was very fitting that we saw the march and were able to join in.”

Following the joyous chants of “Protect our Rights! No Enbridge Pipes!” the group made its way to the main street of Smithers. With quick professionalism, 5 members of the group hung a banner over the main street reading ‘No Pipelines’. Cars streamed underneath continuing their supportive waves and honks, while more bystanders joined in and gave comments of support.

“I think it’s fantastic. It is a large group of First Nation’s people with very definitive ideas,” commented Biz Bastien, a local resident in Smithers. “I saw the demonstration was about environmental issues and the tar sands and the Enbridge pipeline and them very definitively saying they don’t want either one and that they need their rights recognized and the voices heard. I think its fantastic to see them out there and I certainly support them.”

As the group rounded Main street they stopped at the local branch of RBC. The Royal Bank of Canada has been criticized for being the largest financier of the Tar Sands which undermine the Aboriginal rights of numerous Metis and First Nation communities including the Athabasca Chipewyan and Lubicon Cree. The Rainforest Action Network successfully campaigned Royal Bank to adopt the principle of Free, Prior and Informed Consent (FPIC) to guide their investment decisions, but the bank continues to fund tar sands projects.

“Open pit and In-situ mining devlopments have destroyed the land of the Athabasca Chipewyan and continue to poison our community members,” warned Suzanna Deranger, member of Athabasca Chipewyan First Nation. “Our community has never given consent for these projects so to ensure the principle of FPIC, RBC must stop all investments in tar sands projects including the pipelines crossing Wet’suwet’en territory!”

In front of the BC Ministy of Environment youth from the group impressed everyone as they held up a cardboard mimic of a pipeline with the words ‘Greed’ ‘Cultural Genocide’ and ‘Toxic Spills’ written on the side to convey what the pipeline threatens to bring to their future. In a powerful move, another group of youth ran at the cardboard pipeline with cut outs of salmon and paddles holding the words of ‘Love’ ‘Culture’ and ‘Language’ breaking apart the pipeline with a powerful metaphor that holds so much truth.

The final stop was at the CN rail station, another piece of infrastructure that crosses Wet’suwet’en territory and contributes to the tar sands giga project. Freda Huson finished the rally with a strong reminder “It is time for the Governments of Canada and B.C. to start honoring our traditional governance system of the ‘Unist’ot’en Chiefs. We have never ceded or surrendered our territory. Distruction of forest, waters, and wildlife will no longer be tolerated. True meaningful consultation must start taking place regarding all our territory.”

Onlookers admitted this type of demonstration is not something common in their small Northern town with a population of just over 5,000. But, the encouragement from the community suggests it may be a turning point with the Unist’ot’en leadership as they takie back their traditional role as protectors to take care of the land and create a healthy, safe, clean future for local people in the region.
§"Not your land, not your decision"
by Sheila Muxlow Monday Jul 19th, 2010 10:13 AM 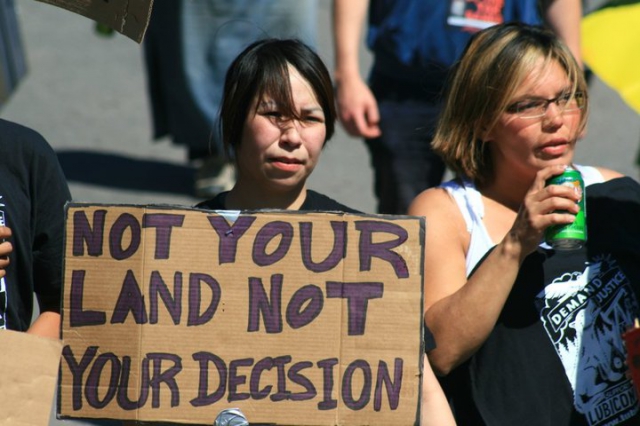 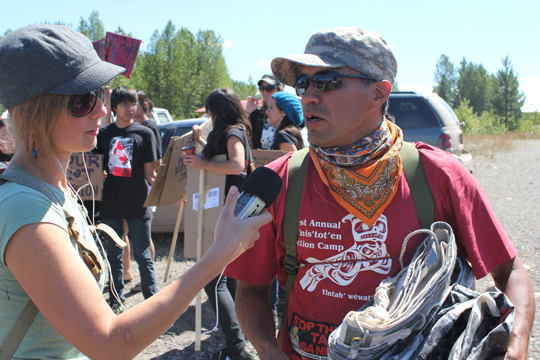