Add an Event
Newswire
Calendar
Features
Home
Donate
From the Open-Publishing Calendar
From the Open-Publishing Newswire
Indybay Feature
Publish to Newswire
Add an Event
Related Categories: U.S. | Global Justice & Anti-Capitalism
Black Congress, critical of Obama, to convene in D.C. to set black agenda
by UhuruNews
Friday Jun 25th, 2010 7:03 PM
As criticisms of President Obama’s war and economic policies mount, the group that first questioned his intentions regarding the concerns of the black community is holding a national Congress to define a black agenda to serve the interests of black people. 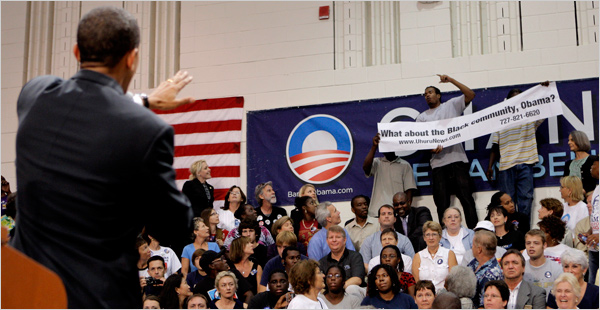 As criticisms of President Obama’s war and economic policies mount, the group that first questioned his intentions regarding the concerns of the black community is holding a national Congress to define a black agenda to serve the interests of black people.

From July 10–14, community activists from throughout the U.S. will converge on Washington, D.C. for the 5th Congress of the African People’s Socialist Party (APSP). An organization with philosophical roots in the teachings of Marcus Garvey and Malcolm X, the APSP will unveil its program to address the current crises facing black communities across the U.S., including the unprecedented loss of homes through the subprime fraud, skyrocketing unemployment reaching 50% in some urban areas, increasingly widespread accounts of police brutality and discriminatory incarceration in private for-profit prisons.

Under the banner of “One People! One Party! One Destiny!” the Congress will be convened by African Socialist International Chairman Omali Yeshitela, a veteran of the African liberation struggle. Yeshitela issues a call to black communities to get organized. “The worldwide economic and political crises we are witnessing today present a great opportunity for black people everywhere to take back the power to control our own destiny as a people. African workers must organize ourselves into our own independent organization and prepare to govern.”

Also present will be APSP-USA member Diop Olugbala who got worldwide media coverage when he represented the Party in publicly challenging Barack Obama during a campaign event in St. Petersburg, FL in 2008. Olugbala demanded to know why the then-presidential candidate would not denounce police violence and economic exploitation in African communities of the U.S., leading a chant, “what about the black community, Obama?”.

International allies of the black freedom struggle will also be present at the Congress, including Marcos Garcia, the Labor Attache of the Venezuelan Embassy; Ernesto Bustillos of Union del Barrio, a Chicano-Mexicano rights organization in southern California; and a representative of the Nicaraguan Embassy.

The Congress will take place at the Kellogg Center, located at 800 Florida Ave. NE on the Gallaudet University Campus in Washington, D.C. and is open to the public. For more information or to register, visit apspcongress.org or call 727-821-6620.
Add Your Comments
Support Independent Media
We are 100% volunteer and depend on your participation to sustain our efforts!