I audioed and videoed the Wednesday Drum Circle at various points from 3 PM to 6 PM.

Though initially apprehensive about playing there because of police surveillance and direct harassment, drummers gradually began to re-assemble--encouraged by the example of Miguel ("Lito") de Leon who was one of the first to resume drumming in spite of pressure from Sgt. Harms, Officer Forbus, and Officer Winston.

Jacob and Sean of Antioch Church arrived with comfort coffee. Ronee of the Road (as I call her) followed shortly after with more coffee, doughnuts, and a chess table. Ronee provides regular sustenance as well as company and community to folks outside on Sundays on the sidewalk beside downtown Borders on Pacific Avenue during the mid-afternoon.

DRUG WAR OVERKILL
Cops were involved for half an hour or more in interrogating and ultimately taking away one man accused of meth possession or use. A second African American man was held and grilled by cops blocking the parking lot and ultimately cited for marijuana possession. Sgt. Harms attempted to frighten the black guy by describing me as someone who'd broadcast his name and face all over the radio, but according to the "suspect" hadn't told him what he was being detained for.

Harms's often stonewalls uestions from onlookers about what "crime" is happening, saying he must "protect the privacy" of the suspect. Then when I ask the suspect is asked directly, the suspect says he hasn't been told either. Unless there's a crowd present, Harms and other cops, will often say "we've already told you" Such responses seem a strategy to insulate the police department from any direct public understanding what they're actually doing with taxpayer money.

I loudly discussed the senseless cost of two squad cars and six cops blocking the parking lot for so long a period over so trivial a set of charges. It seemed to me to be either intentional or oblivious harassment of those playing there. At a time of budget crisis, it seemed an inappropriate use of police resources. But then 8 more cops have been budgeted for and some assigned to the downtown area to deal with “crimes” such as poor people public assembly and the like.

An indymedia journalist tried to take pictures of the event but was directed to "move away" because he was "blocking" the road, a job subsequently taken up by two squad cars.

Sgt. Harms and his subordinates Forbus and Winston would occasionally stride over to the circle and caution a drummer or watcher not to smoke—though there are no store entrances within half a block and no one present there was complaining. The Smoking Ban, as predicted by activist Becky Johnson, seems to have become a pretext for harassing the poor and a specific tool for interfering with group activity which the police want to eliminate.

AUDIO AND FLYERS
I audioed people without incident giving their perspective on events (which I'll be playing Sunday morning at 10 AM on Free Radio Santa Cruz at 101.1 FM http://www.freakradio.org ). One man insisted I was a police agent, but then he always says that when I walk by him. Various members of the crowd encouraged him to document his case or lower the volume.

I gave out a flier announcing the May 22nd 5 PM meeting of the Street Performers Guild and supporters at Louden Nelson Center, as well as a copy o the “Unreasonably Disturbing Noise” ordinance (MC 9.36.020) which police are using under cover of citizen complaint to shut down musicians (not just drummers) downtown.

LONG MARCH OF THE DRUM CIRCLE
When I returned to the Drum Circle around 6 PM, I found one man chatting with Sgt. Harms and everyone else gone. Drummers informed me later that Harms had said he'd “gotten complaints” and “suggested” they move to the park across from the Town Clock.
I subsequently received reports by phone and e-mail from Blindbear and DrumCircle Dave. They said they played for about half an hour at the park, apparently with “permission” from the next-door business Serpent's Kiss (permission to play is not required in public places, police behavior notwithstanding), but then were told by police to move. They went across the street to the Town Clock where after a shorter period of time, they were approached by Officer Schonfield and another cop and told to move again.

On each occasion they weren't told to “follow the law' by playing more softly, but to shut down or move. This is a pattern that repeatedly appears on Pacific Avenue when Schonfield or other officers approach musicians—using this illegal demand. It may be an actual departmental policy or simply misunderstanding on the part of the officers. In any case, it is a form of unconstitutional intimidation under color of law.

The group then moved to the Eagle Statue plaza next to Jamba Juice, and got the same treatment from Schonfield and partner. The same treatment was repeated in front of New Leaf and in back of the Del Mar Theater, with the group diminishing in size. At 9 PM police ticketed them—at somewhere near Walnut and Pacific. Reportedly Blindbear and Patrick got tickets, though it's not clear for what—presumably MC 9.36.020.

Drum Circle Dave says he's scoping out plans for next week's deadly Drum Circle and will keep us briefed.

There's been regular discussion of the issue on my Free Radio Santa Cruz show, as mentioned above, but the latest is archived at http://www.radiolibre.org/brb/brb100513.mp3 (half an horu into the audio file).
§Clarifications and Minor Update
by Robert Norse Friday May 14th, 2010 2:27 PM
The meeting on Saturday May 22 at 5 PM at Louden Nelson is not specifically an official meeting of the Street Performers Guild formed last summer (that hasn't met since). Rather it is a meeting of street performers and their supporters to discuss issues including but not limited to police and city restriction/harassment of performers.


The Santa Cruz Sentinel presents the official police story on the two arrested near the Drum Circle:

2 arrested at drum circle for drugs
Two Santa Cruz residents were arrested on suspicion of drug possession after police officers allegedly saw them snorting an unknown substance at the drum circle near the downtown farmers market on Wednesday afternoon, police reported.
Michael Horn, 21, and James Ronald Sessons, 41, were in the parking lot at the corner of Elm and Cedar streets around 3:45 p.m. when officers approached them.
Horn was arrested on suspicion of possessing methamphetamine and drug paraphernalia, and also had a misdemeanor arrest warrant, police reported. Sessons was jailed on suspicion of possessing marijuana and drug paraphernalia.

Mike, the black guy, arrested and then released at the scene, had a different claim--that it was marijuana he was cited for. When Mike publicly asked Harms what he was being held for, the answer was "being in an area where drugs are sold" and "marijuana" as far as I remember. I'll be playing the audio I have of the event on Sunday at 10 AM so listeners can decide.
§Photos from May 12, 2010
by ~Bradley (bradley [at] riseup.net) Monday May 17th, 2010 1:49 PM 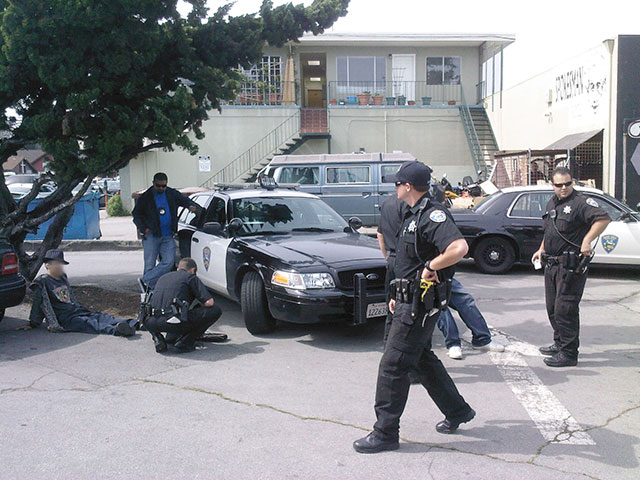 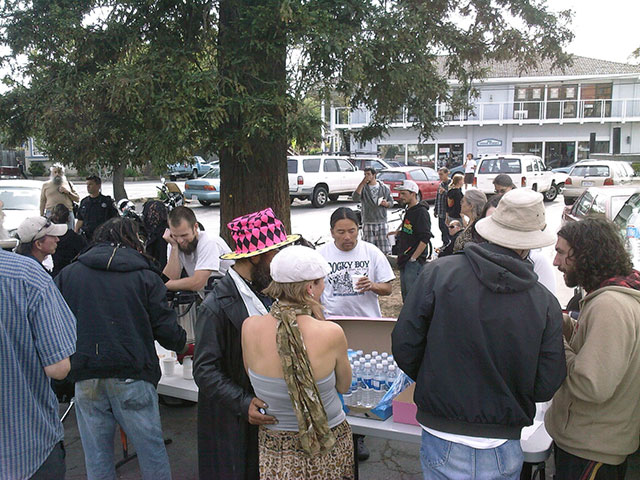 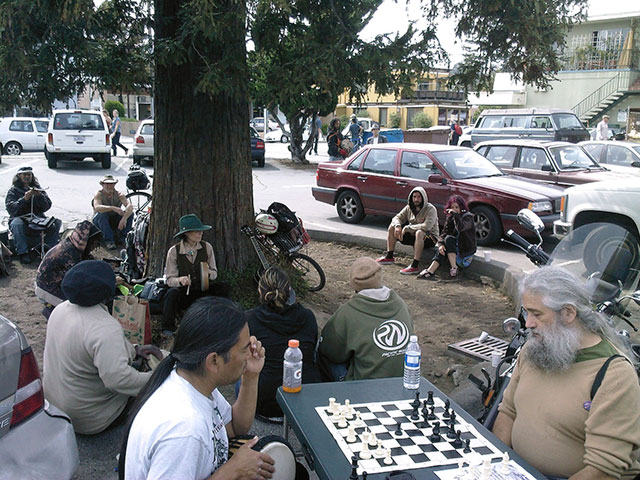 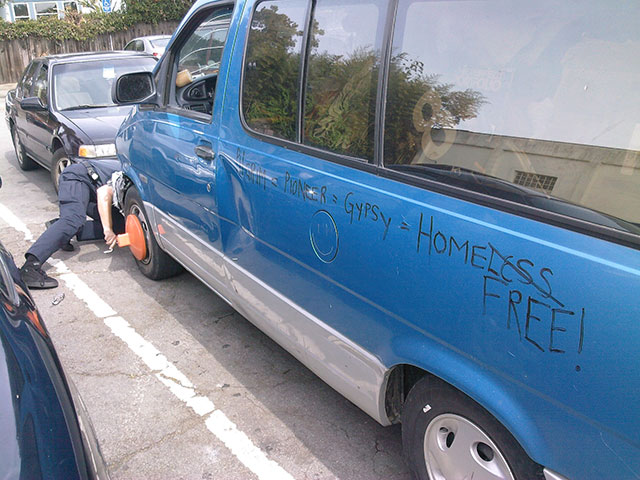