Add an Event
Newswire
Calendar
Features
Home
Donate
From the Open-Publishing Calendar
From the Open-Publishing Newswire
Indybay Feature
Publish to Newswire
Add an Event
Related Categories: International | Environment & Forest Defense
Greenpeace, Sea Shepherd criticize commercial whaling resumption proposal
by Takver - Australia Indymedia
Sunday Apr 25th, 2010 9:34 AM
Representatives to the International Whaling Commission from a dozen countries are meeting in Washington negotiating a compromise agreement for the limited resumption of commercial whaling with strong controls for the next ten years. Conservationists from both Sea Shepherd and Greenpeace have attacked the proposal, "At the moment, it appears that the whales are making all the concessions, not the whalers and this proposal keeps dying whaling industries alive and not the whales." said Greenpeace Japan Programme Director Junichi Sato. 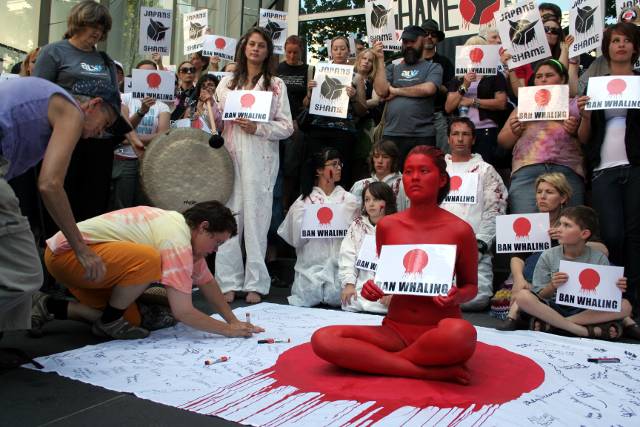 The current compromise deal being negotiated behind closed doors would halve the current quotas by Japan, Norway and Iceland and disallow new countries from whaling; all international trade in whale products would be banned; whale-watching ships would be monitored; accurate reporting of time of death and means of killing of all whales; and DNA samples of all whales killed would be reported to a central registry to assist tracking of whale meat. Limited subsistence whaling by indigenous peoples would also be allowed to continue in the United States, Greenland, Russia and St. Vincent and the Grenadines. Further changes are possible and the proposal must win the approval of three-quarters of the members of the International Whaling Commission (IWC) at its annual meeting in Agadir, Morocco, in late June 2010.

The American delegate to the IWC, and official of the National Oceanic and Atmospheric Administration (NOAA) Monica Medina told the New York Times that the conservationist demand for a complete ban on whaling was an impossible goal. “We can’t stop it; we can only try to control it,” she said. “If we can prevent thousands of whales from being hunted and killed, that’s a real conservation benefit. This proposal would not only help whales, we hope, but also introduce rigorous oversight, halt the illegal trade in whale meat and bring respect for international law back to the IWC,” she added. “Are we there yet? We’re not, and we have hard negotiations to go yet.”

Philip Radford, executive director of Greenpeace USA took the opportunity to raise whaling at an Earth day function at the White House to put some pressure on President Obama, "What is your plan to change your administration's position?" he informally asked, "Look," said the president, "I love whales. I will do what I can to protect them." But the President failed to articulate any change in the administration's negotiating position in the IWC.

Sir Geoffrey Palmer, former prime minister of New Zealand and chairman of the IWC went further and said “The IWC is a mess. It’s a dysfunctional international organization. I think this is probably the last chance the IWC has to cure itself.”

Australian Environment Minister Peter Garrett said Australia will not support the proposal. "We'll look at the IWC statement carefully but on face value it falls very well short of any outcome that Australia could ever accept, and I repeat what we've said all through this process and that is that Australia remains resolutely opposed to commercial and so-called scientific whaling," he told the ABC. Australia has said if a diplomatic solution to end whaling cannot be found, that international legal action would be launched before the commencement of the next whaling season in December 2010.

New Zealand Foreign Minister Murray McCully has also blasted the IWC proposal as unacceptable to New Zealand and a backward step in the process to find a diplomatic solution as anti-whaling protestors gathered outside the beehive in Wellington to voice their opposition to any compromise deal.

Conservation organisations have rejected the deal being negotiated out of hand.

"IWC members now must take this proposal forward, end commercial whaling and transform the IWC into a body that conserves and not just manages whales." said Greenpeace campaigner Sato.

“Two years ago, Greenpeace presented evidence detailing widespread corruption and embezzlement within Japan’s senseless whaling industry. Instead of investigating these allegations, the Japanese government chose instead to put me on trial along with one of my colleagues. As someone being charged, I will pay a high price for my personal stance and actions to bring my government’s senseless hunt to an end, I hope that IWC member countries will this year have the courage to make a deal that really works for the whales." said Sato, one of two Greenpeace Japan activists presently on trial for exposing corruption in Japan's whaling industry.

Sea Shepherd Conservation Society also rejected the notion of resumption of commercial whaling compromise being brokered by nations like New Zealand and the United States with Japan. Captain Paul Watson said “Just what is it about this word ‘sanctuary’ that people don’t understand. Sanctuary means no killing, it means protection, it means refuge, it means asylum, and we intend to protect the whales within the sanctuary with all the resources available to us.”

Commercial whaling in the waters south of sixty degrees is a violation of the Antarctic Treaty. “The killing of even one whale is a violation of international conservation law,” said Captain Paul Watson. “In addition to protecting the lives of individual whales we are also defending the integrity of the Southern Ocean Whale Sanctuary. Whaling ships from Japan or anywhere else have no legal right to kill whales within the Sanctuary.”

Sea Shepherd has vowed to return to the Southern Ocean Sanctuary unless a kill quota of zero whale kills is established. “I am amazed that these nations are negotiating with poachers,” said Captain Watson. “They don’t negotiate with elephant poachers, shark finners, and drug traffickers, so why do the Japanese whalers get special consideration? The answer of course is that Japan is an economic power and makes demands backed up by economic pressure.”

“If they push compromise, we will answer with confrontation,” Captain Watson said, “New Zealand claims that the compromise will cut the kill quota in the Southern Ocean in half. We have already cut it in half so the compromise will achieve nothing additional. We’re not satisfied with half, we want 100% protection, nothing less. If the compromise cuts the quota in half than we will return to cut the reduced quota in half, or more than half. We will not quit the sanctuary until the last harpoon is retired.”

Sea Shepherd claims the intervention by the three ships of the Sea Shepherd Conservation Society in the last season saved 528 whales, preventing the Japanese whaling fleet achieving a self imposed kill quota of 935 Minke whales, 50 endangered fin whales and 50 endangered humpback whales. The whalers failed to take any humpback whales, only one fin whale, and 506 Minke whales.

“We hit them long and hard this year and all our efforts and risks have paid off. There are now 528 whales swimming freely in the Southern Ocean that would now be dead if not for the fact that we intervened. It is a happy day for my crew and I and conservationists worldwide, a happy day indeed.” said Paul Watson.

Sea Shepherd is currently repairing damage to the Bob Barker, searching for a potential replacement for the destroyed Ady Gil, and working to help defend Captain Pete Bethune who remains a prisoner of the whale wars in Japan. “Ships are expendable, endangered and protected whales are not. We lost a ship and we have one crewmember taken prisoner, and no injuries were caused nor sustained. I think we did bloody well this year. Now we need to re-organize, raise more funds, repair and prepare the ships and go back in December to do an even better job.” said Paul Watson.

During the end of April the Sea Shepherd’s flag ship, the Steve Irwin, is making a brief stop in the United States before continuing on to the Mediterranean to commence with the upcoming campaign to defend critically endangered bluefin tuna populations.

Whales and Climate Change: the role of Whale poo in absorption of CO2

While back room deals are being negotiated for resumption of commercial whaling, latest research is highlighting the complex interaction of whales and whale poo in the productivity of the entire Southern Ocean ecosystem and the ocean's ability to absorb CO2, impacting climate change.

Whales and krill play a key role in the recycling of iron in the top layer of the ocean. Iron is a critical element in the ocean that enables the production of aquatic plants - algae - which absorb carbon dioxide (CO2).

"We found that krill concentrated the iron they consumed in their bodies and because they swim near the surface, they keep the iron in the top layer of the ocean," Dr Nicol said. "Approximately 24% of the total iron in the Southern Ocean surface water is currently stored within krill body tissue."

According to the Australian Antarctic Division and the Antarctic Climate and Ecosystems Cooperative Research Centre (ACE CRC) the most recent estimates of krill biomass in the Southern Ocean is 379 million tonnes, storing about 15,000 tonnes of iron.

"When whales consume the iron-rich krill, they excrete most of the iron back into the water, therefore fertilising the ocean and starting the whole food cycle again," Dr Nicol said.

So the whale poo is highly concentrated in iron providing a perfect basis for algae to grow drawing down atmospheric CO2 "The baleen whales' faecal iron concentration is calculated to be about 10 million times that of Antarctic seawater," he said.

Of course it is no surprise that this information is coming from non-lethal whaling research rather than the fake research being conducted on a yearly basis to disguise commercial whaling by the Japanese whaling fleet under an International Whaling Commission loophole.