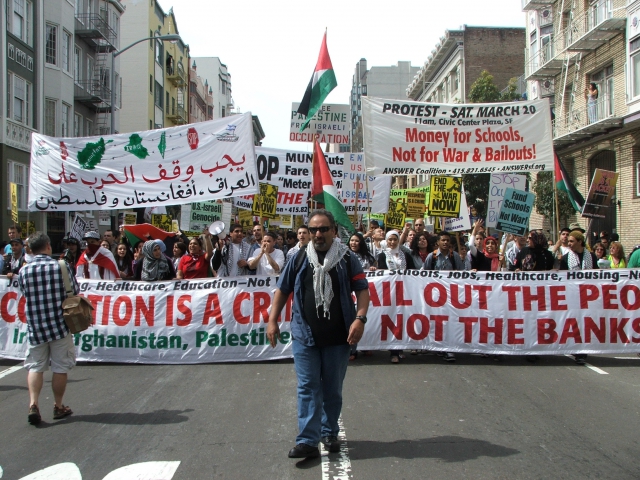 OAKLAND, CA - Several thousand marched and rallied Saturday in downtown San Francisco against the wars and occupations in Iraq and Afghanistan. On this first day of Spring, the anti-war movement demonstrated some signs of revival with one of the larger protests in recent years.

The mobilization was notable not only for it's greater size, which organizers estimated at 5,000, but also for it's diversity. The crowd was both younger and more multiracial.

The protest marked seven years since the invasion of Iraq and was part of a national day of action which included marches in Washington, D.C. and Los Angeles, as well as a number of smaller actions across the country.

A labor rally organized by U.S. Labor Against the War began the day's activities at 10 a.m. with a rally inside the Plumber's Union Hall on Market Street. A faith-based contingent held a rally at 10:30 a.m. By noon, the labor and faith-based contingents, along with a contingent of students, teachers, and parents, had joined the main pre-march rally in Civic Center.

The main march kicked-off around noon behind a lead banner that read, “Occupation is a Crime: Iraq, Afghanistan and Palestine” and ”Bail Out the People Not the Banks.” Marchers chanted, “Hey hey, ho ho, the occupations have got to go!”

In front of even the lead banner strode a contingent of Native Americans and their supporters calling for parole for Leonard Peltier, the long imprisoned leader of the American Indian Movement. It was one of many contingents which brought up issues beyond the Iraq and Afghan wars.

A vibrant contingent at the front of the march, called for an end to the Israeli occupation of Palestine. A youthful contingent called for a withdrawal of the U.S. military from the Philippines. Another expressed solidarity with Latin America. Banners were carried by Asian Americans for Peace and the Chinese Progressive Association. Veterans for Peace, Military Families Speak Out, and Code Pink, were also represented, as were many other groups too numerous to name.

There was a smattering of labor representation, including banners for Painters and Tapers Local 913 and UNITE HERE Local 2. The march was endorsed by both the San Francisco and Alameda County Central Labor Councils AFL-CIO, in addition to U.S. Labor Against the War.

Marchers met with generally favorable response from onlookers as they snaked their way through downtown San Francisco. Many took photos and leaflets, others looked out of windows and flashed peace signs. Many passing vehicles honked in support.

Organizers made efforts to connect issues. As the march passed The Hilton Hotel, which is demanding concessions from it's employees, the march's solidarity with UNITE HERE Local 2's struggle with Hilton was announced and a chant was taken up, “Hilton says give back, We say fight back!” Some of the hotel's workers cam out to greet marchers with smiles and hand shakes.

The speakers list consisted almost entirely of local leaders and activists. There were no celebrities and virtually no elected officials, with the exception of a brief welcome by S.F. Supervisor Ross Mirkarimi . S.F. Supervisor Eric Mar participated in the march.

The protest differed from ones held prior to the election of President Obama in that it lacked the personification of evil war makers (i.e. President Bush and Vice-President Cheney) who are easy targets for lampooning and righteous condemnation.

The day's activities were organized by a coalition of many anti-war groups. The initial calls to action were issued by A.N.S.W.E.R. Coalition [ http://www.actionsf.org ] and the National Assembly to End the Iraq & Afghanistan Wars and Occupations [ https://www.natassembly.org/Home_Page.html ]. It was taken up by other anti-war coalitions such as Bay Area United Against War [ http://www.bauaw.org/ ], U. S. Labor Against the War [ http://uslaboragainstwar.org ], Code Pink [ http://www.codepinkalert.org ] and Not In Our Name [ http://www.notinourname.net ].

The coalition, “worked exceedingly well together,” according to Richard Becker, West Coast Coordinator for A.N.S.W.E.R. Coalition. Becker estimated the turnout at 5,000, which he said, “was about what we were hoping for.” “It was the biggest in a couple of years,” he said.

“The anti-war movement is transitioning into a movement that engages in many social justice struggles,” said Becker. He said that A.N.S.W.E.R. Coalition's next two actions will be on budget cuts and immigrant rights. 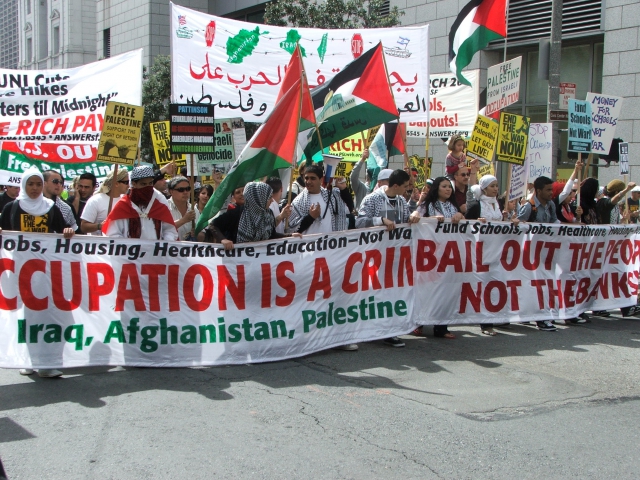 original image (2272x1704)
Banner reads, “Occupation is a Crime: Iraq, Afghanistan and Palestine” and ”Bail Out the People Not the Banks.” 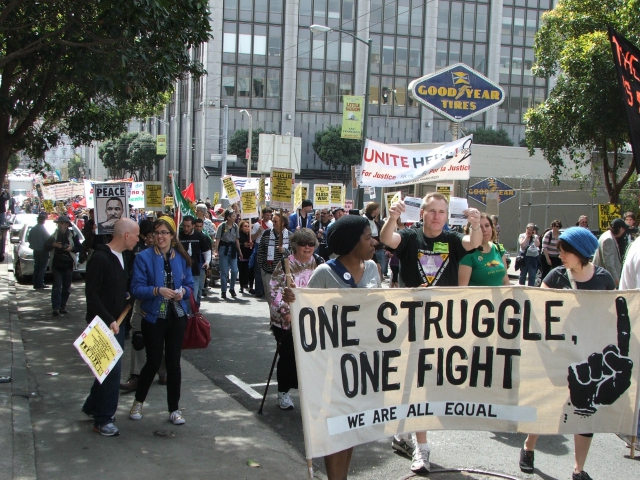 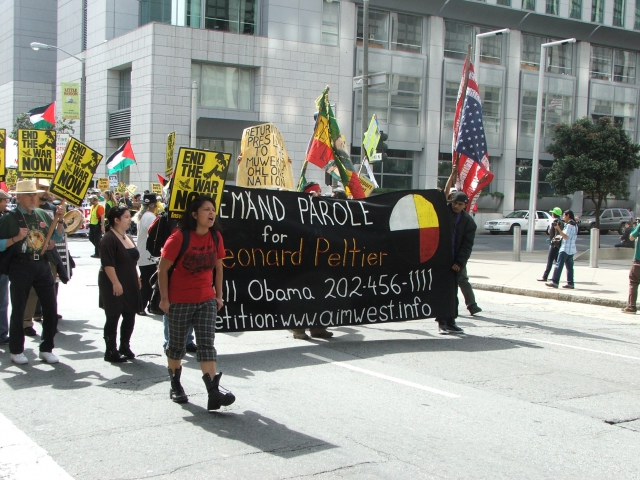 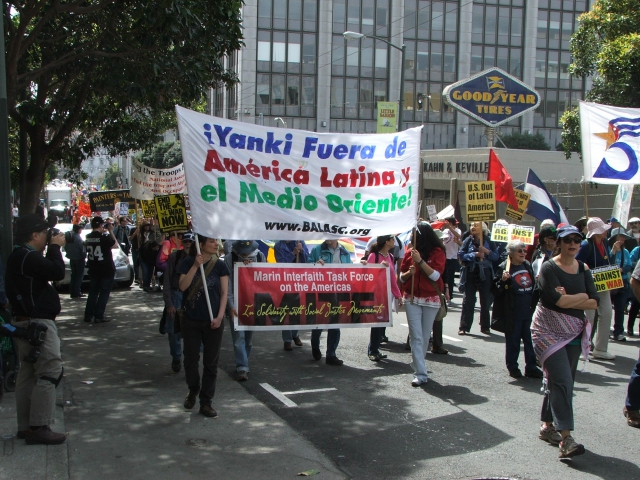 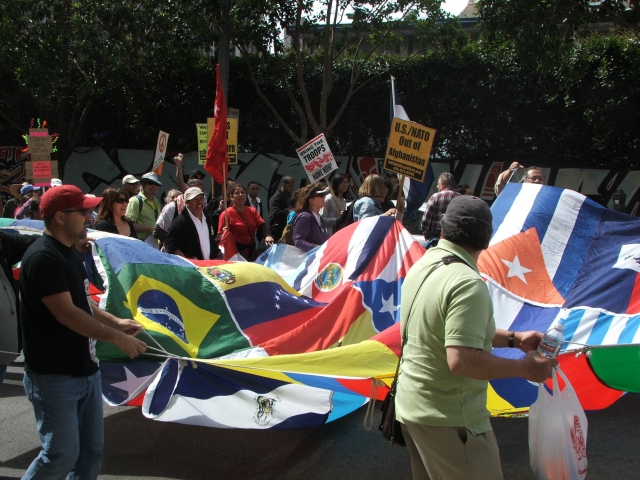 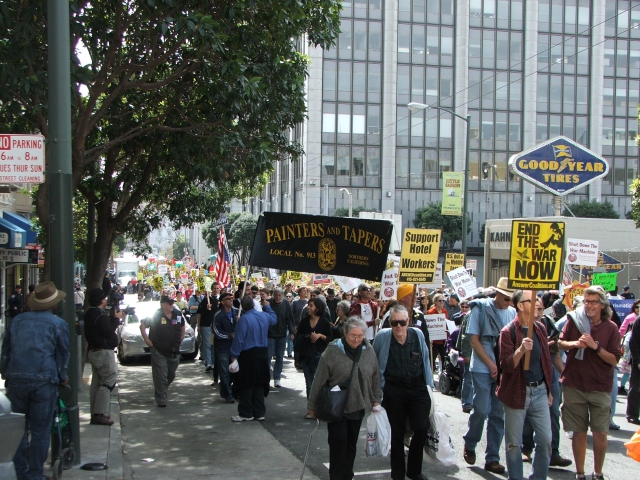 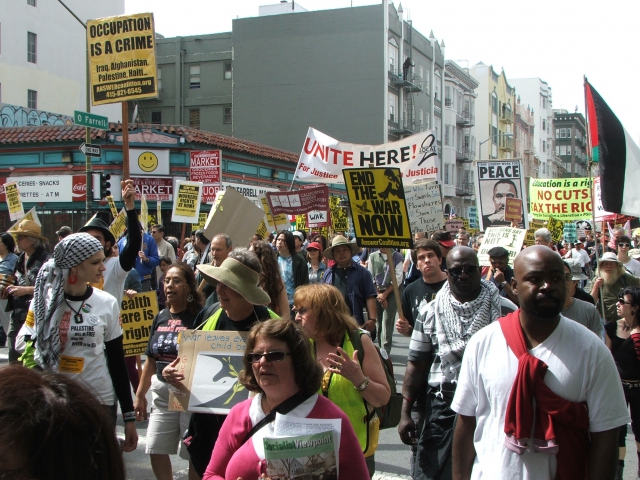 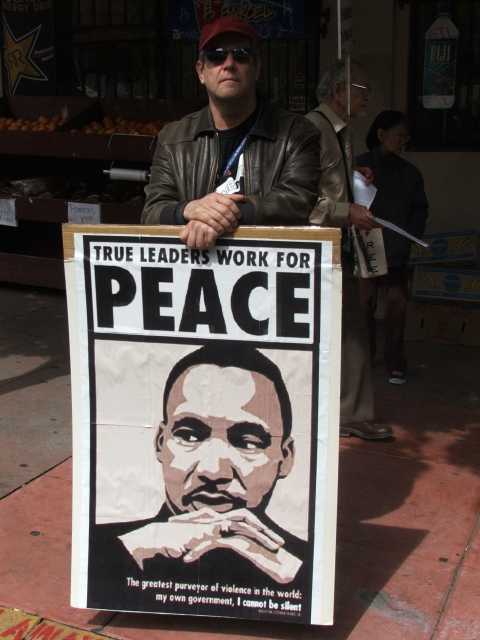 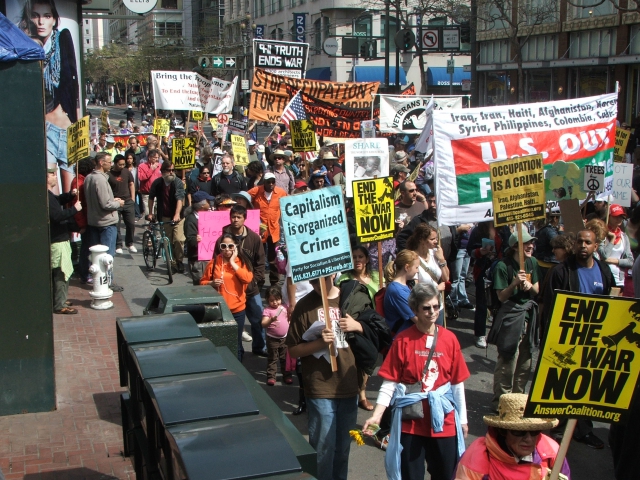 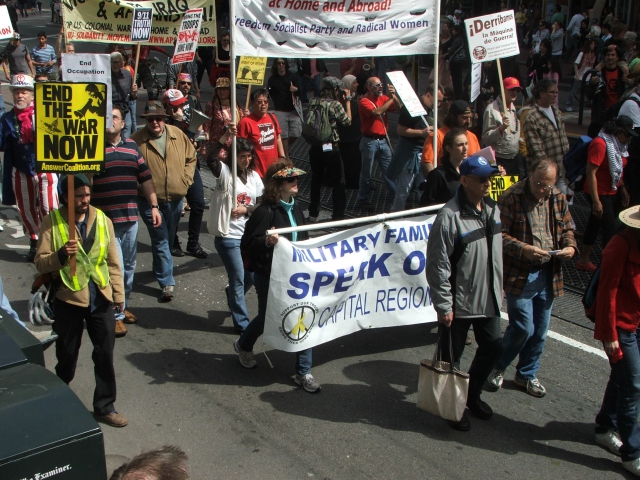 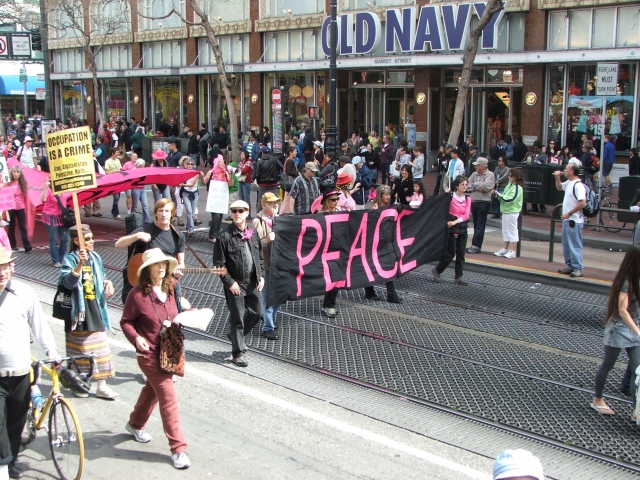 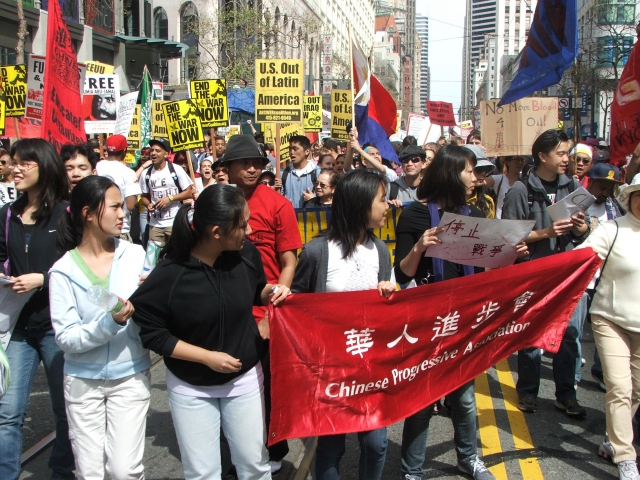 original image (2272x1704)
photo: Jonathan Nack
Add Your Comments
Support Independent Media
We are 100% volunteer and depend on your participation to sustain our efforts!