Photo: Schwarzenegger greenwashes his abysmal environmental record during a photo opportunity at the green expo at the 2010 Green California Summit in Sacramento on March 16. 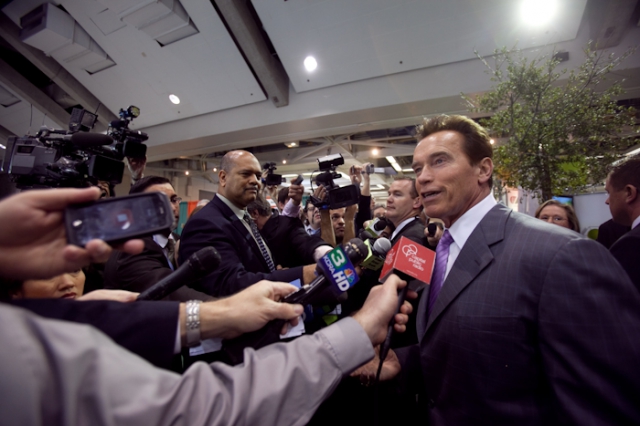 Arnold Schwarzenegger, true to his record as the worst Governor in California history for fish and the environment, has appointed four backers of the peripheral canal/tunnel to the Delta Stewardship Council that will oversee the implementation of the water package that was rammed through the Legislature by Schwarzenegger and Senate President Pro Tem Darrell Steinberg (D-Sacramento) last November.

"The Delta Stewardship Council was established as part of last year's groundbreaking legislation to reform, restore and rebuild California's vital water system," Schwarzenegger claimed. "This council will work collaboratively to develop a plan to achieve the co-equal goals of restoring the Delta ecosystem and ensuring water supply reliability."

What Schwarzenegger failed to mention was that these "co-equal goals of restoring the Delta ecosystem and ensuring water supply reliability" are the same ones that led the Cal-Fed program down the path of disaster while hundreds of millions of dollars were wasted on bogus "restoration" programs that did nothing to stop the decline of Central Valley salmon and steelhead and Delta smelt.

Schwarzenegger gushed, "Each of these individuals possesses the qualities, experiences and unique perspectives that are necessary to help the council meet these goals and implement the most comprehensive effort in decades to save and restore California's Delta and secure our water supply for the future."

The only truth in this statement is that you can be sure that the corporate players and political hacks whom Schwarzenegger has appointed to the Council will do everything they can to secure their "water supply for the future" while driving Central Valley and other fish species over the abyss of extinction.

The Sacramento River fall Chinook salmon population has declined from nearly 800,000 fish in 2002 to only 39,500 fish in fall 2009, while Delta smelt, longfin smelt, Sacramento splittail, juvenile striped bass and threadfin shad have declined to record low population levels in recent years. Massive water exports to corporate agribusiness in the San Joaquin Valley and southern California water agencies have played the key role in the collapse of all of these once abundant fish species.

Of course, Schwarzenegger didn't appoint any Delta residents, fishermen, Indian tribal members, independent scientists or any of those who want to restore the Delta and its imperiled fisheries. By appointing a San Joaquin Valley agribusiness owner, a lobbyist for the Irvine Water District, a bio-tech corporation executive and a lawyer for a corporate "environmental" NGO, Schwarzenegger is ensuring that the peripheral canal will be built and the interests of corporate agribusiness, the biotech industry and southern California water companies are served to the detriment of the Delta, its fish and its people.

The latest appointments are just more examples of the corruption and conflicts of interest that have resulted in Schwarzenegger receiving a 71 percent unfavorable rating by a recent field poll of California residents.

On March 21, Matt Weiser of the Sacramento Bee disclosed how “the leader of the state's largest water pollution regulator is married to a lobbyist for agencies it regulates, a potential conflict of interest she did not disclose publicly until an ethics complaint was brought against her ((http://www.sacbee.com/2010/03/21/2622315/water-pollution-regulator-failed.html).

The state's Fair Political Practices Commission is investigating a 51-page complaint filed by the California Sportfishing Protection Alliance (CSPA), against Katherine Hart Johns, chair of the Central Valley Regional Water Quality Control Board. CSPA alleges that she failed to disclose, as mandated by the Political Reform Act, that her spouse was a registered lobbyist receiving substantial income from entities regulated under the Porter-Cologne and the federal Clean Water Act

Fishing and environmental groups have also blasted Schwarzenegger for appointing to the Marine Life Protection Act (MLPA) Blue Ribbon Task force officials from the oil, real estate and marina development industries who have a vested interest in the how marine reserves are designated and implemented. It is no coincidence that Katherine Reheis-Boyd, the president of the Western States Petroleum Association, is chair of the task force for the South Coast and serves on the North Coast panel at a time when Governor Arnold Schwarzenegger and the oil industry want to install more oil rigs off the California coast.

On the same day that Schwarzenegger named his four council members, Senator Steinberg nominated former State Senator Patrick Johnston of Stockton to the council. Outdoing Assembly Speaker Karen Bass appointed Gloria Gray, a former hospital administrator who sits on the board of directors of the Metropolitan Water District of Southern California, to the panel earlier this month. Finally, Don Nottoli, a member of the Sacramento County Board of Supervisors, is automatically on the committee as head of the Delta Protection Commission.

Since this panel has only seven members, the four members appointed by Schwarzenegger will have the majority vote and will be able to bring to fruition the Governor's agenda of building a peripheral canal and new dams unless those that care about California's fish populations and the communities that depend upon them rise up in a massive show of resistance!

Shame On the Riverkeeper for Greenwashing Schwarzenegger’s War on Fish!

As Schwarzenegger continues to appoint tainted officials to state boards and councils that will further his war on salmon and salmon fishermen, the Hudson Riverkeeper will "honor" Schwarzenegger for his "environmental advocacy" at the "Riverkeeper's Annual Fishermen's Ball" on April 14 in New York City.

How can the Riverkeeper possibly honor the Governor who continually campaigns for the construction of a peripheral canal and more dams, who has constantly slashed the budget for Department of Fish and Game biologists and game wardens, who has attacked Endangered Species Act protections for Delta smelt and Central Valley salmon and who has eviscerated the California Environmental Quality Act (CEQA)?

If the Riverkeeper leadership has any integrity, they should withdraw their invitation to Schwarzenegger to be "honored" at their event. They should then apologize to the recreational anglers, commercial fishermen, California Indian Tribes, Delta farmers, conservationists and environmental justice advocates who have suffered from Schwarzenegger's continuous attacks on fish, fishermen and the environment.

Finally, when Robert F. Kennedy Jr., Vice Chair and Chief Prosecuting Attorney for the Riverkeeper and Chairman of the Waterkeeper Alliance, goes to California next time he should meet with fishermen and other fish restoration advocates to find out the truth about what Schwarzenegger's "environmental advocacy" has done to Central Valley salmon and Delta fish populations and fishing communities throughout the state.

I urge you to write, call and email the Riverkeeper to let you know them how you feel about the Riverkeeper's honoring of the "Fish Terminator" at: 828 South Broadway, Tarrytown, NY 10591, Phone: 800-21-RIVER, Email: info [at] riverkeeper.org.

Here's the link and announcement of the event honoring the "Fish Terminator":

Below is the press release from the Governor's Office:

"The Delta Stewardship Council was established as part of last year's groundbreaking legislation to reform, restore and rebuild California's vital water system. This council will work collaboratively to develop a plan to achieve the co-equal goals of restoring the Delta ecosystem and ensuring water supply reliability," said Governor Schwarzenegger. "Each of these individuals possesses the qualities, experiences and unique perspectives that are necessary to help the council meet these goals and implement the most comprehensive effort in decades to save and restore California's Delta and secure our water supply for the future."

Fiorini, 56, of Turlock, has been managing partner of Fiorini Ranch since 1975 and managing partner of FarmCo since 2001. Previously, he was president of Fiorini Family Vineyards from 2002 to 2008 and owner of Farm Data from 1984 to 2000. Fiorini is past president and board member of the Association of California Water Agencies, past board president and director of Turlock Irrigation District Division #5, and past president and board member of the California Farm Water Coalition. He earned a Bachelor of Science degree in fruit science from California Polytechnic State University, San Luis Obispo. This position requires Senate confirmation and the compensation is $40,669. Fiorini is a Republican.

Isenberg, 71, of Sacramento, has served as president of Isenberg/O'Haren Government Relations since 2005. From 1977 to 2004, he was counsel for Miller, Owens and Trost, Attorneys at Law. Previously, Isenberg served as a member of the California State Assembly representing the 9th District from 1992 to 1996 and the 10th District from 1982 to 1992. From 1975 to 1982, he was mayor of the city of Sacramento. Isenberg served as chair of the California Marine Life Protection Act Blue Ribbon Task Force from 2004 to 2006 and served as chair of the Delta Vision Blue Ribbon Task Force from 2007 to 2008. He is also a member of the Sacramento Valley Conservancy Advisory Board. Isenberg earned a Juris Doctorate degree from the University of California, Berkeley Boalt Hall School of Law and a Bachelor of Arts degree in social science and government from California State University, Sacramento. This position requires Senate confirmation and the compensation is $40,669. Isenberg is a Democrat.

Nordhoff, 68, of Del Mar, was president and chief executive officer of Gen-Probe Incorporated from 1994 until his retirement in 2009. Currently, he serves as chairman. From 1992 to 1994, Nordhoff served as president and chief executive officer of TargeTech and, from 1988 to 1992, he was president and chief executive officer of American Biogenetic Sciences. From 1986 to 1988, Nordhoff was vice president of mergers and acquisition for Sterling Drug Company and from 1970 to 1986, he worked for Pfizer Inc. in the U.S., Europe and Asia. His last position at Pfizer was director of licensing and business development. Nordhoff earned a Master of Business Administration degree in international business and finance from Columbia University and a Bachelor of Arts degree in international relations and political economy from Johns Hopkins University. Nordhoff served in the U.S. Navy from 1963 to 1967. This position requires Senate confirmation and the compensation is $40,669. Nordhoff is a Republican.

Roos-Collins, 56, of Berkeley, has been director of legal services for the Natural Heritage Institute Since 1991. Previously, he served as deputy attorney general of the public rights division for the California Department of Justice from 1989 to 1991. From 1986 to 1989, Roos-Collins was attorney-advisor for the Office of the General Counsel at the U.S. Environmental Protection Agency. He is co-chair of the Agricultural Water Management Council and a member of the Bay Delta Conservation Plan Steering Committee. Roos-Collins is also director of the Pacific Forest and Watershed Lands Stewardship Council and founding director of the Hydropower Reform Coalition. He earned a Juris Doctorate degree from Harvard Law School and a Bachelor of Arts degree in English from Princeton University. This position requires Senate confirmation and the compensation is $40,669. Roos-Collins is a Democrat.

The Delta Stewardship Council was created in SBX7 1 by Senator Joe Simitian (D-Palo Alto), which established the framework to achieve the co-equal goals of providing a more reliable water supply to California and restoring and enhancing the Delta ecosystem.

The Council is tasked with:

Developing a Delta Plan to guide state and local actions in the Delta in a manner that furthers the co-equal goals of Delta restoration and water supply reliability;
Developing performance measures for the assessment and tracking of progress and changes to the health of the Delta ecosystem, fisheries, and water supply reliability;
Determining if a state or local agency's project in the Delta is consistent with the Delta Plan and the co-equal goals, and acting as the appellate body in the event of a claim that such a project is inconsistent with the goals; and
Determining the consistency of the Bay-Delta Conservation Plan (BDCP) with the co-equal goals.