Striped bass, rather than being a "cause" of the Delta smelt and Central Valley salmon population crash, are victims of the same massive water exports and agribusiness pollution that have resulted in the collapse of salmon, Delta smelt, longfin smelt, threadfin shad, green sturgeon and other Delta fish populations. An alarming report released by UC Davis Professor David Ostrach in 2008 documented the maternal transfer of pollutants to striped bass fry in Central Valley rivers and the California Delta, resulting in stunted and deformed fry (http://www.indybay.org/newsitems/2008/12/08/18554034.php). 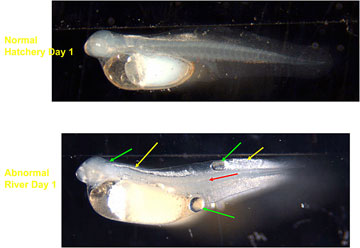 Striped Bass Eradication Bill to be Heard on April 13

Corporate agribusiness, in yet one more attempt to divert attention from the key role that water exports have played in the collapse of Central Valley salmon and Delta smelt populations, is trying to push a bill removing fishery protections from striped bass through the Legislature.

The Assembly Water, Parks and Wildlife Committee will hear AB 2336, the "striped bass eradication bill" sponsored by Assemblywoman Jean Fuller (R-Bakersfield), on Tuesday April 13th at 9:00 am in Room 437 on the Assembly side of the State Capitol. Everybody who cares about striped bass and other collapsing fish populations on the embattled California Delta should attend this hearing and write letters to show their opposition to this bill.

"Here we have another back door attempt by corporate agribusiness to bypass the state regulatory agencies," said Mike McKenzie of the California Sportfishing Protection Alliance (CSPA). "If they are successful using these tactics, they will soon be after every game fish in the state. As an angling community that does not support this bill we need to, once again, pack the hearing room and the hallways with as many people as we possibly can."

Assemblymember Fuller has introduced AB 2336 to "terminate the management and protection of the public’s striped bass fishery" that inhabits the Bay-Delta estuary, according to John Beuttler, CSPA conservation director. The bill mandates the elimination of all regulations that govern the legal harvest of the fishery thereby eliminating its sport fishing protective status. Even though this would virtually destroy the fishery, the author alleges this is necessary to reduce striped bass predation on salmon and Delta smelt protected by the state and federal Endangered Species Acts.

"This bill is similar to the one the Fuller introduced last year that was defeated by a coalition of anglers who care about the fishery and that acted in concert with sportfishing and environmental groups lead by CSPA," said Beuttler. "That bill was killed in its first committee hearing because the false arguments used by the author significantly overstated the impact of striped bass predation. Scientific testimony provided during the hearing made it clear that striped bass rarely, if ever, eat Delta smelt and that predation on listed salmon is so low that it does not impact the population level of the listed salmon."

Beuttler noted that this bill is different in that it calls for the elimination of “the program enhancement, expansion or improvement of the fishery."

"CSPA finds it absolutely arrogant that Fuller and her bill’s supporters would advocate the destruction of this valuable public resource again!" continued Beuttler. "Why should they be allowed to usurp the professional management and legal authority the government has given the Department of Fish & Game and the federal fishery agencies to protect listed species? The fishery agencies and their scientists know a great deal more about the striped bass fishery and the impacts it has on species of concern. They also understand and what it means for fisheries to co-exist in a dynamic estuarine ecosystem."

Beuttler asked, "So, why are the bill’s proponents focused on destroying the striped bass fishery instead of dealing with the huge problems caused to all the fisheries dependent on the estuary for survival? Why aren’t they fixing the problems cause by the state and federal water projects that have destroyed the estuary’s natural hydrology and the resiliency of its ecosystem? Why aren’t they immediately reducing the significant over allocation of the public’s water exported out of the Delta?"

The bill’s supporters all appear to be agribusiness interests dependent on water exported from the Sacramento-San Joaquin River Delta, the largest estuary on the West Coast of the Americas. This attack is simply another cynical way to misdirect the government away from the real causes of the Central Valley salmon and Delta smelt collapse - massive water exports to corporate agribusiness and southern California, declining water quality and the failure of the state and federal governments to install state-of-the art fish screens at the Delta pumps.

The striped bass eradication bill was introduced as one of a series of recent attacks by corporate agribusiness and their allies against Central Valley salmon and Delta fish populations. These include Governor Arnold Schwarzenegger's campaign to build a peripheral canal and new dams and Senator Dianne Feinstein's sponsoring of an amendment to bypass Endangered Species Act (ESA) protections for Sacramento River chinook salmon, Central Valley steelhead, green sturgeon, Delta smelt and southern resident killer whales.

The Coalition for a Sustainable Delta, an "Astroturf" organization that is comprised of San Joaquin Valley water agencies linked to agribusiness tycoon Stewart Resnick, has also launched a lawsuit against the California Department of Fish and Game to remove fishing regulations that protect stripers supposedly to "protect" Central Valley salmon and Delta.

Striped bass have successfully coexisted with salmon and Delta smelt since being introduced to the estuary from the East Coast in 1878. Stripers, rather than being a "cause" of the Delta smelt and Central Valley salmon population crash, are victims of the same massive water exports and agribusiness pollution that have resulted in the collapse of salmon, Delta smelt, longfin smelt, threadfin shad, green sturgeon and other Delta fish populations. An alarming report released by UC Davis Professor David Ostrach in 2008 documented the maternal transfer of pollutants to striped bass fry in Central Valley rivers and the California Delta, resulting in stunted and deformed fry (http://www.indybay.org/newsitems/2008/12/08/18554034.php).

CSPA is calling on anglers and the public to help us make another legislative stand by raising your voice in opposition to the Fuller bill. The Committee must have the letters by no later than April 7, 2010 - the Committee’s FAX number is 916-319-2196.

McKenzie noted that there will most likely be (as before with AB1253 last year) little time for anyone to speak other than to line up at the microphone and state that one does not support the bill. "If we get a good turn out with lots of live bodies, we could have a fair chance of stopping this bill at the hearing," he stated. "We also need as many people as possible to write or Fax the Committee, letters against the bill." For more information, go to http://www.calsport.org.

In addition to the sending a letter or FAX to the committee that will hear the bill, please remember the CSPA needs your financial support to continue their efforts to protect and restore California’s imperiled fishery resources. CSPA is a fantastic organization that constantly stands up in the Legislature, court and water board hearings for our embattled fish populations and fishing communities. Send what you can afford to support these efforts by using Pay Pal, http://www.calsport.org/paypal.htm, or mail your contributions to: CSPA, 6597 Cane Lane, Valley Springs, CA 95252.

A sample letter is below - using your own words to paraphrase the letter would be most effective:

Re: My Opposition to AB 2336 (Fuller) - Striped Bass Eradication

Chairman Huffman and Members of the Committee:

I am writing to express my complete opposition to AB 2336. I’m outraged over supporters of the bill who think they have a right to destroy the striped bass fishery owned by the public. This fishery has co-existed with all the fisheries in the Bay-Delta estuary for 130 years and it has collapsed right along with our salmon, steelhead, sturgeon and the other fish dependent on the estuary. Even in its degraded state it still manages to generate some $250 million annually to our state’s trouble economy.

The issues of striped bass predation should be left to the state and federal fishery agencies that are charged with managing the public’s fishery resources. These are the professionals and scientists who have the expertise know how best to manage our fishery resources.

It is time the Legislature sent a message that divisive bills such as this one will not be tolerated. Instead, the Legislature needs to focus on correcting the ecological crisis in the estuary that is destroying our fisheries, including the immense impacts of excessive water over-allocation and export out of the Delta.

I will greatly appreciate your efforts to help protect our priceless fishery heritage!

Name
Address
Add Your Comments
Support Independent Media
We are 100% volunteer and depend on your participation to sustain our efforts!