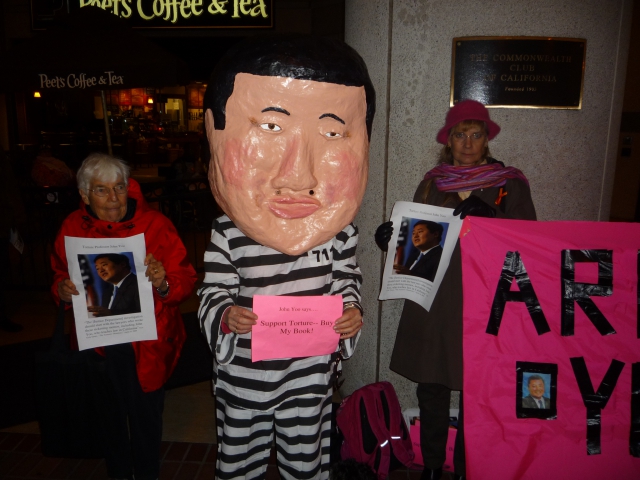 original image (3072x2304)
John Yoo was interrupted repeatedly by anti-torture activists during his book talk at the Commonwealth Club, while protesters stood outside on Market Street with signs saying "Support torture-- Buy My Book!", "The United States Tortures -- Thanks to Yoo", "ARREST YOO", and sang "Tell John Yoo That Torture is a Crime" (lyrics by Vic Sadot to the tune of "We Shall Not be Moved") and "It Had to Be Yoo" (lyrics by Susan Harman.) Yoo's book, "Crisis and Command" argues that the president has the power to illegally wiretap, torture or do anything s/he deems necessary in times of war. Yoo's legal advice was used to allow inhumane treatment and torture of U.S. detainees at Abu Graib, Bagram, Guantanamo, and "black sites" around the world. We call for his disbarment, dismissal from UC Berkeley Law School, indictment and prosecution for complicity in torture and other war crimes.
http://www.codepinkalert.org/userdata_disp...
§CODEPINK's Yoo bobble head made its debut (created by Asher Wolf)
by Cynthia Papermaster Friday Jan 29th, 2010 12:54 PM 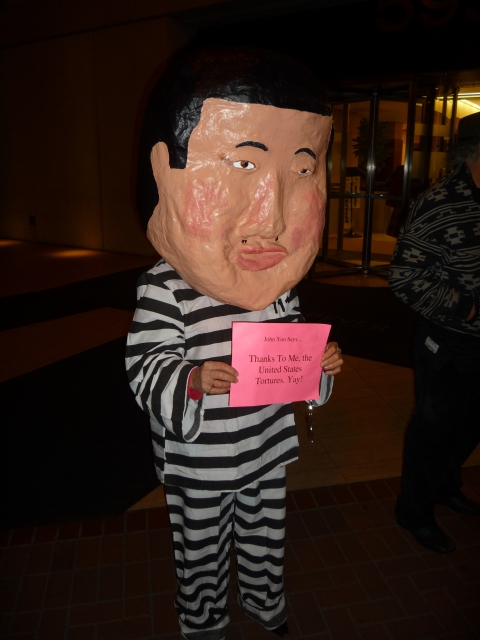 original image (2304x3072)
The John Yoo bobble head was debuted at the SF Commonwealth Club. It will be appearing often at Yoo protests both at Yoo's house and at UC Law School, where the "torture professor" teaches on Tuesdays at 6:20pm.
http://www.codepinkalert.org/userdata_disp...
§Arrest John Yoo
by Cynthia Papermaster Friday Jan 29th, 2010 12:54 PM 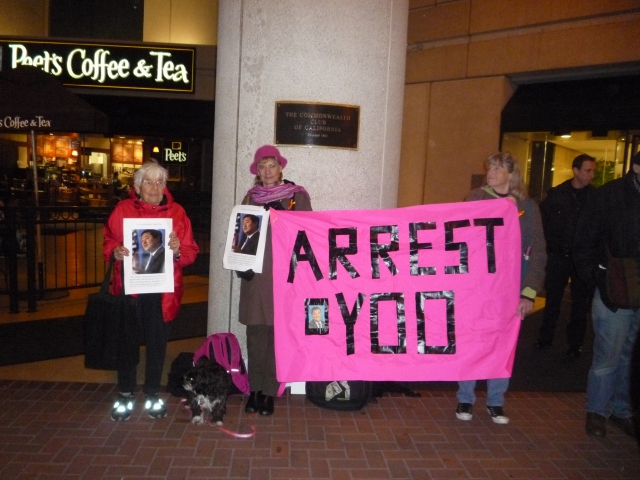 original image (3072x2304)
The United States tortures, thanks to Yoo. Yoo's legal advice to Cheney, Rumsfeld, Bush, etc. was meant to provide legal cover for the inhumane treatment of detainees. Yoo is complicit in torture and should be indicted, disbarred, fired and prosecuted.
http://www.codepinkalert.org/userdata_disp...
Add Your Comments
Support Independent Media
We are 100% volunteer and depend on your participation to sustain our efforts!